The New Jersey Nets still haven't won a game in calendar year 2010, and that shouldn't change after tonight. I harken back to when BJ Armstrong was a Warrior: "We are a bad team." That's the Nyets this year.

Incidentally, with Yi Jianlian in town, tonight is Asian Heritage Night and it benefits a good cause: SF Hep B Free. In short, Hepatitis B, which can lead to liver cancer, happens to be a disease found more prevalent in Asians. Kudos for SF Hep B Free for stepping up and doing whatever it can to spread the word, such as tonight's partnership with the Warriors.

If you are going to the game, there will be an exhibit profiling Wat Misaka, the first Asian to have played in the NBA (actually the league before it became the NBA). The producer of Misaka's documentary will be there.

I almost hate to admit this, but I've been watching the Nets on occasion this season, mostly because I'm intrigued by center Brook Lopez, not to mention Yi Jianlian. The Nets are giving up 102 ppg (compare that with the Warriors' 111 ppg), but I can most assuredly say that the Nets would be around the Warriors' numbers if not for (1) the injuries to Courtney Lee and Devin Harris to start their season, and (2) their pretty solid frontline of Yi and Lopez, but especially Lopez.

Yi's been having a decent year. He's averaging 15 ppg and 7 rpg, both marked improvements from last year. He's not shy anymore and is able to attack the rim on occasion, even a ferocious slam here or there. But Yi's one of those players who needs to hit a midrange jumpshot to feel good about himself, and if he isn't hitting, then it can be seriously downhill. He only went 3-for-13 from the field in the rout at the hands of the Los Angeles Clippers on Monday, but came back with a decent 5-for-10 against the Phoenix Suns on Wednesday.

In the backcourt, Chris Douglas-Roberts may be the only Net to show any heart, perhaps aside from power forward Kris Humphries off the bench. However, he's a bit of a tweener in that he can't really shoot, but he hustles, plays defense and can finish at the rim. He really ought to be a solid 6th or 7th Man somewhere, but on this team, he's a starter.

I have not really been too impressed with Courtney Lee, who the Nets gave up Vince Carter to Orlando for. When the Nyets laid down in the first quarter against the Clippers on Monday, out of a timeout, he was chatting and chuckling with Baron Davis, who was basically cutting him and the rest of the Nets defense up early that night. I just can't stand that. You're supposed to be upset that you're losing and that this man owning you on the court. Maybe this season is lost for the Nets and in Lee's mind, but I think that attitude is part of the problem. This Nets team is really mired in their losing ways and young teams just don't know how to deal with it. It's hard, but you've got to take one battle at a time and just not give up like that. That's the only way to make something out of nothing. But for phenoms like Lee, it's part of their learning process. 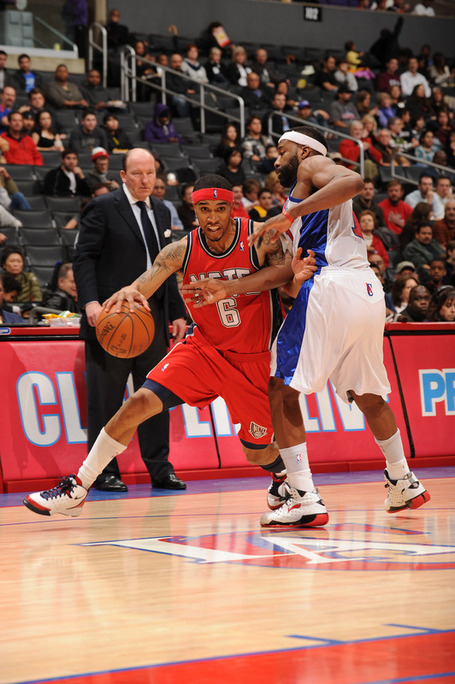 Courtney Lee: hitting a bump in the road

Devin Harris has been playing, well, like he came off an injury. He's been very soft. Not the Harris of almost reckless abandon when he was with the Dallas Mavericks.

Finally, Brook Lopez. If you're in a fantasy league, he may be a good pickup at center because the kid puts up numbers. He's currently at 19.0 ppg and 9.6 rpg, a hair below 20-and-10, night in and night out. He hasn't missed a game all season. He's got a nice, developing jump hook. Once he perfects that as Patrick Ewing perfected the baseline jumper, he'll have his go-to move and you'll see the numbers inch higher.

The only problem with Lopez is that he hasn't seized the leadership role that is so lacking and waiting to be taken on this team. Maybe he's deferring to Harris, but really, Lopez needs to realize that this is his team. Yep, I said it. He is the foundation of this team, the reliable anchor down low.

Also, if a call doesn't go Lopez's way tonight, you'll see him throw up his hands in the air (a lot) and really get upset at a ref, but he's definitely not Rasheed and won't get a technical. The problem with that is, all of a sudden his intensity and energy becomes unfocused. He's losing it all to being upset at the ref when he should pack it in on himself or his opponent. It's too bad he's not a teammate of Kevin Garnett. He could learn a lot from KG in the "focused intensity" department. Because the day he does that, coupled with an "automatic" jump hook, is the day he's selected to be on the Eastern Conference All-Star team.

The Nets' bench isn't all that to write home about, but I like Kris Humphries and his hustle. He's like a Mark Madsen with skills. He scored a career-high 21 against the Clippers on Monday. He actually gets a lot of PT in the frontcourt rotation with Lopez and Yi. Keyon Dooling at times has played better than Harris at the point, but he's not terribly physically gifted and just above-average quick.

Jarvis Hayes, Terrence Williams, and Josh Boone round out the remainder of their rotation and they are pretty accurate definitions of "NBA rotation player". There's also Chris Quinn at third-string point guard. Here's a guy you wonder, how did he get an NBA contract? See, sometimes in the NBA, at the depths of the depth chart, you're just looking for someone who can learn and execute a play quickly, listens to the coach, and never complains. Many fans tend over-estimate what it takes to land on an NBA roster.

That being said, this roster is a disaster, devoid of any outside shooting. I don't think Jay-Z will be giving any Nets high fives anytime soon because they are very hard to watch (Jigga, stay home, the drive out to IZOD Center ain't worth it). And Lebron coming to Brooklyn? Nyet!

I must also say, I don't understand the hiring of Kiki Vandeweghe to coach this team. The roster seriously lacks any energy guys and you go out and get a Mr. Nice Guy to lead them into battle. No, they should've hired a young up-and-comer at a paltry salary, who's just happy to have an NBA job and who will scream at these youngsters to go out and play.

It's not like their core four of Lopez, Yi, Lee, and Harris is all that bad, though. I think they'll need to do some heavy rebuilding of the remaining pieces through the draft. It is absolutely imperative that they have a solid 2010 NBA Draft and perhaps obtain an extra pick or two. This year's draft will be stocked with forwards. Think Al-Farouq Aminu of Wake Forest, Wes Johnson of Syracuse, Evan Turner of Ohio State, or Damion James of Texas -- all of these guys are electric -- to name a few. Maybe they could even draft one of the many solid power forwards coming out such Derrick Favors of Georgia Tech or Patrick Patterson of Kentucky, and move Yi to the 3. It will be an excellent opportunity to fill the void that CDR has to fill right now. They should do that and then some.

Overall, the Nets are simply too young and not quite talented enough. The way to beat this team is to get an early lead, push it to fifteen while relentlessly attacking, because Harris and Lee's defense can become porous after awhile, then put them away with some kind of slam dunk or early-offense three-pointer. Do NOT let this team hang around. If they hang around, then one of the phenoms, Harris or Lee, might have a flash of the future where he decides to take over. We don't want that. 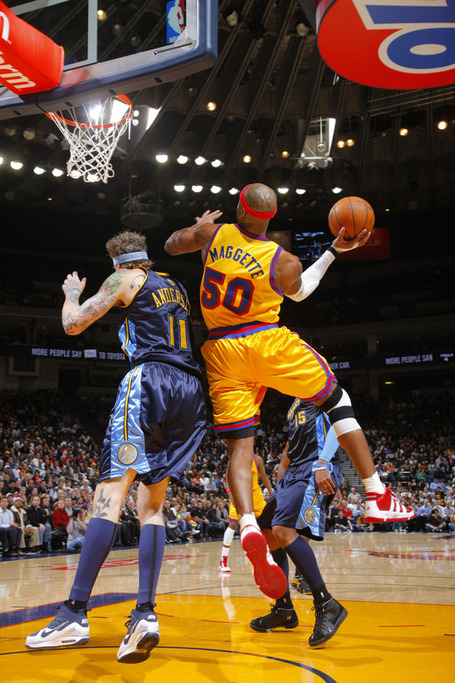 This isn't often said, but the Warriors should win this game, even with only 8 players. Corey Maggette should keep his string of 30+ alive because the Nets won't be able to guard him, and will send him to the free-throw line a lot.

Btw, I love how Maggette is second in the league behind Dwight Howard in points per shot (PPS) -- he's been doing it for years, actually. I used to be a little dismayed by Maggette's penchant for shooting the worst shot in basketball (the jumper with your heel on the three-point line), but he's grown on me. I'll take the ability to get to the free throw line and his PPS along with the somewhat poor shot selection. It's cool, he earned it. He still does take a lot of outside jumpers, though.

It's interesting, the next guard in the PPS rankings is Chauncey Billups. Billups is more of an opportunistic outside shooter than a volume shooter like Maggette. You know as well as I do, Billups has that intangible quality, the one that earned him Finals MVP. I think we may have found something tangible to measure some of that intangibility. I'd like to submit that this high PPS value for Billups coupled with the fact that he really only takes opportunistic shots as a point guard, makes him a future Hall of Fame candidate. Anyways, sorry for the aside.

Harris and Lee don't have the heart to keep containing Monta Ellis if Monta keeps attacking all game long. Let's just hope Monta stays interested. Monta and Stephen Curry should keep the pace of the game fast enough that even career nights for Yi and Lopez would be irrelevant.

Having three D-Leaguers who are fighting for 10-day contract extensions off the bench, against an otherwise average-talented team like the Nets, should yield good results. The one thing that's really hard to do when you're mired in a slump like the Nets are is hustle. The Warriors bench should out-hustle the Nets in every category.

Yeah, I know. Quite a long, in-depth preview for the worst team in the NBA, huh? But that's what I do, I can't help it. An Engineering degree will do that to ya.

Warriors by 15. 30 each for Monta and Maggette. At least 25 for Lopez. Yi's first few shots will determine his numbers for the remainder.