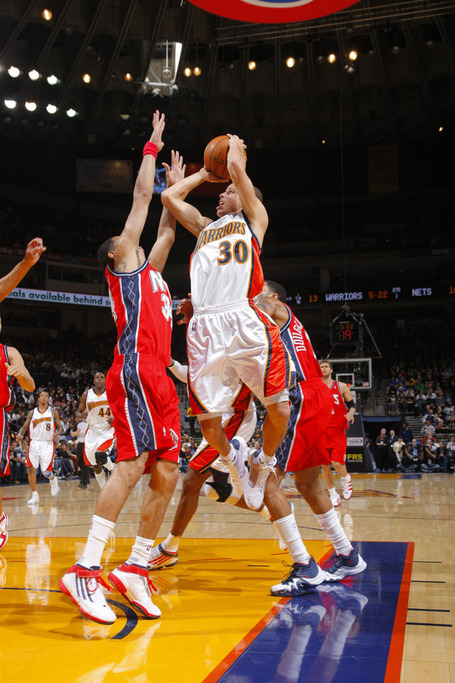 At the 1:21 mark of the 2nd quarter and the Warriors up by 9 on the Nets, Monta Ellis hobbled into the frontcourt and asked Don Nelson to take a timeout, then proceeded immediately to the locker room. He did not return, ending his totals at just 2-for-9 from the field for 4 points, albeit with 5 assists.

It would turn out to be a sprained right ankle. Not his infamous left ankle, which had caused Ellis to pull out of shoot around. As of this writing, we don't know the extent of the injury. X-ray results have not been released. GSoM community, please update us on the latest and greatest.

In any case, the Nets then pulled to within 6 at the half, despite Corey Maggette and Stephen Curry both logging 14 points apiece. So would it be "when it rains, it pours" or would it be "take some bad with the good"?

Fortunately for the Warriors, Curry gladly took the torch from Monta and owned it. With a variety of treys and dipsy-do bank layups, even an attempted throw-down slam on a fastbreak that was met with a semi-hard foul (breathe easy , Warrior fans, breathe easy), Steph scored a career-high 32 points to go along with 7 assists and 4 steals.

Maggette barely missed his 4th consecutive 30-point game, which would've been the first time something like that happened since Antawn Jamison's run back in the day. This time, we got treated to 29 Maggette-O's on 9-for-14 from the floor, 10-for-12 from the charity stripe, and even 5 assists. 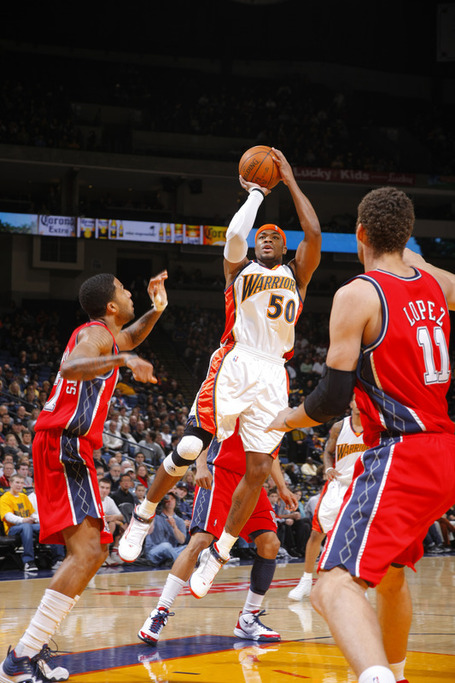 The Warriors got yeoman efforts from Anthony Tolliver and Cartier Martin. Nothing but straight hustle, as predicted, from these D-Leaguers hoping to the extend the time of their lives.

Andris Beidrins and Ronny Turiaf were solid upfront. How about AB hitting another free throw?! How about Ronny with an energy throw-down and some big-time boards?! How about him standing and cheering on his teammates in a 30-point blowout from the bench? Two words: CONSUMMATE TEAMMATE.

In a great non-play early in the game, the Warriors got called for a defensive 3-second violation as Brook Lopez was about to make a move to the hoop, covered one-on-one by Turiaf. The whistle sounded, both Lopez and Ronny sort of paused to see what the call was all about (seemed like both were anxious to get grindin'), then when the call was finally made and play officially stopped, just a brief pause there, Lopez proceeded to continue with the play, to which Ronny responded by bothering his shot.

It was a fun moment for both and neither Ronny nor Brook took it all that seriously, but on the TV broadcast Jim Barnett was remarking how Ronny just has such a great perspective of the game. Play hard but have fun too. You can't say enough about Ronny Turiaf. 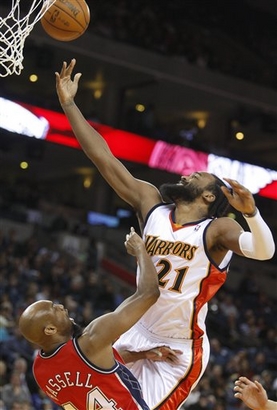 My beard will crush your goatee -- mmpffff!!!

I'd like to break down the matchups, but quite frankly, what for? I mean, the Nets are in a serious state of depression. The past few games that I've seen them play, they've consistently been down by 12-15 points. In fact, the 6-point halftime deficit was probably one of their best halves. The straw that broke the back was probably a give-and-go by Curry to Maggette with 11:40 to go in the 4th that made the score 90-65.

Devin Harris also went down with an injury to his right wrist and missed the entire 2nd half. True to form and per my prediction in the preview, Yi Jianlian came out and missed his first four shots, more of them jumpers than not. Not feeling in the groove from the get-go, he ended with just 2 points on 1-for-6 shooting, although he did pull down 11 boards and blocked 2 shots.

Lopez finished with 21 points, but just 6 boards. I'm not quite sure why the Nets don't just milk him more and more. It may be a far reach to put him in the same sentence as Tim Duncan, but relatively speaking, he ought to be to the Nets what TD is to the Spurs. Big, fundamental, and entry-passed down low often, please. Again, Lopez needs to do his part too, and demand the ball.

Perhaps there isn't someone else in practice for him to beast on. The Nets may want to consider adding a big, perhaps no-name athletic guy -- let's say, oh, Pops Mensa-Bonsu -- just so Lopez has someone to punish and assert some leadership behind closed doors.

Chris Douglas-Roberts, the only Net that has shown a beating heart (Lopez will get his numbers, but he's a bit morose), was a non-factor.

Which brings us to Courtney Lee. Again, another hugely disappointing game. This kid has got to start at least showing some flashes. You've got Harris out with a bad wrist, Yi on the bench because he can't hit the backside of a barn tonight, Lopez taking a breather (aside from Harris, Lopez had the best +/- for the Nets), and yet you still do not take over.

What the Nets need right now is a psychiatrist. Right now, it is all mental. They are not even giving a fight. This against our Warriors who have three D-Leaguers, Devean George playing with pain, a rookie point guard, a forward whose free throw form is worse than that of 20,000 other people in the building, a guy who came back from open-heart surgery, and an all-star candidate who just limped off to the locker room.

Before, you could blame the injuries to Harris, Lee, and Yi. By now, they should be getting back to form, but the horribly lopsided record is affecting their psyche. Having Kiki Vandeweghe helm this is a huge mistake, but I'm sure Nets management said, "You got us into this, you get us out." Still, at what cost? You have a totally demoralized platoon heading into battles they don't want to be in. One problem is, they have gray-haired Del Harris as an assistant. In short, the Nets are devoid of young, energetic, inspiring leadership in all facets, from top to bottom. It is going to take a miracle to get them out of this (a miracle named John Wall, perhaps?). 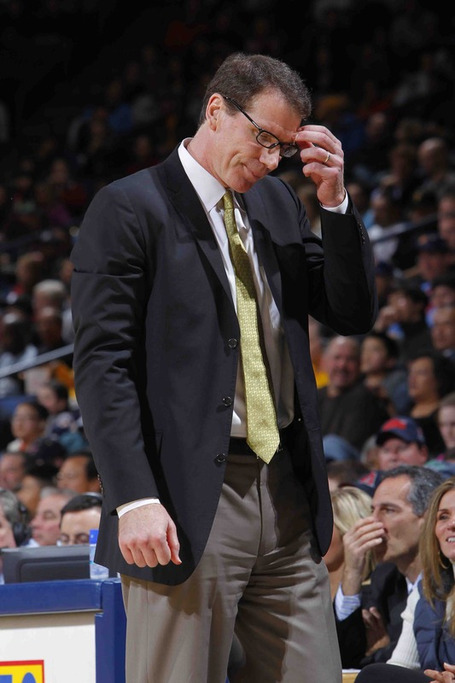 I've looked at the Nets remaining schedule and it does not look good. They have a lot of teams that they will face twice, and it is very, very hard to beat an NBA team twice unless you are an elite team. They must now go 6-34 the rest of the way to tie the Philadelphia 76ers' record for futility of 9-73 from 1972-73. Basically the Nets have to win 1 out of every remaining 7 games.

They have a 4-game homestand coming up, but I see them only winning one of them maybe (Detroit or Washington). Pretty soon, they'll have a natural sense of urgency as it becomes clear that they could wind up as the worst NBA team ever. But by later in the season, it might be too late. They end the season against the Charlotte Bobcats, whom they beat earlier in the season so it's unlikely they'll win the next one, and the Miami Heat. Both teams are vying for playoff spots.

I just don't see it happening. We are literally looking at the worst team in NBA history here.

Well, back to the Warriors. Later today, they face the Phoenix Suns and Steve Nash has got to be feeling good about his all-star selection. The Warriors will have just landed by the time at least a dozen of you have read this. If there's no Monta, it's going to be a long night with just 7.5 players (the new "half-man-half-amazing" Devean!). 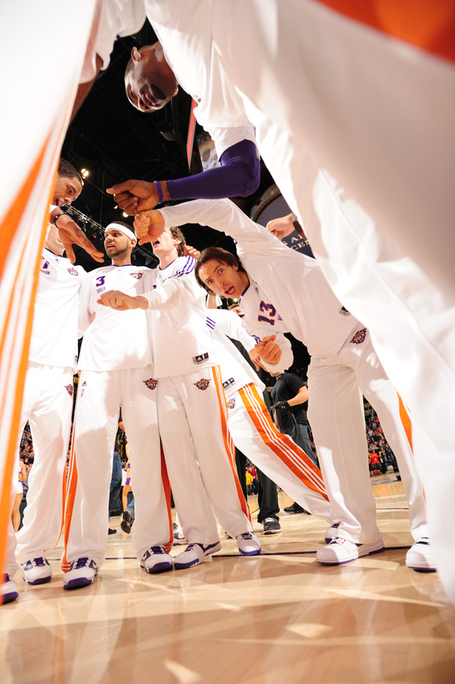 But Curry looked great and you can see his confidence growing each and every game. Guys are starting to rally around him, especially Ronny and Corey. But it's going to be crucial that Steph stay out of foul trouble, as he's the only Warrior who can dribble the ball past halfcourt if Monta's out.

AB seems like he's getting back into the groove (he had a massive putback slam tonight). Tolliver and Cartier are playing their hearts out, although neither of them are particularly gifted in any niche of the game.

However, I must point out: why did Chris Hunter only play 4 minutes? Did Tolliver come into practice and rock his world? Was Hunter late for a team meeting? Is he somehow in Nellie's doghouse? Normally, this would be of no concern, except for the fact that the team may be landing in Phoenix with a skeleton crew.

If Monta's out, Utah better watch out with its 10-day contracts. We're coming after Sundiata Gaines! Wouldn't that be something? Let's hope we don't have to have that discussion.