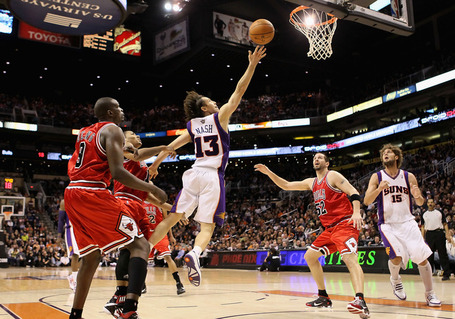 Turiaf in, Monta out. Standard. The Warriors are +12 road dogs without their leader, and understandably so. It is hard to imagine they'll be able to keep up with Phoenix's pace without Monta, and down to one guard. One guard. Roll that around on your tongue for a bit. But the Warriors have astounded the bookies, not to mention this fan, with their effort so far this season. They are now 11-3 ATS in their last 14 games.

The upside to Monta going down is that we'll get a look at how Stephen Curry can run a team. (Even if it's a D-league team.) If last night is any indication, the answer is pretty darn well. The Warriors outscored the Nets by 24 after Monta went down. Curry was dominant, with a career high 32 points, and 7 assists against 2 TO's. And for those of you who continue to insist that he's not a point guard, I believe I heard Jim Barnett say last night that Curry "is as good in the open floor as anyone in the NBA."

50-40-90. Do those numbers mean anything to you? Those are the shooting percentages Steve Nash has surpassed from the field, from three, and from the line, in four of the last 5 years. In the year he missed, it was because he allowed his free throw percentage to dip to 88.9. For shame! Needless to say, these are incredibly elite numbers, that place Nash among the most efficient NBA scorers in NBA history.

Why do I bring it up? Because these are Stephen Curry's shooting percentages in January: 49-44-87. While playing ridiculous minutes, and great defense, for a depleted team, in his rookie season. Something to think about.

Here's something else to think about: Tyreke Evans is about to slip badly in the rookie of the year race. Why? Because Kevin Martin has returned to the Kings lineup. Evans now finds himself in the same situation Curry has been in since the start of the year. He is no longer the only Kings star on the court, and the focus of its offense. He now has to share the backcourt with an established star, and a player that needs the ball in his hands to be effective. There could be quite an adjustment period ahead for the Kings, and Mr. Evans. Take a look at last night's box score to see what I mean.

I guess what I'm saying is that no matter what fresh hell the Warriors encounter this 13-28 season, there continues to something fascinating to watch about them. No Monta Ellis? Ok, I'll watch Stephen Curry take another step towards greatness. I'll watch Corey Maggette continue to confound his critics. I'll watch the D-league all-stars lay it all on the line for a place in the league. And of course, I'll watch Don Nelson, confronted by disaster, delivering one of the most remarkable coaching performances of his career.