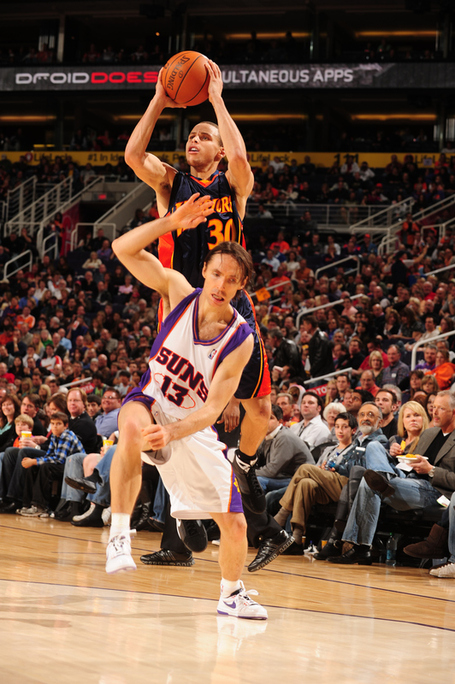 Pants on the ground!

Blog Buddy: Bright Side Of The Sun

The Warriors were playing a road back-to-back. Left at home was captain Monta Ellis, the latest victim of the biblical plague of injuries that has visited the Warriors franchise. CJ Watson took his place on the active roster, pressed into service early after suffering a bad gash to his shooting hand against the Heat. The two brand-new D-leaguers, Cartier Martin and Anthony Tolliver, both played 37 minutes. And yet this Warriors team showed up to play, and gave the Suns everything they could handle for four quarters.

In fact, in the first half the Warriors were the better team. Without Monta Ellis to push the tempo, they came out with a radically different game plan. They controlled the tempo, and rarely got out on the break. Led by the phenomenal defensive intensity of their two D-league call-ups, Martin and Tolliver, the Warriors locked down on the Suns. Both Amare Stoudemire and Jason Richardson finished the first half shooting 3-9. Who says Don Nelson doesn't coach defense?

On the offensive end, the Warriors were paced by Corey Maggette with 17 points, and Stephen Curry with 13 points, matching his counterpart Steve Nash. Perhaps fearful of wearing Curry out, Nellie ran very little pick and roll in this game. Instead, Curry frequently simply dumped the ball off on the wings to initiate isolations or a motion offense. And the Warriors moved the ball beautifully, particularly on one play that featured 6 passes, ending in a wide open three for Cartier Martin. The Warriors went into the locker-room with a 5 point lead, that would have been 8 if Nash hadn't buried a last-second three.

Unfortunately, in the second half the Warriors simply ran out of gas. Curry's jumpers started coming up short, Maggette stopped driving the lane, and the Warriors' offense stagnated badly. On the defensive end, the tired Warriors began fouling, sending the Suns marching to the free throw line, where they essentially won this game, shooting an amazing 29-33.

Still, the Warriors battled gamely until the bitter end, gutting it out on the defensive end and on the boards. And they were right in the game until the play that occurred at 3:12 of the fourth quarter, with the Warriors down 98-95. You know which play I'm talking about, Warriors fans. CJ Watson stole the ball, ran down court and went up for the layup. Goran Dragic went up with him, in what looked to me like an attempt to prevent the basket with a foul. The replay was not perfect, but it appeared that Dragic hit Watson across his shooting arm. I know this much at least: he did not get ball, and yet the ball came screaming off the backboard. The Suns rebounded and scored at the other end. Don Nelson went nuts and drew a technical, and suddenly instead of being up 1, the Suns were up 6 and this one was in the books. 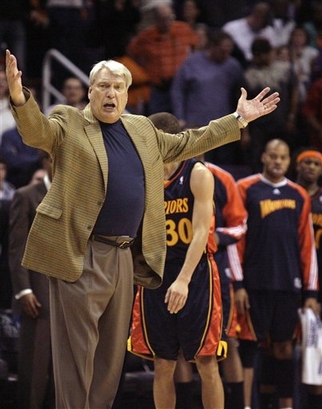 This technical, by the way, had a little history to it. Check out the play at the end of the first quarter, where CJ Watson hit the last second shot while being knocked to the floor. Nelson went nuts on that one too, and if you listen closely you can hear him yell: "I don't give a sh**, call the foul!" Evidently, he said something a little stronger the second time.

Stephen Curry: Curry played a nice game on the offensive end, netting 25 points, although his tired legs began betraying his shot in the second half. His defense wasn't as strong as in past games, perhaps because of fatigue, and perhaps because he was deathly afraid of giving fouls.

For those who were breathlessly awaiting his debut as the Warriors' sole point guard (I plead guilty), we will have to wait for future games. Curry was clearly more of a scorer than a distributor in this game, finishing with only 2 assists. In his defense, I will say that it clearly wasn't Nellie's game plan for him to run pick and roll, or drive and dish. For most of the game Curry simply dumped the ball off and played off the ball. Probably to save his legs. 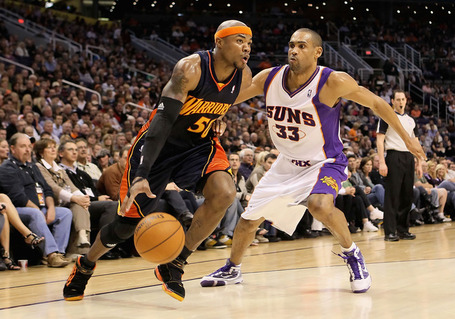 Mini-Malone: My friend Ben, who accompanied me to GSoM night after not watching the Warriors for years, came up with this nick-name for Corey Maggette almost immediately. I think it fits him to a T. The body-builder physique. The fearless, crashing layups. The deadly elbow jumper. The incredible efficiency. Mini-Malone.

Maggette had a great first half, but fell of a bit in the second half when he started relying too much on his jumper. Fatigue was clearly an issue.

The Centers: Beans and Turiaf gave a good effort in this game, combining for 13 rebounds. Unfortunately, the Lopez back-to-back was too much for them. Robin Lopez, clearly the weaker of the Lopez twins, put up 16 and 9 by himself, including 8-8 from the line. And Beans and Turiaf remained completely invisible on the offensive end. Left unnoticed because of Biedrins' horrible free throw shooting problems are Turiaf's own struggles at the line. Turiaf is shooting 50% from the line this season after shooting 79% last season. Chris Hunter was also invisible. The Warriors desperately need more of an offensive contribution from their big men.

The D-League All-Stars: What can you say about the defensive intensity and rebounding that Cartier Martin and Anthony Tolliver have brought to this team? In this game, they also brought some much-needed offense.

Martin was solid, putting up 13 and 5, and playing nice defense on J-Rich. His three point shooting is a nice surprise. 2 for 5 in this game. 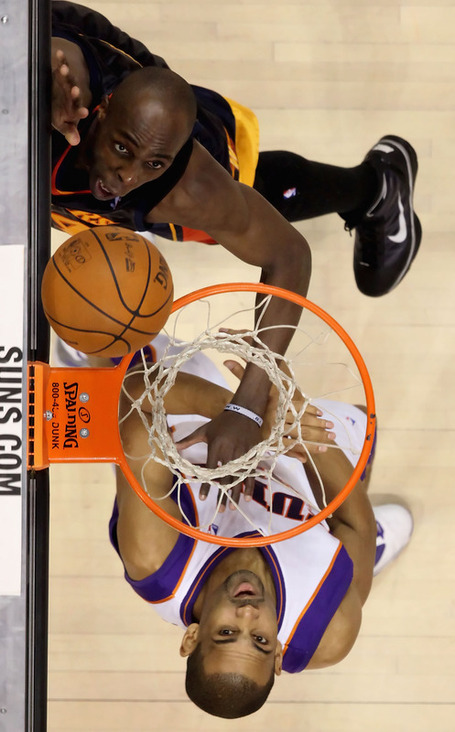 But Anthony Tolliver was simply terrific. 19 points on 9-15 shooting. He's got a soft shooting stroke that encourages me to think that his three-point shooting will come around eventually. 11 rebounds battling Stoudemire, Lopez and Amundsen. And the excellence of his defensive ability is startling. He did a terrific job trapping Nash on the pick and roll. And he was able to guard Stoudemire without fouling. What in the world was this guy doing in the D-league?

Is it fair to ask at this point in time whether Anthony Tolliver is a better NBA power forward than Anthony Randolph? No, absolutely not. So let's do it! On the Tolliver side of the ledger: A solid NBA body, at 240 lbs. Solid defensive fundamentals. Ability to hold his position in the block, and box out for defensive rebounds. Ability to finish his shot against big men in the paint. Shooting range out to the three-point line. And a nice jump hook to boot!

On Randolph's side: 7' feet tall. Blocks shots. Runs the floor like a deer. Handles like a guard. Runs the point center. Has the ability to force most backup centers in the league off the court. Has the ability to be a terrific rebounder and defender, if not always the inclination. Is 20 years old, to Tolliver's 24.

And finally: That face.

One final question: Who in the NBA scouts the D-league better than Don Nelson, errrrr... Larry Riley?

Curry and Maggette were nice, but have been better. I'm giving it to the kid fresh out of the D-league who made it happen for the Warriors on both ends of the court tonight: Anthony Tolliver.