As you can tell from the 2009-2010 Golden State Warriors Midterm Report Grades, this team needs a bold move badly if they have any plans of being relevant in the NBA over the course of the next 3-4 years. There's some nice pieces on the Golden State of D-Leaguers, notably Monta Ellis, Corey Maggette, and Stephen Curry, but that alone isn't going to be enough to qualify for the West's Elite 8 in the near future. 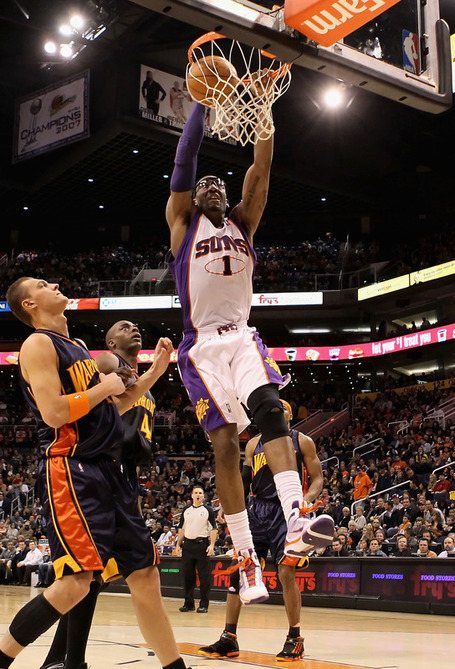 What if Amare was on the golden side?

Is Amare Stoudemire the answer for Don Nelson, Larry Riley, and the Golden State Warriors?

From The Arizona Republic:

Major hang-ups in a possible deal are the Suns' need to get good value in return and the other team's need to feel secure in knowing it has a chance to keep Stoudemire, who can opt out of his contract this summer.

It's also important to keep in mind what MT tweeted about this rumor:

Paul Coro of AZ Republic reports Warriors still looking into a trade for Amar'e Stoudemore. Doesn't suprise me at all

Warriors want a big man bad. But I don't think GM Larry Riley is ready to give up pieces for a guy who wouldn't sign long term

We've covered the Amare to the Warriors rumors at length here at the mighty GSoM, so I'll just direct you to these resources for a historical trace and analysis:

At this point in the season with the playoffs long gone for the Warriors trading for Amare Stoudemire without an extension guarantee at the expense of anything valuable beyond this year probably isn't going to be all that beneficial. I could be sold that acquiring Amare's Bird Rights could be useful during this upcoming summer in potential sign-and-trade deals, but those have historically been incredibly difficult to concoct in this league. It would be quite a gamble to bank on his sign-and-trade value being worth more than what the Warriors might have to send over to the Suns to make the trade happen now.

However, with an extension in place even with Amare's less than stellar rebounding, I'd be down. Amare teamed with Monta, Maggette, and Stef-fun could be very fun. Nellie is the right man to run a creative isolation-based offense to take advantage of all their strengths. Think back to some of the Mavs teams earlier this century.

Amare alone probably doesn't turn the Warriors into an instant top 8 team in the West, but it's a step in the right direction. That move alone though could very well change the perception of the Warriors as a free agent/ trade destination in the near future (read: they're a team actually trying to win instead of just dumping salary). That my friends could actually be worth something- enough to jumpstart the steps to get them to the 2011 NBA Playoffs.

For some Minnesota Timberwolves flava in ya ear check out Canis Hoopus.

For some Cleveland Cavaliers flava in ya ear check out Fear the Sword.

For some Phoenix Suns flava in ya ear check out Bright Side of the Sun.