Sick of reading about the Warriors struggles? (If you're not, then check out 2009-2010 Golden State Warriors Midterm Report Card- Injuries, injuries, and a whole lot of suck)

Sick of reading about Amare Stoudemire rumors? (If you're not, then check out RUMOR: Golden State Warriors, Minnesota Timberwolves, and Cleveland Cavaliers interested in Phoenix Suns power forward Amare Stoudemire) 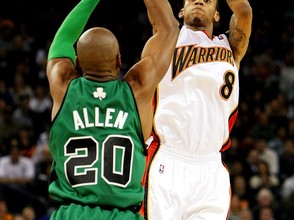 Well to quote the legendary Craig Mack we've got some brand new flava in ya ear... after the JUMP!

While the Celtics have maintained repeatedly that they have no intentions of moving any of their core guys between now and the Feb. 18 trading deadline -- and I believe 'em on this one -- multiple league sources confirmed today that the Golden State Warriors are giving some thought to putting together a trade package that would involve Monta Ellis going to Boston in exchange for Allen.

But let's make things a little more spicier, as in culinary spices:

The Warriors see rookie Stephen Curry as the face of the franchise moving forward. One league source said the Warriors believe that Curry won't develop at the rate they would like as long as Ellis is around.

It's no secret the Warriors need a major shakeup if they're going to even have the slimmest chance at qualifying for the Western Conference Playoffs sometime this decade. Up and down this rostered is littered with young and mostly unproven talents. The highly paid vets on this team have a grand total of ZERO All-Star appearances collectively.

While Monta Ellis is having a superb season considering his Moped Gate comeback, heavy minutes, and lack of help (due to both lack of talent and perpetually injured teammates), it's hard to call him untouchable. He will never be a legit point guard in this league given his seemingly unsolvable high dribble and addiction to the dangerously sweet things in life... like apple TURNOVERS. His defense is vastly improved, but he's not exactly a shutdown defender. Monta's hoops IQ leaves a lot to be desired, especially at the end of quarters and games. His history of tantrums is indeed a huge red flag.

It's also true that the Monta Ellis- Stephen Curry backcourt probably won't go all that far. Baron Davis - Jason Richardson aka BoomRich they are not.

BUT trading him for an expiring contract at this point is just foolish. Absolutely foolish. Ray Allen is on the decline and will not re-sign with the Warriors this offseason. That cap space is worthless for a team owned by Chris Cohan.

Don't get me wrong. I do love Ray Allen. I mean who doesn't love some Jesus Shuttleworth? But this isn't about the Warriors brining in Ray Allen, it's about dumping more money from the books.

But I will remind you all...

For some Boston Celtics hoops madness check out the green show over at Celtics Blog.