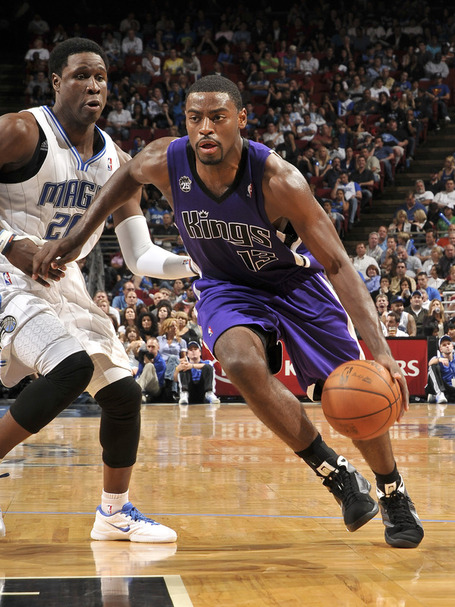 The Warriors meet the Kings at Arco tonight, without Monta Ellis. Ellis is resting his throbbing, surgically-repaired left ankle -- I mean, his sprained right ankle -- for another day before returning tomorrow against the Hornets at home. But if there's a good time to play the Kings without your team leader and half of the rest of your roster, this might be it. Kevin Martin recently returned to Sacramento's lineup, and the Kings have struggled mightily to reintegrate him. After a nice start to the season led by stand-out rookie Tyreke Evans, the Kings have lost 11 of 12 games in January, including 6 straight since Martin's return. Rumblings are starting to be heard in the Sacramento press about chemistry issues in the Kings's backcourt. Can Evans and Martin coexist in the same backcourt? We'll all have an expert opinion after tonight.

Kid Curry against Tyreke Evans! This is what everyone will be watching in this battle of cellar-dwellers. In the last game, Nelson's game plan was to double-team Tyreke Evans as soon as he touched the ball, leaving a non-shooter wide open. That non-shooter was Ime Udoka, who of course responded with 19 points on 70% shooting. The game plan seemed to work in the end, though, as Evans was forced into 6 turnovers, many in the fourth quarter, and the Warriors staged a comeback win. With Kevin Martin taking Udoka's place in the lineup, it will be interesting to see if Nellie employs the same strategy. Martin is a great shooter, but he has not looked like the same player since returning. He was 1-7 in each of the Kings' last two games.

If CJ Watson gets the starting nod, as is rumored, Nellie will probably be forced to double-team Evans. Neither Curry nor Watson is likely to be able to contain him. But Nellie may let Carter Martin try to play him straight up.

The Warriors' other big challenge in this game will be keeping the Kings' big front line of Spencer Hawes and Jason Thompson from hurting them inside. Fortunately, the Warriors themselves are as big as they have been in recent memory. Both Biedrins and Turiaf will play, as will D-league surprise Anthony Tolliver. (A 240 lb. power forward? Let me take a moment to fan myself.) One game after playing well against Amare Stoudemire, I'm looking forward to watching how Tolliver fares against Randolph-killer Jason Thompson.

The Kings are -6.5 home favorites in this game. I have been throwing my hands up in bewilderment at the Warriors' lines recently. I'm just reluctant to guess with the lineup in such flux, and so few warm bodies available. If, however, you had been willing to bet on this courageous Warriors team showing up to compete every night, and Coach Don Nelson getting them into a sound game plan, you would have done very well in the last few weeks. The Warriors are 12-3 in their last 15 games against the spread.