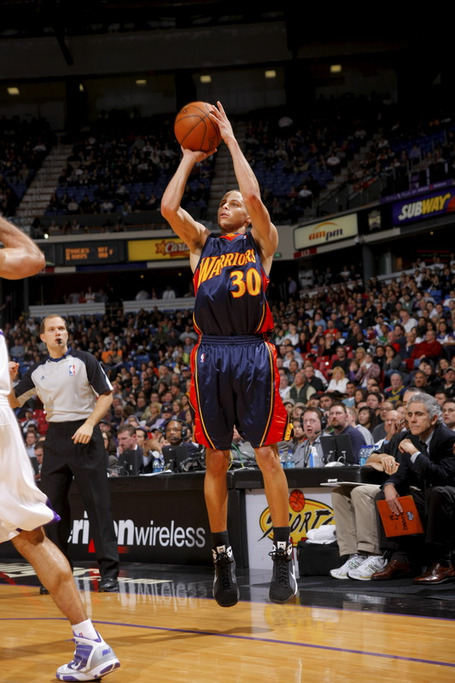 There can be only one...

It's difficult to describe just how ugly this basketball game was. How about this: the Kings shot 38% for the game, and they were the hot team! The Warriors, up to this point one of the best shooting teams in the league, shot 32%. And if you take away Stephen Curry's 10-22, the Warriors shot 28%. Is that ugly enough for you?

Well, how about this: Corey Maggette shot 3-22, after opening the game 0-14. He didn't make his first field goal until 8:20 of the fourth quarter. We're talking ugly.

This game began badly for the Warriors on all levels. Outside of Curry, they moved the ball poorly. Maggette obviously was the worst offender in this regard, forcing up jumpers early in the shot clock. And their big men simply didn't show up to start the game. The Kings killed the Warriors on the boards in the early going, finishing the half with a 38-24 rebounding advantage, including 11 off the offensive glass. Andris Biedrins had only 2 rebounds in the first half.

In the second half, down by 11, the Warriors finally began making a clear effort to share the ball. In their opening possession of the half, a play was run for Corey Maggette. But rather than force up a shot into the sagging King's defense, Maggette swung the ball, and the Warriors wound up with an open Curry three. Biedrins and Turiaf also seemed to up their effort on defense and on the glass. Nevertheless, the Warriors entered the fourth quarter down 13. And by 4:54 of the fourth quarter, the Warriors were still down by 11. That's when Don Nelson went to small ball, with Anthony Tolliver at center, and Maggette at power forward. The small ball Warriors were able to get this game close, behind a big four point play on a made three by Stephen Curry, and the return of Maggette's driving game. They were down only 4 at the 1:00 mark, when Curry created a wide open three for Tolliver on a high pick and roll. Tolliver bricked it, and that was the game. The Warriors cut it to two on a nice Cartier Martin drive with :24 left, but lost the free throw battle in the final seconds.

You could call this a case of too little, too late for the Warriors. But more accurately, it was a case of the Warriors playing with too many inexperienced pieces, and lacking a clear identity on offense. Don Nelson summed it up nicely post-game: "Monta, c'mon back, we need you, baby!" 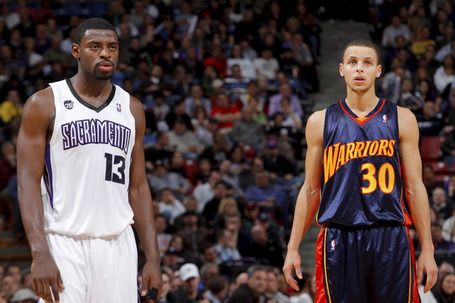 And in this corner...

Stephen Curry v. Tyreke Evans: Warriors fans did not come away empty-handed in this game, because they got to watch a great head-to-head battle between the top two rookie point guards in the league, who are by consensus the leading candidates for Rookie of the Year. And on Tyreke Evans' home court, Stephen Curry clearly dominated this battle. Curry put up 27 points on 10-22 shooting, 9 rebounds, 6 assists against only 1 TO, and 3 steals, against Evans' 23 points on a poor 8-21 shooting, with 6 rebounds, and 4 assists against 3 TO's. And as great as Curry's line was, it should have been much better. Beginning with the first play of the game -- a pick and roll with Andris Biedrins, perfectly executed, but which Biedrins failed to finish -- and continuing through the fourth quarter, Curry set up his teammates time and again with easy looks and layups that they simply could not get to go down. Simply put, if the Warriors had not shot a putrid 28% from the field, Curry would have finished a rebound short of a triple double. 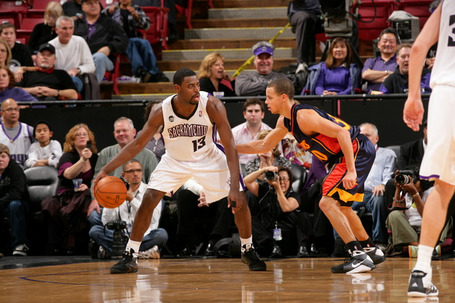 Which is to say nothing of Curry's defense. In the first half, Curry guarded Kevin Martin, who wound up shooting 1 for 9. It's hard to give Curry too much credit for Martin's struggles. Martin simply has no confidence in his outside shot right now. But it's worth noting that when the 6-7" Martin tried to take the 6-3" Curry inside, Curry turned him away continuously, and twice turned him over. This theme played out over and over again later in the game, when Don Nelson switched Curry onto Tyreke Evans.

Evans had abused D-league rookie Cartier Martin and CJ Watson in the first half, bulling his way to the hoop repeatedly. Evans scored 17 points in the first half, on 6-8 shooting and 5-6 from the line. But in the second half, guarded largely by Stephen Curry, Evans was limited to 6 points on 2-13 shooting. In the fourth quarter, the Kings went repeatedly to Evans in the low post against Curry. But again and again, Curry was able to deny him. Unlike Martin and Watson, Curry never once let Evans by him. And when the much bigger Evans tried to body him into the paint, Curry was able to hold his ground without fouling, and slow Evans enough to allow help from his big men to arrive. It was Curry's defense on Evans in the fourth that as much as anything allowed the Warriors to get back into this game in the final minutes.

Watching Evans try to single-handedly take it to Curry in the fourth quarter, I think it became obvious how much better a point guard Curry is than Evans. In fact, watching this game made me doubt whether Evans is really a point guard. He did very little passing or creating for others, and appeared to have very limited vision of his teammates. And his handle under pressure is very suspect. He only has a right hand, and not a very sure one. Evans has a great future in this league, but in my mind he needs to play alongside a point guard. Which may mean that he can't play alongside Kevin Martin.

For those who want the simple version of what we saw: Stephen Curry was +9 in a 3 point Warriors loss, Tyreke Evans was -4.

Evans has a substantial statistical lead over Curry in the Rookie of the Year race, and is likely to carry away the trophy. But this game made my mind up: Stephen Curry is the best rookie point guard in the league.

Quick hits on the rest of the players:

There can be only one. Stephen Curry.