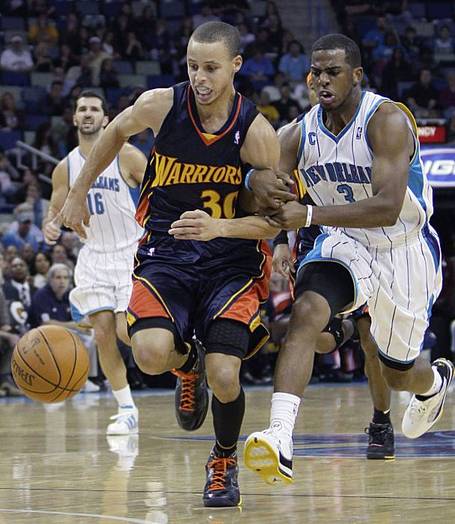 That's how CP3 gets all those steals! Also check out Peja's face. He's trying so hard.

I have a secret list of 100 reasons to watch the NBA. Chris Paul happens to be at #14. I just have to fill in 1-13 and 15-100. Off the top of my head, LeBron is probably #1,2,3,4 and 5. More reason to hate LA is top #9. Watching the Warriors just narrowly misses the list, coming right after watching Biedrins shoot free throws, listening to Bill Walton ("Throw it down big man!"), and watching Eddy Curry run up and down the court.

Everyone expected the Hornets to be better than their current record. They're currently 9th in the West behind Memphis of all teams. Their record is the result of early season struggles with and without Chris Paul. But ever since CP3 came back from injury on Dec 4, the Hornets have gone 17-9. The Hornets are back and playing better than ever. They'll make the playoffs. It's just a matter of time before they're back in the top 8 (barring anymore injuries).

The Warriors better be prepared and ready to play. They're coming off a tough loss in Sacramento, let's see how the team responds on the 2nd day of this back to back.

I had an interesting conversation with a friend who is a Rockets fan. I told him the Rockets should trade Brooks, Landry, Tmac's expiring and Chuck Hayes to the Hornets for Paul, Peja, and Posey. Houston gets a superstar while taking on the Hornets bad contracts. New Orleans gets the salary cap relief they seem to want plus a couple young up and comers. I jump on that deal if I'm Houston. My friend? Was not having it at all (he's a big homer). He didn't even consider it. I ask him if the Rockets made an equivalent deal for Dwyane Wade and he said, "OF COURSE!" without any hesitation.

Are Dwyane Wade and Chris Paul that different in terms of value? I don't think so. I'd probably rather have Wade, but I could easily be persuaded to take Paul.

It has to be the market he's in. If Chris Paul played in Oakland (please? I'll give up any and everyone), New York, LA, Chicago, or Miami, he would definitely be more popular and I think my friend makes that deal. I guess this is my long winded way of saying, Chris Paul is freaking amazing and doesn't get the respect he deserves. Sure he and his team flopped in the playoffs last year, but I'm thinking that won't happen again. He's the best PG in the game.

Corey Maggette cannot shoot much worse than he did last night. Forget that game. Throw it out. It'll never happen again. He'll return to his usual efficient ways.

Steph Curry impresses me every time out there now. He's stepped up in Monta's absence. Heck he even played well with Monta there. He's shooting lights out from 3 and is the best ballhandler and passer on the team. Last night, he even outplayed everyone's favorite for ROY, Tyreke Evans. And the Warriors will finally have an All-Star Weekend representative other than a Warrior girl or Thunder (R.I.P.).

Check this out from David Thorpe at ESPN:

Curry may be the only guy in the West who can win the Rookie of the Month award other than Evans. He has been red-hot in January, averaging 19 points, 4.3 rebounds and 4.4 assists per game while making 48 percent of his shots overall and more than 50 percent from 3 (28-for-55). His strong play has also helped the Warriors win a few games and stay competitive in a couple of tough losses.

Now that he's adjusted to the pace of the NBA game, it seems like he's moving at just the right speed. He's already the best in this class at utilizing a shot fake -- a potent weapon when used by a great shooter, but one that he struggled with early on because he was playing too fast. These days, he'll use it even when being closed out with two seconds on the shot clock, knowing that he still has plenty of time to fake, dribble and shoot from an open spot.

As a passer, he's still too casual with dishing off ballscreens sometimes, forgetting that seeing an open man is just the first step; delivering the ball to him is equally important. This is just part of the adjustment process. He'll soon learn to get the open man the ball with patience and craft, or just by using a better passing angle off the dribble.

Oh yea, Monta is supposed to be back tonight. I say he plays "only" 44 minutes.