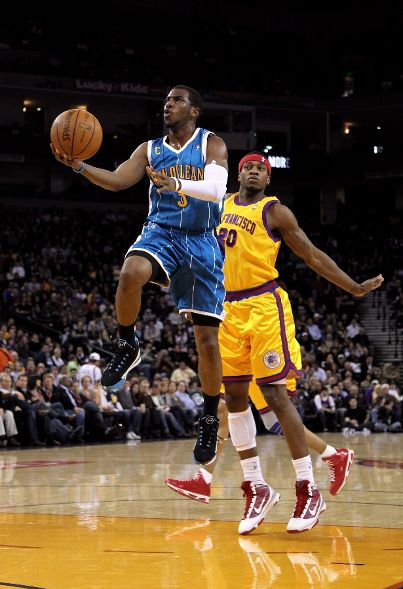 It was all Paul tonight. Plus Cartier's lookin' sassy!

I'm turning the tv off.

It's the third quarter and the Warriors are down by 24. Darius Songaila just hit a circus shot. I don't even think he looked at the rim. It was a drive to the middle of the lane, he stumbled, threw up a hook shot praying for anything, and it went in. When that happens, it's over. Songaila's circus shot = you're done.

It was a 7 point game at the half. What happened? I'll tell you what happened, the Warriors got badly outplayed in the 3rd quarter, couldn't grab a rebound and couldn't play defense. In the 4th they were at one point down 27. Sound familiar? 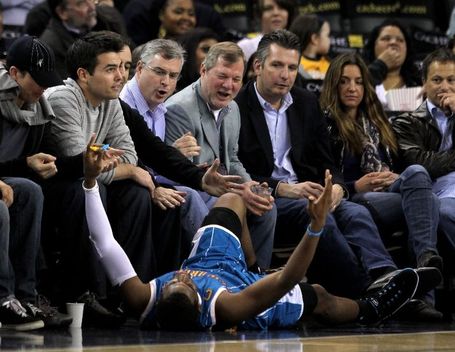 Give me a hug. Chris Paul after knocking down a 3 and getting fouled. The man in the gray suit is not amused.

The Hornets are one of the hottest teams in the league right now mainly in part to Chris Paul's dominance. Even on a night where Paul had 7 turnovers (he averages 2.4), he still dominated. This time he did it with his scoring, 34 points, 13-18 from the field and 7-7 from the line. He scored in the paint, off jumpers, from 3, and at the line. Throw in 8 assists with 3 steals and he had quite a night. Guess what, he did that in only 3 quarters. He only came into the 4th at the 4 minute mark. He finished with 38 and 9 assists.

The stats don't tell the whole story either. With the ball, he gets anywhere he wants on the court at will. You can try to stay in front of him but you won't be there for long. On defense, he hounds you. He's always looking for a steal and does a good job of moving his feet on the perimeter. He's an absolutely amazing player and after tonight I might have to move him up my list from #14 of 100 reasons to watch the NBA.

Okay I'm done with my infatuation with Chris Paul...for this recap. 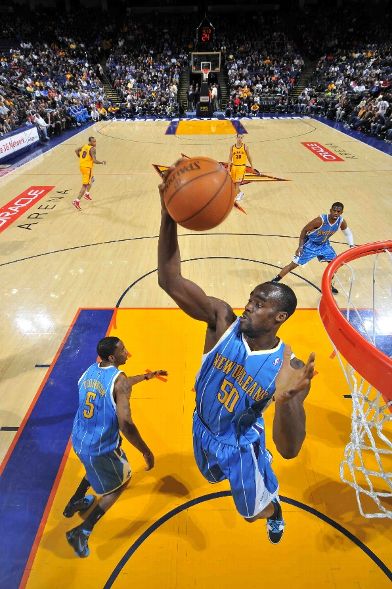 Rebounding and Defense
Hey, let's get out-rebounded by 15 and see if we can win the game. The rebounding disparity was even worse at the end of the 3rd quarter. Emeka Okafor had 12 boards, David West had 12 boards, and Chris Paul had 6. Those 3 combined had 1 less than the Warriors 31 total as a team. Or here's a better stat. The Hornets point guard, Paul's 6 boards was more then the Warriors starting center, starting power forward, and both backup centers. Monta led the team with 6 rebounds. That's just not going to get it done. Box out, hustle, and go get the ball. If you're playing small you better earn some hustle points or else you just aren't going to win.

I'll be honest, the Warriors had been playing much better defense lately. They were holding opponents to reasonable shooting percentages. Tonight was the return of poor defense. A lot of that is because they couldn't grab a rebound and Chris Paul barely missed a shot.

One bright spot in the defense tonight was that they did a great job turning the Hornets over as the Hornets ended up with 24 turnovers. The Warriors got their hands on a lot of balls and had 14 steals. 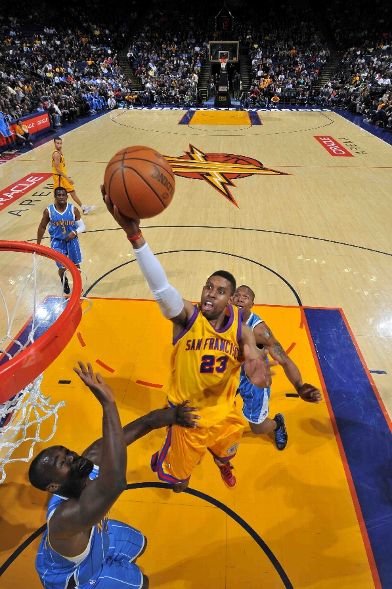 Offense not Offensive
The Warriors offense tonight was a huge improvement on last night. It's good to know that they can bounce back offensively after such a horrible game. Tonight, they finished by shooting 50.6% to go with 31 assists. That's a ton of assists. By comparison, the Hornets had 18. The ball movement was crisp tonight. They were finding Andris open under the bucket for easy layupts and dunks. Guys were hitting open shots and the ball moved around the perimeter to the open man. It's the kind of offense you expect from a Nelson coached team.

The one bone to pick offensively I have tonight is with Steph Curry. Is it me or did he seem to be way out of control tonight? He seemed to fumble the ball a lot, lose it in traffic, and just make careless decisions. His numbers look decent - 15 points, 5 boards, 8 assists, 3 steals, and 5 turnovers, but after watching the game all I can think of is him fumbling the ball as he went through the lane. Even if he didn't turn it over, he still fumbled it numerous times. Maybe he's tired from playing all these minutes.

CJ Watson for his excellent shooting. Unexpected and pleasant boost from CJ tonight.