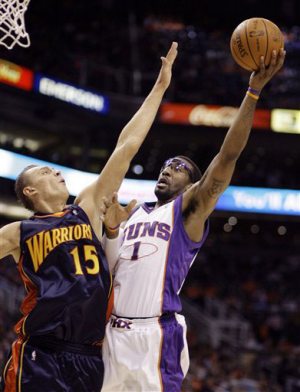 What if these two were the starting 4/5 for the Golden State Warriors?

Our man Seth Pollack has the info over at Bright Side of the Sun in Amare Stoudemire to Golden State Warriors For Corey Maggette?, so I'll direct you to his piece. But here's a little snippet:

No seriously, we still have our standards. This "rumor" comes from an anonymous source on a message board, but he/she has proven over the years to have gotten some things right. And really, if you want to split hairs over Internet ethics just call this "speculation" instead of "rumor".

Now the first thing you'd have to worry about from the Warriors perspective is whether Amare would just opt out his contract this offseason and bolt for brighter hoops pastures. Corey Maggette is having an outstanding year for the Warriors as evident by his solid A grade in the 2009-2010 Golden State Warriors Midterm Report Card. Why give him up for free?

But the thing is you have to have a little faith. WE BELIEVE in Mr. Ellison: Oracle CEO Larry Ellison trying to buy NBA franchise Golden State Warriors

Seth puts 2 and 2 together in his piece on why this trade might actually make sense for the Warriors. I don't know about you all, but selling high on Maggette for the chance to retain Amare and maybe even expedite Chris Cohan's sale of the Warriors? Sign me up. (Definitely check out Seth's piece. It's worth the cost of a click.)

Here's some Amare Stoudemire to the Warriors, Corey Maggette to the Suns trades that pass the ESPN trade machine check and give the Suns a number of expiring contracts: