Hey GSOMers, it's da Commish coming to you live and direct from Aloft Hotel in Portland! I'm up here in the Pacific Northwest to kill three birds with one stone: a little family R&R, a drive up to Key Arena in Seattle to see Jeremy Lin play (more on that later today in a separate post), and back to the Rose Garden!

Two summers ago, I wrote a man-crush NBA Summer League scouting report on Jerryd Bayless entitled "Blazers/Bayless envy". I must say, seeing these Blazers and their fans in person, minus Bayless not really having a huge impact in this game, I've still got Blazers envy. Nice arena, great atmosphere even when walking there, right in downtown (as opposed to the Roaracle parking lot jam or that boring walk over to BART). 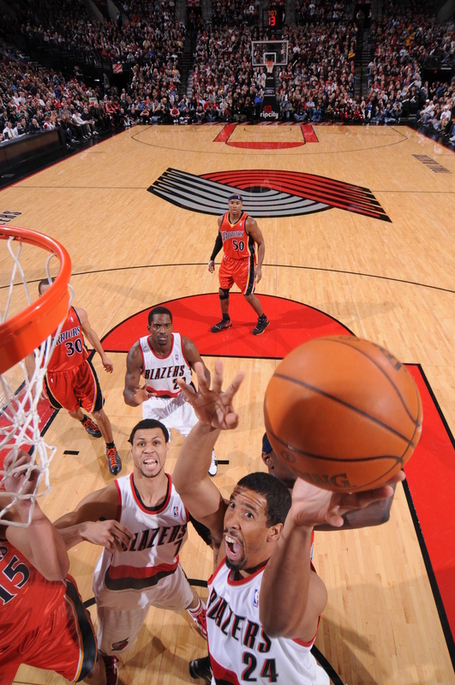 Note to CJ, Monta, and Steph: SCOWLS is what wins you ballgames (oh, and beasting o-boards!).

This is my first-ever recap and I don't really know what I'm doing, so bear with me. After all, we have a streak of 5 straight years without a missed recap to uphold. And I trust you guys will carry the conversation on in the comments, irregardless of how "We Suck" my recaps are.

If you want the short version, here it is...

Now, the long version. I might want to preface by saying that my soul as a Warriors fan was ripped to shreds after Cohan traded C-Webb the very moment I went all-in and bought season tickets. Man, we had Tim at the point, Spre at the 2, Mully at the 3, and many people forget, Rony Seikaly was averaging a double-double at the 5. We were on our way to our own version of "Rip City".

But as I said, my soul disintegrated and I went Bram Stoker Dracula and denounced my allegiance as long as the Warriors were under the regime of Cohan. Many years later, I'm a commish of a rec basketball league, and it fits. I don't really root for one team, and as a result of not being all-in, I don't feel the privilege of euphoria when something great happens (like "We Believe"), but I can let go pretty quick when there's a loss. Most of all, I have an unbiased appreciation for just good ballin' and well-run franchises.

Back to the game. So I was speeding 95mph down I-5 and took a wrong turn -- or maybe it was my subconscious wanting me to drive over many of Portland's cool-looking bridges. Anyways, I didn't get there until the first quarter was over. Figures. Well, at least I saw the rest of the game. BlazersEdge didn't!

Supposedly, the Warriors came out with a 16-3 run and Monta was getting his thing going, with 13 points on 5-for-8. Marcus Thompson (@gswscribe) tweeted:

There is not a single guy in Portland who can guard Monta Ellis. If he finishes well, he will have a huge night

As I found my way from a parking spot (free!) to the Rose Garden, a scalper gave me a Row L ticket for just forty bucks. As I walked into the arena, I heard one of the many LCD TVs in the lobby say, "Well, that was just about the worst quarter you'll ever see from the Blazers." Turns out, it was the most points the Blazers had given up to any opponent in any quarter this season.

I'm not sure that first quarter really happened. You know, does a tree fall in the forest, that whole thing. 'Cause when I got there, it was sure the same old Warriors to me!

As the 2nd quarter started, the Blazers got some early momentum which of course included a couple layups from Brandon Roy, but also a very awkward-looking baseline jumper from Juwan Howard that somehow went in. Anthony Morrow put an end to that momentum with a thunderous dunk. @gswcribe couldn't believe his eyes either!...

Was that a dunk by @BlackBoiPachino?

The awkwardness of Juwan's shot would come back to haunt Warrior fans.

Meanwhile, Blaze came by to take a picture with a cute kid. Awwww! Can you say, Blazer envy?! Made me miss Thunder. 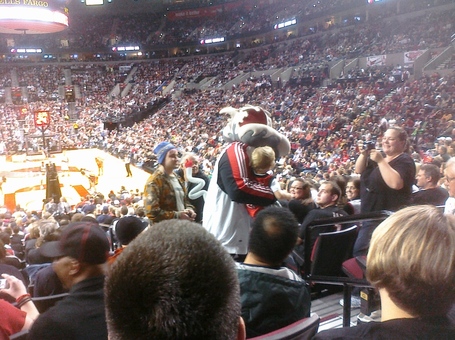 Then Juwan hits yet another weirdo baseline jumper! Something's not right. It starts feeling like the Warriors dwindling lead is about to disappear.

They show the injured Rudy Fernandez in his suit, sitting behind the Blazers bench, on the big screen. A big roar comes over the Rip City crowd. You could really feel the fans getting behind their team. The Blazers cheerleading squad does flips and drops and stuff (yeah, they have a cheerleading squad in addition to the Blazer Dancers) as they blast the Vengaboys "We Like To Party". That song seems to always be a remedy! I wonder if it would work at Roaracle.

So anyways, B.Roy and Andre Miller start running the old back-in-on-diminutive-defender play against the Warrior backcourt. It just amazes me how B.Roy is able to get his own putbacks. It's like a trademark of his. Sure, this was against Monta, CJ, Ammo, and Steph, not the most fearsome defenders, but I've seen him do it against other teams too. As Madden says, "I love his stick-to-it-iveness".

Funny thing is, Ammo comes back with the same play on Bayless, except Ammo takes a fadeaway that rims out. I don't recall the Warriors ever going back to that, to at least targeting the potential Bayless mismatch.

Still, the Warriors manage to answer back a few times. Monta with a few layups, including one where he attacks left side of the lane, almost using his head as a spear to get past B.Roy, trips, and finger rolls it in for his 23rd point out of an eventual 30-point night, cutting the lead to 72-71 Blazers in the late third quarter.

The Blazers call timeout and all of a sudden I feel like I'm in a scene from Bladerunner... 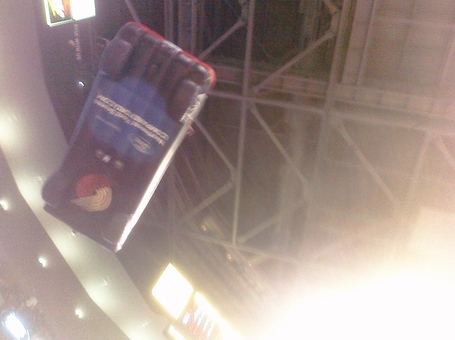 That cool floating blow-up car you see on high drops envelopes with who-knows-what inside. Kinda cool. Just when I thought that would be an omen for the Warriors, out of the timeout, Anthony Randolph anticipates a Miller entry pass and with his long arms, steals it.

But CJ Watson misses a jumper at the other end, a rather big gamble of a decision considering the rare good Warriors defensive sequence. As I've heard frustrated teammates in my rec league say to each other, "We worked too hard for that!"

Then, perhaps the last play before the Warriors fell off a cliff occurred: Monta scissors around the Blazer defense and finds AR for a MONSTER dunk!... 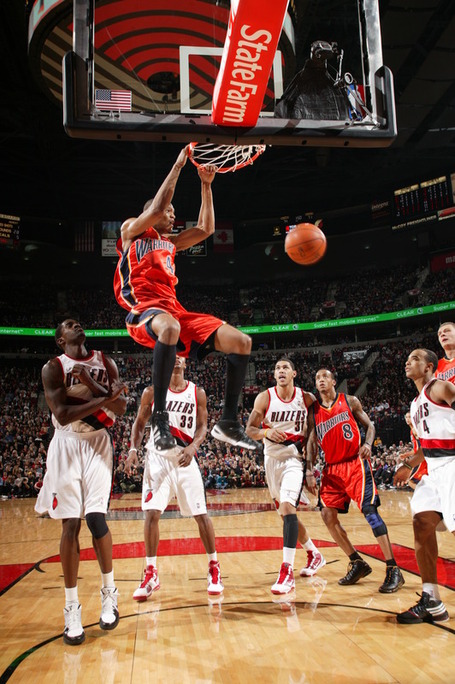 This cuts the Blazer lead to 73-74 with 1:49 remaining in the 3rd, but unfortunately, AR gets called for hanging on the rim. Miller hits the technical and 75-73 would be as close as the Warriors got for the remainder of the game.

As the 4th and final frame started, Stephen Curry set the tone by taking an early trey with a hand in his face, bricking off back rim. On the next possession, CJ tried to draw a bump foul that wasn't there on a jumper, one of his 0-for-8 from the floor -- is he playing for a free agent contract next year? At that point, I sensed another Warriors meltdown and started this string of tweets on my @nbalivetweet account...

Missed early trey by Curry, missed bump jumper by CJ, what's the next possession for Warriors?

Sure enuf, next possession for Warriors is a Randolph airball trying to draw contact. Next?

Catch n shoot Curry with hand in face no good. Next? CJ wide open worst-shot-in-basktball (foot on trey line). Next?

I just can't stand the Warriors decision-making. And to me, this traces back to the coach. Maybe the Warriors tune out Nellie. Later in the game, AR took an ill-advised trey and the Blazers came down and got to the free throw line. Nellie called AR over to the bench, AR was a little slow in getting there, and I distinctly recall noticing that whatever Nellie said to AR, there was no acknowledgement nod that you normally see from a team that cares. You got CJ uncharacteristically ball-hogging. Everyone's just getting theirs. There's no semblance of an offense, there are no plays being called, nary a high-pick-and-roll (the staple of the NBA), other teams seem to be able to sign big men (even the Wizards!), and there's zero heart/pride on defense. To me, this traces back up to the franchise. It's very sad to see.

By contrast, here's what the Blazers are all about (this is right outside the Rose Garden)... 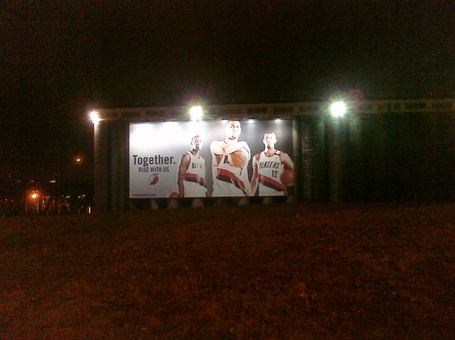 I'm also just sick and tired of Nellie small ball. You look at the boxscore and you see this: Andris Biedrins 3 rebounds, Ronny Turiaf 2 rebounds. But on just 20 minutes played and 13 minutes played, respectively! Against a depleted Blazers team. That. Has. No. Front. Line. DUH!!!

I was here for Run TMC. Heck, I was there when a rookie Mitch Richmond dropped 50. Run TMC was fun, but back in those days, even Nellie knew that wouldn't last. So he rebuilt the team and got C-Webb as the final piece. Great. There has got to be a smidget of common sense left in Nellie's brain, no?

The last 6 minutes of the game epitomized the resiliency of the Blazers and the futility of the Warriors. Really, the Blazers were almost playing with six players because Bayless was subpar (2-for-11) and newly acquired Shavlik Randolph was as green as a rookie can look. Monta missed a layup that would've cut the lead to four points. Instead, it was 86-80 Blazers with 6:20 to go.

The lead grows to double-digits and apparently the Blazer CheerStix worked on AR, who only went 3-for-6 from the line in the 4th quarter... 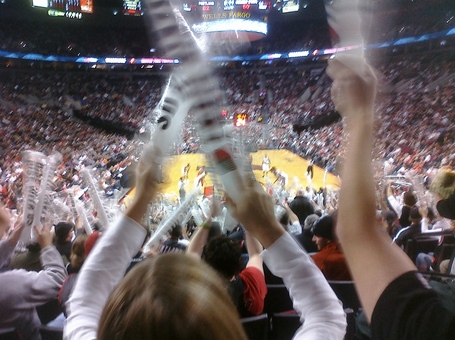 [Btw, if there's a Blazer fan out there, I've got some unused Blazer CheerStix they gave me if you want em. Don't know how to arrange this, though, as I doubt I'll have time to read the comments.]

I'll end it with a string of tweets that represent recurring themes of the game...

Why CJ just shot that trey, I have no idea. Anyways ball out to Warriors, Maggette draws two FTs.

Beautiful spin pull up by Monta, but Roy gets alley from Miller.

Morrow about to check in. Isn't it a lil late? B.Roy patented hesitate left jumper.

And, of course, to chants of "MVP", B.Roy drains that jumper that gives him 37 for the game, completely overshadowing Monta's 30. I mean, you just have to tip your hat. 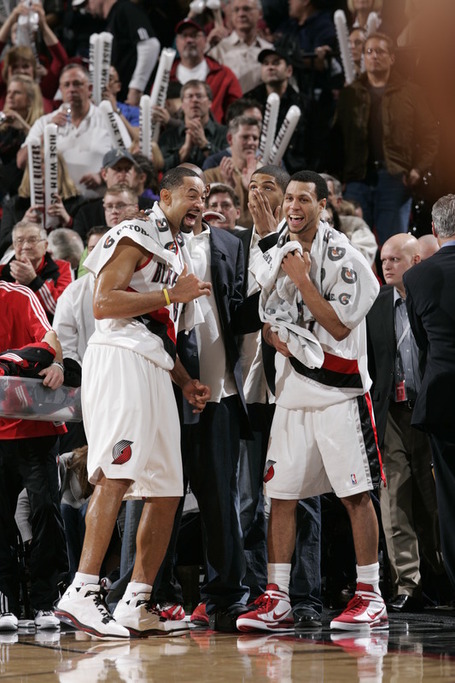 I hear Rowell's got a new logo and brand strategy for next year. Whoop-dee-doo. 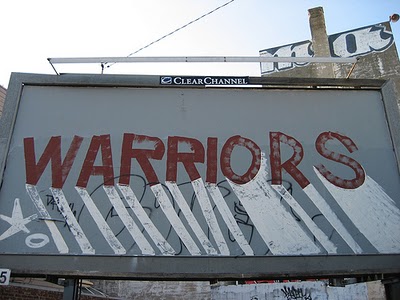