I've tried to be the bigger person more often than not. Most of the time in situations like this I'll address our injustices with the caveat that we as a team shouldn't have allowed us to be in the situation to begin with. And by the end of this recap, I'll likely end up doing the same. But last night... man... That was a tough pill to swallow. I've watched (last night and this morning) the comments ensue from the GSoM community about whether or not a foul was actually committed. For once, I'm going to step out of impartial mode and actually offer out my opinion on the matter.

Whether Monta's arms were straight up or not, whether he made some minor body contact or not, if a ref is going to call a foul in the final .4 seconds of the game, ESPECIALLY one that determines the outcome of the game; it had better be an obvious hack. The mere fact that we all had to watch the replay 50 times from 50 different angles to see if contact was made means that call was questionable at best.

Am I going to write an entire article on the last few seconds of last night's game? As tempted as I am to do so, no, no I'm not. But, deficiencies in our play aside, I do feel like we earned that win. And that's all I'll say about that. 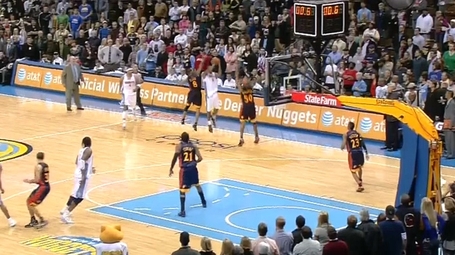 Hit the Jump to step away from the short term and look at the long term. Neither view looks all that pretty...

A loss like this is especially tough to swallow with some of the performances we saw last night. Although Monta's 32 came off of a lot of shooting, few can argue with his late game heroics. Stephen Curry was in excellent for last night, ending up with 26 points, 5 boards and 6 dimes, and Mr. Hot or Cold Maggette ended up very much on the side of hot with a season-high 35 points. Those are three very potent weapons to be firing at the same time, and against a Chauncy-less Nuggets team, it should have been enough.

But behind every last second loss lies a web of mistakes. Despite our fury on that call in the final seconds, last nights game very much resembles a mushroom. Crowining above the soil for all to see was a trio of poor calls in the final quarter. Timeout miscues and questionable foul calls will forever serve as the easily viewed reason for this loss. Underneath the earth, however, an intricate web of general small ball woes, most notably offering the Nuggets a wealth of 2nd chances that allowed them to get within striking distance.

GSoM longtime friend and contributer Adam Lauridsen may have put it best:

The Warriors put the refs in a position to influence the game by giving the Nuggets second chance points, open access to the glass, and the gift of totally unnecessary contact on Smith’s last-second fling from half-court.  The refs did the Warriors no favors — and the Ws would have won but for any of the questionable calls — but blaming the refs for the team’s failure to secure the win is the easy way out.  It’s another excuse, and another obstacle to any lasting improvement.

What else is there to write really? There's a staggering amount of truth here. We can point to the fact that our centers weren't in top form; we can point to the fact that we may never win the rebound war when we really need to, but the fact of the matter is right now we just don't have the tools to get it done. A good team is once that can adjust to the deficiencies of the squad. We're a team that seemingly cannot win a game unless every single thing goes right. Even with three of our starters in (arguably) top form, we still find ourselves in a last second situation against a debilitated team?

Unfortunately right now we have to feel both.

This is a tough one. Maggs, Curry, and Ellis can all make solid cases for why they should be taking this one down. But I am going to give this one to Mags in the wake of his season high scoring. Unfortunately, he tends to be more cold than hot, but hopefully last night's performance will help motivate him to play towards his true potential.