If there's a technical definition of comeback it probably started in the 3rd. Warriors trailed by 18 midway through the 3rd and every indication suggested the indignation of a blowout loss at home to a rival division bottom-feeder.  There was not much good to look at.  Our second-year-end-of-the-lottery big man crumbled to the floor clutching his ankle after 12 minutes of play.  Their 2nd year end-of-the-lottery big man had an off night, but was still in the game.  Our rookie point guard played ok, making half his shots, twice as many assists as turnover.  Their rookie point guard kept banging on the rookie of the year door.  There wasn't even solace in watching Spencer Hawes suck, as Westphal kept him on the bench for most of the game, and when he played, he showed the sort of offensive moves that might fool someone into thinking that he did not suck. That triple fake-spin-shake shoot shot of his in the forth to end Monta's personal 7-0 run was nasty!

I was hoping that my GSoM amigos were enjoying the camaraderie of their fellow sufferers, as the product on the court wasn't much for lifting spirits.  Every glimpse of Warrior hope seemed to be eclipsed by a bigger shadow of doubt and dispair .

(Continue after the jump.  It got better.)

And then the 4th quarter happened.

It started to change exactly 9 seconds into the 4th when Monta gets fouled on a jumper from just beyond the top of the key.  Two points from the charity stripe to close it to 8.  SAC brings the ball up and the Warriors defense appears to care.  SAC turns it over, Monta charges down and dunks; 6 point game.  SAC turns it over again, Monta nails a three to cut it to three behind a solid screen by Ronny Turiaf, exactly the sort of open look three that a small-ball team has to figure out ways to take.

There was a different atmosphere from that in the previous 36 minutes of the contest.  SAC didn't fold immediately, but There were things happening that normally do not normally happen.  Our guys stuck to the Kings like hyperactive shadows on defense, taking away easy looks and paths to the basket.  Tyreke Evans (who appears on his way to scary good basketball beast-hood) had half of his 6 turnovers during the final quarter.

It was clear that something was different.   Radmanovic even dribbled it through traffic to push it home with authority!

Some back and forth kept it in doubt for a while.  Even after cutting it to 1, the Kings' short burst pushed it back to seven and there was every opportunity to fold it up and quit with an "almost, but not quite."  But at 4:38 to go, that's where it stopped.  The Kings weren't going to get the ball in the bucket until sinking a meaningless bucket in the closing seconds of the contest.

Monta's 38th and 39th points at just under 3 minutes to go put the Warriors up by 1.

You want reasons?  There's a few.

(I do not want to think about the potential severity of Randolph's injury.)

Warriors Wonder:  Are you kidding me?  Is there any doubt? 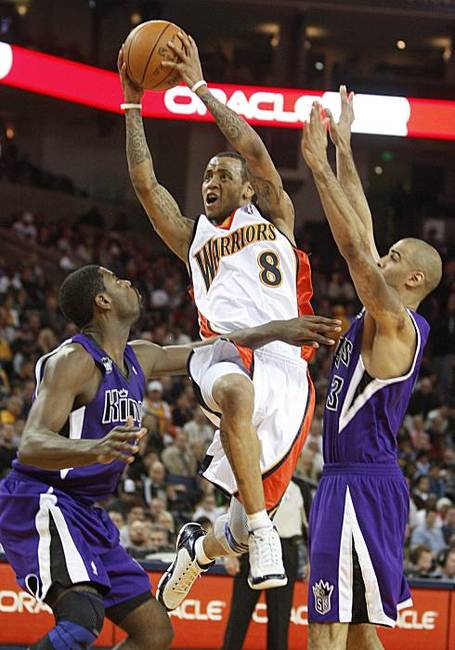 Special props to some Kings.  Sacratomato has a keeper in Tyreke Evans.  In future years, he'll be responsible for many wins.  Also impressive was the human incarnation of a bruise, Jon Brockman.  The Kings played great when he came into the game.  He pushed people around inside, grabbing boards, controlling space.  Special thanks to Westphal for sitting him after the opening minutes of the 3rd.  He was working and I have no idea why Westphal thought that he needed him to help keep the bench from flying up to the ceiling when the game was on the line.