No practice today, but the big news today was that Anthony Randolph did NOT have a fracture in his left ankle. Anyway, make the jump for whatever else interesting things I could dig up today, including a very insightful sounding Monta in an interview with Lowell Cohn.

- It has already been reported that Randolph doesn't have a fracture. The interesting tidbit in this article is that the Warriors are hoping for Cartier Martin to show up at practice on Sunday.
Rusty Simmons: No fracture, but no timeline for a return

My note: To me, that could mean that Martin could play on Monday against the Cavaliers. Remember when Chris Hunter showed up, his first job was to guard Greg Oden? Let's throw Cartier Martin on LeBron James!

- After Friday's morning shootaround, Lowell Cohn sat down with Monta Ellis and talked about several things. Monta Ellis speaks about his improved play, his relationship with Warriors' management, his son, NBA players and guns

- The Warriors look forward to playing 18 of their next 24 games at home with the support of the home crowd.

- Before Friday's game started, Antawn Jamison addressed the crowd and apologized to the fans. That must not have been very easy to do. You can hear him get a little emotional when he talks. I hope we never have to go through anything like this. The Wizards beat the Magic by 7, outscoring them by 13 in the 4th qtr.

- I think this is the picture Jamison's talking about: 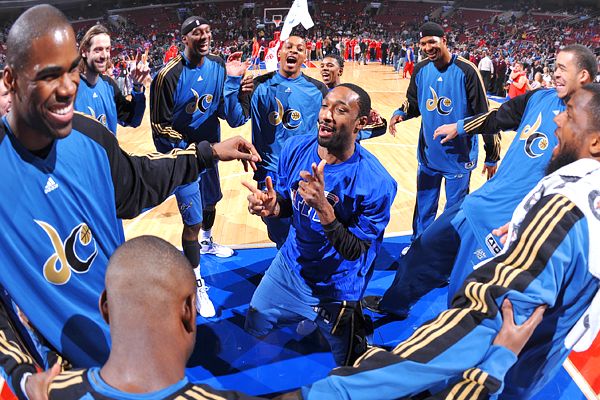