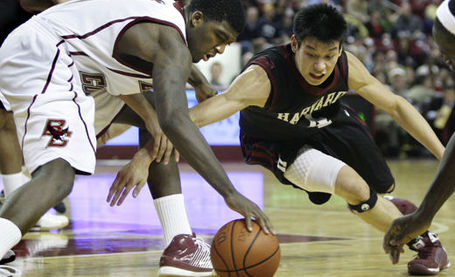 A lot of people are excited about Jeremy Lin, partly for the right reasons, partly for the wrong. Like most Warriors fans, I am intrigued. There are good reasons to be so. Lin is not too short for a point guard, which is a good start and has pretty good athleticism, as he displayed in summer league:

The moment that really skyrocketed Lin’s stock was when execs watched him go toe-to-toe with the top overall pick John Wall. Lin made Wall look silly on both ends of the court and proved that the main knock on him, athleticism, was not one that needed to be worried about.

To go "toe-to-toe" with John Wall and not being phased by that kind of pressure speaks well of him. As a noted University of Connecticut coach pointed out...

"I've seen a lot of teams come through here, and [Jeremy Lin] could play for any of them. He's got great, great composure on the court. He knows how to play" (Hall of Fame Coach, Jim Calhoun).

We didn't see the Jeremy Lin we wanted to see against the Kings the other night, though, did we? It looked like a rookie out there who had never played professional basketball in his life. That is no surprise. We shouldn't let that short few minutes define him as a player, of course. He may well turn out to be a pretty good player and possibly even start one day, seeing as composure is so key for NBA point guards....

The guy seems to have some potential, and perhaps we got a steal, maybe the equivalent of a mid-first round pick. Let's appreciate Jeremy Lin for the basketball player he is, by waiting and seeing what he can do.

According to your amazing NBA scouting ability, what is Jeremy Lin's ceiling?