My name is Sam and some of you might know me from my posting over at Niners Nation. I also am a beat writer that covers the 49ers at Examiner.com.

Last night I had a press pass for Friday's game against the Clippers. With my press pass, I was able to go into the locker room after the game and talk with Jeremy Lin about his thoughts on his NBA debut and Asian Heritage Night. Since I only cover the 49ers, I have no outlet to post my story about this, so I decided that maybe this would be pretty cool.

So here's my story on Lin with quotes from the locker room after the game. Thanks for reading. 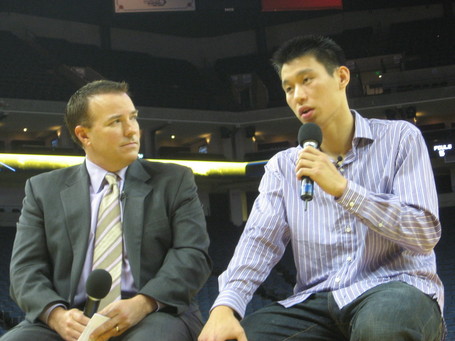 (I had a front row seat on the court for the Q&A, which was pretty neat too. Took this shot)

OAKLAND, Calif. -- Jeremy Lin had nothing but thanks after making his NBA debut on Friday night. Even though the rookie from Palo Alto only saw action for the last two-and-a-half minutes of the game, the crowd of 17,408 exploded with cheers at every instant the guard touched the ball.

The Golden State Warriors beat the Los Angeles Clippers 109-91 as Lin dribbled out the final seconds off the game clock.

Lin was the main attraction for more than 2,000 fans that bought tickets for Asian Heritage Night. Portions of the tickets will go to benefit local Asian community organizations, including San Francisco Hep B Free and the AsianWeek Foundation. Also, fans received an exclusive T-Shirt and access to Lin’s Q&A after the game.

The rookie didn’t take any shot attempts but was credited with a steal on a jumpball that he initiated on the Clippers’ half of the court. It was an experience that Lin himself didn’t remember much, saying that the entire experience "was just a blur".

"I just thought to myself, ‘You’re here now; you’re in an NBA game,’" Lin recalled. "That was my dream my whole life. That’s pretty amazing."

The crowd started to chant for Lin midway through the fourth quarter and only when it was clear that the Warriors had the game in the bag, did head coach Keith Smart decide to make the move to sub in Lin.

"He’s been practicing very well," Smart said during the postgame press conference. Smart was impressed with the way Lin handled himself on the floor but still recognized that it was a learning process for the rookie out of Harvard.

"He actually called a few plays to get the team settled. We’re slowly feeding him a baby spoon of NBA basketball."

Despite the limited playing time Lin received in the game, the crowd rose to its feet throughout the last minutes of the fourth quarter.

"That’s pretty mind-blowing in my opinion," Lin said of the crowd and their support for him during the game. "I’m just a rookie trying to prove myself and work my way up. Just for everyone to support me like this so early on is important to me."

The focus was something that Lin said that he didn’t think too much of early on. With so much preparation going into the game itself, the guard said that he just treated like any other game. But after hearing the crowd react, he said he couldn’t contain his excitement to get back onto the floor for the Q&A.

"I’m so proud to be Asian-American and to be able to be here," said Lin. "I wouldn’t want to be any other ethnicity or anything.

"This is a big night for the whole community, not just for me. I just want to go out there and celebrate with everyone."

After the game, my friends and I went to the Denny's near the arena and we saw Lin and his family eating dinner there too. He was nice enough to take a picture with us. 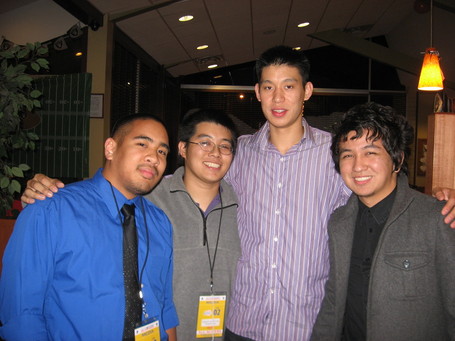 That's me in the middle. (Photo taken by Papa Lin)