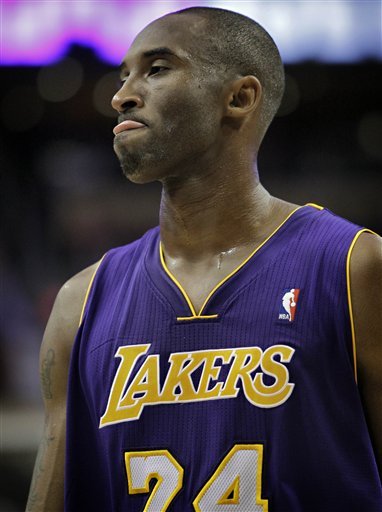 It's an early season battle for first place in the Pacific Division,
and with Steph Curry sitting this one out it looks like Kobe can taste a victory.

Up until the third quarter of Friday night's game against the Clippers it had been all treats and no tricks for the Warriors this season, when Stephen Curry rolled his ankle (again!?!?) and had to leave the game and head to the locker room. In what is probably a wise move the Warriors decided to leave Steph at home for this one and try to rest up his ankle for Wednesday's game against the Griz. That leaves the rest of the Warriors with a pretty tough test tonight. As if it wasn't hard enough to win a game on the home court of the NBA Champs, the Warriors will try to do that tonight without their starting point guard, relying on some questionable depth in the backcourt. The good news is that Monta Ellis has been doing a great job so far this season distributing the ball, and with Wright, Lee, and Beidrins we might be fielding the best overall passing starting five in the league this year. The bad news of course is that we are playing the Lakers, but let's keep riding the wave of positivity and look at the bright side here. If the Warriors can go into LA and steal a victory tonight you've got to start wondering if some of the stat-heads that were predicting enough wins to snag a playoff spot might have been on to something. Jump for Tricks and Treats!

Happy Halloween!! Have fun, and be safe. Go Warriors! Go Giants! And check out The Walking Dead on AMC tonight!!

What's your favorite candy on Halloween?