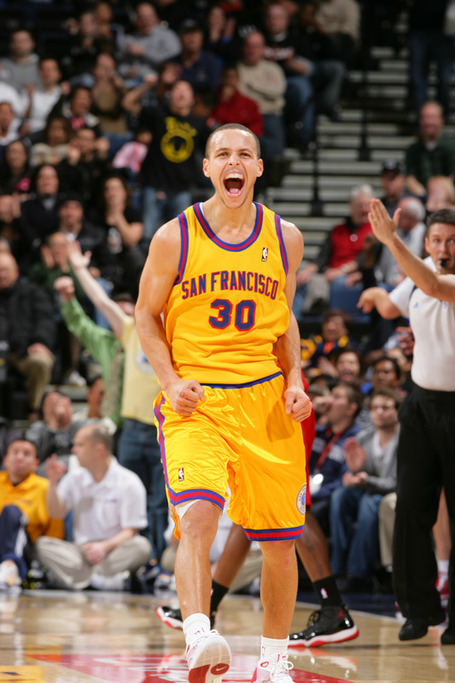 Steph! I'm excited for this season too!

Even though preseason games don't matter, I feel like this one does. New era, new logo, new owner, new players, new coach, new optimism, new (baby) face of the franchise. First impressions of the new squad in a new season. It'll be fun and exciting. Kind of like on Christmas opening up that brand new toy you wanted for the last 6 months and finally, finally getting to play with it. That's what this feels like. Except it's been 16 years and Cohan hasn't left any presents under the tree except for once, but maybe Nellie and Baron left that present. Yea, it feels good to kick off this new season with all the newness especially now that Milipitas-like stench of the former owner has almost been completely fumigated from the arena and the Bay Area.

I'll be honest, I've had baseball on the mind for the past few months. The Warriors have been an afterthought. And after last night's historic, mind-blowing, 14 strikeout, domination by Tim Lincecum, I don't think that will change for me. Bay Area sports teams don't often make the playoffs, so I'm going to soak it up as much as I can.

This is a Warriors website, why does this matter?

Tomorrow is the first preseason game of the year for the Warriors and for the first time in awhile, I feel optimistic and excited. I would be going to this game thanks to the free preseason tickets deal of GSOM Night 9. I had planned to go. I was all set to wear my Warriors gear, deal with 880 traffic, and watch the new look squad. But then the Giants went and clinched the NL West, and well, they play game 2 of the NLDS against the Braves at 6:30 PM. Watching the Warriors first preseason game or watching the Giants in the playoffs? Easy answer but I am disappointed I can only see 1. Sorry Warriors, no matter how excited I am about this year's squad, there's absolutely no way I'm going to miss the playoff game. Even if the Warriors signed LeBron-Wade-Bosh, I'd still be at home watching the MLB playoffs. Had the Giants not made it, I would be at this game soaking it all in and watching the new look squad.

For those of you who are going to the game or listening on the radio, let us know how that new squad looks.

3 Things I'm Excited About For Tonight's Game
1) Stephen Curry
What a monster 2nd half Curry had. In my optimistic view of things, he's going to get better. Heck, if he plays like he did in that 2nd half of the year for the rest of his career, he'll have a damn good career. But he's going to get better than that. And he better be a Warriors for a long, long time. Who's more important Buster Posey or Stephen Curry? See, baseball on the brain.

2) David Lee
A guy who can score AND rebound? Whoa. He still doesn't play defense, which would have made him the holy trinity. 2 out of 3 ain't bad especially when we swapped him for some bench guys. Yea that's right, Anthony Randolph = bench player. It's easy to be optimistic about your own players and easy to be pessimistic about everyone else.

3) Blake Griffin
Non-Warriors excitement but still excited to see how this guy does. He looked so promising coming out of college and he just has the unfortunate luck of playing for the Clips (playing for the Warriors is no more or less cursed). His game against the Kings yesterday? 18 points (7-7 FG) and 13 boards.

My favorite newness is...