Okay, okay, I know it was only one preseason game. I know that it doesn't count. I know that for much of the game we were playing against the reserves of a losing NBA team. Having said that, lets go ahead and let some of the things that happened last night be as important as we wish they were. We will ignore sample size, lose all perspective, and say goodbye to reasonable analysis. In other words let's enjoy this, not as a meaningless game, but as a celebration of new beginnings and second chances. Let's Jump!

So I arrived at the game late in the first quarter. I came with three buddies that aren't really Warriors fans, so making the opening tip was secondary to grabbing some cheap eats and loading up on refreshments before being held hostage by the Oracle concession prices. As we rolled in everyone was impressed by the sharp new court and unis. This just didn't look like any Warriors team we'd seen before, and that is a good thing. I still have a few nit-picky complaints about the new logo and jerseys (font... ugh) but overall it was good to see the new look Warriors with a, uh... new look.

The Redemption of Monta Ellis

To me Monta has seemed like a changed man. He showed up early to training camp saying all the right things, and showing the kind of leadership and humility that even the most optimistic Monta fan couldn't have expected. He seems to have replaced delusions of grandeur ("I’m going to say LeBron James [third], he can do it all, pass, score, defend, block shots. No. 2, I would have to say, me. I can do a whole lot of things: defend, score, make passes, do whatever I need to do.") with a more realistic self image and a better understanding of what he needs to do to be successful ("I see now that I have to play the two (shooting guard). I have to play the bigger guards, and I’m cool with that."). 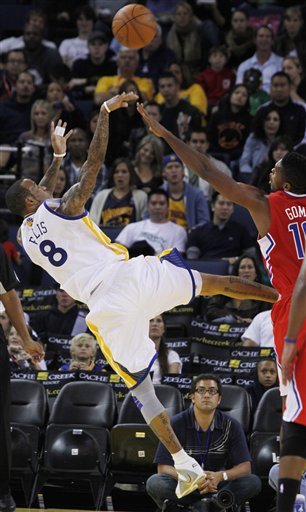 If you squint it kinda looks like Kobe playing on a Sunday a couple years back, Right?

Now he finally had the chance to show us on the court, and while I'll be quick to admit that my analysis from the seats at Oracle can be somewhat lacking, he definitely impressed me. His numbers were great with 22pts 4ast 2stl in 28 minutes, going 8-11 from the field including (GASP!!) 4-4 from beyond the arc. But it wasn't just the gaudy efficiency that we've all been wishing for; it was the poise and expanded skill-set he showed. Sure, It could have just been a hot shooting night, a clustering of data points, or forgiving rims, but Monta was railing the three-ball. He only took four, but they included some tough ones, and with the confidence he showed in his shot it definitely looked like he had spent the summer putting in work. Two of his threes in particular impressed me. Both times he was coming of a high pick with the ball in his hands. This is a situation that we say again and again back when Monta was Monta. He would use that high pick to get a  bit of seperation and then out of respect for his speed and ability to penetrate, the defense would suck in leaving him the wide open 18 footer which he would drill repeatedly. Well, now it would seem he can make that same play from beyond the three point line. A few years back Monta looked like he lacked the strength to consistently get the ball to the rim from anywhere outside of 20ft, but last night he was draining long threes off the dribble while moving laterally, and they had plenty of arc on them.

Overall he played within himself, picked his spots to be aggressive, didn't force his offense, and seemed to but in a good effort on defense against Gordon and Foye. He basically fit the description of what every Warrior fan has been saying we would need out of Monta this year. Well done sir. Keep it coming.

I've never been all that good at watching a guy play college ball and projecting how he might do in the pros. Admittedly I'm not a huge fan of the college game, so the differences in style, rules, size, and  athleticism are just too much for me to navigate with any confidence. Now it didn't take a professional scout to see that Blake Griffin was extremely talented and had the tools you need to make an impact in the league, but I was still very much in a wait-and-see mindset about Griffin heading into the game last night. Well, it didn't take more than a couple minutes of watching him out there to see that he belongs in this league. Not only that he belongs, but that he is here to make an impact. Looking at the competition, I have to think that he is head and shoulders above any of the other guys in the hunt for rookie of the year. He just seems to ready to come out and contribute in a big way night in and night out. Last night he was rebounding with authority, scoring with power and grace, and putting consistent pressure on the Warriors big-men who (not surprisingly) didn't have any way of slowing him down. 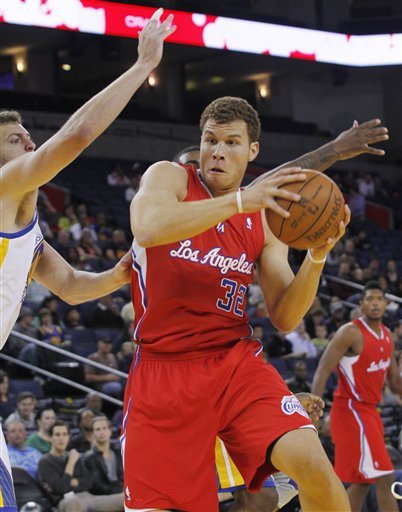 This teams interior defense was definitely a concern coming into this game, and I'm still just as worried. On the bright side, the perimeter D looked much improved.

One R, Two L's. Dorell Wright is About to Be Known

Many of the well respected posters here came out quickly to praise the signing of Dorell Wright this offseason. Based mostly on his rate stats and frame, Dorell looked like the kind of player that is primed for a break-out season. There were still some questions about him as a player, but after watching him last night I can't seem to think of what they are... 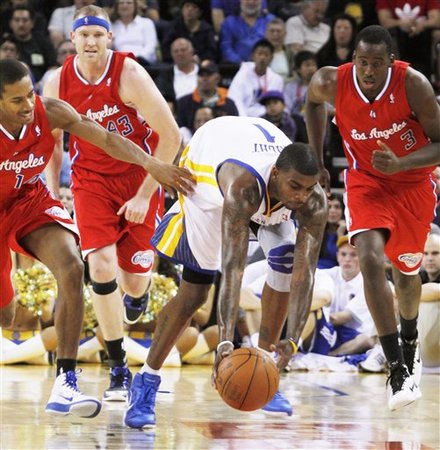 Dorell using his length to get to a loose ball and start the break.

16pts 6reb 4ast 1stl 1blk 0tov in 27 minutes. Not to mention what looked to me to be some of the better perimeter defense I've seen from a wing in a Warriors jersey since... uh, since... well lets just say he looked better than anyone we've seen the last couple years. He looks to be just the kind of all-around player that should fit right in to this starting line-up. The team shouldn't need to run any plays for him to be effective. Just run him out there and watch him defend, rebound, move the ball, hit the three when open, and get out on the break. Yes please. I could kiss Larry Riley right now. With all the hype of this years free agency Dorell Wright could be the best value signing of the summer.

On a night where seemingly everything went right for the Warriors, Jeremy Lin's late game appearance was easily the most fun part of the game. It was great to hear the crowd get behind the local kid so completely, yet not take the moment too seriously. It doesn't get much less meaningful than the fourth quarter of a 40 point blowout preseason game, but the moment Lin took the court there was somewhat of a tension and excitement that transcended the reality that there was so little at stake for these teams. Suddenly the drama all focused on the roster's 12th man having an opportunity to prove that not only does he belong in this league, but that he deserves to play. I'm not sure how much his 7pts 3reb 2ast 1stl did to impress Coach Smart, but in that moment in the stands it felt like a Disney movie. You could feel the entire arena pulling for the kid, and he should be proud of the way he played in his 10 minutes of action.

That was fun! Is the Giants game over? 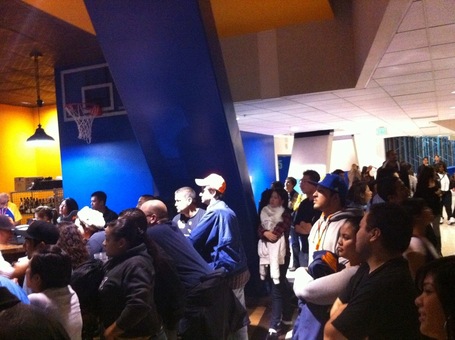 These people are about to be pretty bummed.

The night would have ended all swell and dandy if immediately after the game the score of the Giants game wasn't flashed up on the scoreboard. What!?!? They gave up the lead? We headed over to one of the bars in the upper level to see if they still had the game on, and we found that a bunch of other W's fans had the same idea. We got there just in time to watch a double play send the crowd into a chorus of groans. Then right around the time someone from the Oracle staff said they would be turning off the TVs it became unclear whether the huge crowd was loudly booing her or the home run that was putting the Braves ahead 5-4 in the top of the 11th right over her shoulder... Poor lady. It was never going to be a popular announcement, but that was really bad timing.