RECAP #8: Golden State Warriors 122, New York Knicks 117 - David Lee Walks Away With the Homecoming Crown... and Half of Wilson Chandler's Front Tooth Embedded in His Elbow

Share All sharing options for: RECAP #8: Golden State Warriors 122, New York Knicks 117 - David Lee Walks Away With the Homecoming Crown... and Half of Wilson Chandler's Front Tooth Embedded in His Elbow 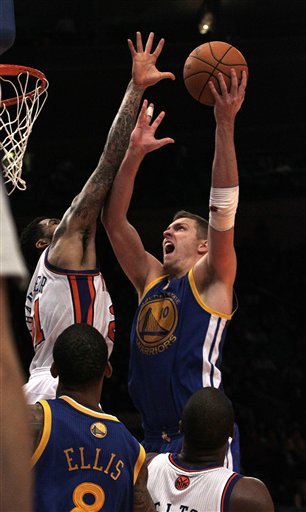 I'm not usually one to complain about the officiating in a game. I believe that, in general, the good breaks and the bad breaks will even themselves out over the course of the season, so I try not to let it bother me on the nights when the Warriors are getting the short end of the stick. Things may end up even by season's end, but before I get on with my recap I have to say that the game tonight must have been one of the worst officiated games I have ever seen. It was frustrating to the point where I was nearly strapping on my tinfoil hat and cross referencing tonight's officials with Tim Donaghy to see if there was some connection. Okay, I'm exaggerating here, of course I'd never question the purity of sport... Um, anyway... On to the Recap.

In tonight's preview I wrote that I expected David Lee to come out with a chip on his shoulder, and boy did he. In fact I think he was a little too amped early on leading to some careless mistakes. He was able to reign in his emotion and channel his motivation into a 28pts (on 17 FGAs) 10reb and 4stl night. He looked more aggressive on offense, and didn't hesitate when he found himself with an opportunity to score. He was very tough on the glass tonight too. Just ask Wilson Chandler who challenged Lee for a rebound in the paint and came away missing half of one of his front teeth. They stopped the game to get Chandler checked out, and bandage the gash on Lee's arm. After a minute or two searching the floor for the missing part of Wilson's tooth I thought to myself "Did anyone check David's Elbow?" Both players returned to the game, and despite grimacing in pain Lee continued to play some of his best basketball of the season. Late in the game Lee stepped up to the line for some very critical free throws with blood seeping through his heavily bandaged arm, looking troubled by the pain. He knocked down both shots. It was his very own Curt Shilling moment.

Speaking of playing through pain, if you would have asked most Warriors fans moments after Monta hit the deck awkwardly in Toronto, I don't think many would have expected to see Monta play tonight. Once the Doc cleared Monta, there seemed to be little question in his own mind whether or not he would play though. It was quite fitting considering the setting of MSG and all. He came out moving well and removed any memory of him squirming around on his back with some beautiful drives to the basket where he didn't shy away from contact at all. His toughness seemed to inspire his teammates, who stepped up so Monta wouldn't have to carry the team on his recently sprained back.

Since Curry came into the league he's been compared to many great Point Guards by some of the folks around here, and while I'm hesitant to play the player comparison game, tonight one struck me that was undeniable. Steve Nash. Now before you go after me, like I've gone after all of the other people who have brought up this comparison in the past, I want explain myself. It wasn't actually his passing that reminded me of Nash at all. Curry still has a long way to go before he is in Nash's league as a playmaker (he'll have to stop using that slow, telegraphed, underhand shovel pass, for one). It was actually his crafty drives to the basket and below-the-rim finishes. His ball handling has continued to improve since being drafted, and for the first time tonight he looked Nash-esque in his ability to keep his dribble alive while calmly weaving through defenders, and changing pace on his way to the basket. Then once he got in the paint it was impressive to see the multitude of ways he got off those quick lay-ins and floaters before the defense could react. Steph Curry looks like he's becoming a great finisher inside, with an abundance of skill making up for any lack of athleticism.

Learning on the Job

I've been hesitant to get on Coach Smart's case too much about some of his decisions, and trends that I find alarming so far in this young season. I'm still going to hold off a bit longer and let him enjoy his head coaching honeymoon on this 6-2 Warriors team. I will mention a couple of positive changes I saw tonight though. The early time for Brandan Wright and Jeremy Lin in the last couple games has been refreshing. It's nice to see him go to them early, but it's clear that he still doesn't really trust them. I personally think Wright's play so far this season should have solidified his position  as the first big off the bench. I don't see any reason to play Vlad in the second half of a game where Wright is fresh and available. Radmanovic (or Vlade Divac as Barnett took to calling him during the broadcast) was a foul machine out there tonight, sending Amar'e to the line repeatedly, and with 0reb, 0ast, 0blk, 0stl and 4 fouls in six critical minutes, he seemed to only have made his presence known to the referees. One thing I did like about tonight's rotations was that Smart seemed to recognize that tonight was a critical game to pick up on this road trip, and he didn't hesitate to play all of his starters except Andris over 40 minutes despite having another game tomorrow night in Chicago. It may make tomorrow night's game a little tougher, but we really needed to prioritize tonight's very winnable contest.

Another bright spot was seeing more Pick and Roll tonight. This has been discussed here pretty extensively, and many fans have been vocal about wanting to see Smart get away from the Motion offense, and run more Pick and Rolls. While it wasn't a drastic shift, tonight we did see more pick and rolls and a much better and more balanced offensive game in general.

Hey! The Warriors are 6-2, and they just won two road games in a row! Our team is now sitting in 5th place in the Western Conference! I have no clue where this team will end up, but they are looking like they should be a real threat to make the playoffs this season, which means 82 games of enjoyable basketball! Let's celebrate our great start! Speaking of things to celebrate, I get to hand out my first Warrior Wonder tonight... Drum roll please... 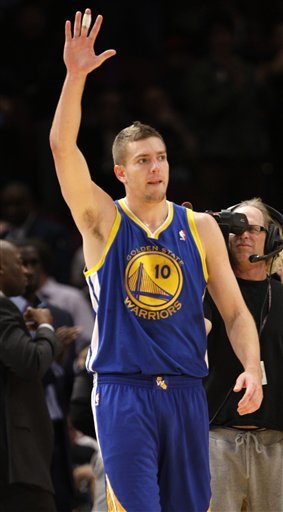 For all the reasons I listed above I think this great honor (am I laying it on too thick?) should go to David Lee. I won't waste too much time explaining why because according to tonight's poll in IQ's links post, most of you already agree with me anyway. G'night.