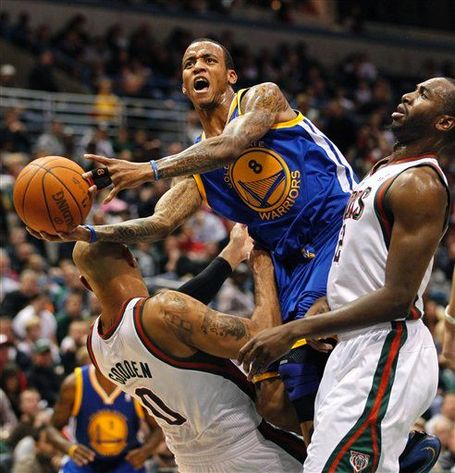 Tonight, this was considered a good shot

Tonight, the Warriors just didn't have their legs early on and had to fight for everything. They were down 15 to start the 4th and in a game this low scoring and with such poor shooting, that felt like a 30 point lead. But somehow, the Warriors scrapped back with Jeff Adrien, Monta Ellis, and Reggie Williams in the 4th. They cut it all the way down to 3 only to not secure a defensive rebound. The Bucks grabbed the rebound and scored to push the lead to 5. And that was all she wrote.

You might be thinking that those 4 numbers in the title are the winning lotto numbers for tonight, but no, they aren't. I promise they have some meaning.

34
The percent that the Warriors shot the ball from the field. Milwaukee shot 33.7%. Had the Warriors managed to shoot a decent percentage, they probably win this game. Credit the Milwaukee defense though. They challenge shots. They would rather hack you on the way to the hoop than give up an easy bucket. They get in good position to take charges - the Warriors had 6 pass and crash offensive fouls. They fight for everything, rebounds, buckets, gatorade, steals, possessions, etc. Nothing comes easy against the Bucks. See below:

When more than half of your shots go down 20.9% of the time, you most likely aren't going to get a W. 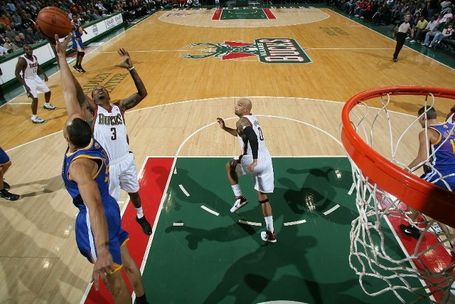 Brandon Jennings with the rebound over Dan Gadzuric

16
The number of rebounds the Bucks out-rebounded the Warriors by. The Bucks won the battle of the boards 58-42. Pretty significant difference. And you know why? One of the Warriors best rebounders was bitten by a damn New York vampire and now his elbow is infected.

I hope I hear that chant next Friday when the Knicks come to town. Every time Chandler touches the ball, the crowd should chant "BRUSH" "YOUR" "TEETH"! What kind of guy has his teeth puncture another guy and the other guy gets infected. What kind of modern medicine do we have going here? Tommy Abdenour better start doing his job. How many wins is this vampire bite going to cost the Warriors? I'm counting tonight as 1.

Okay, now that I have that out, the Bucks really bang the boards. Everybody is trying to get a rebound. Just check out the boxscore, it's ridiculous:
Drew Gooden (31 min) 10 rebounds
Luc Richard Mbah a Moute (39 min) 12 rebounds
Andrew Bogut (39 min) 17 rebounds
Brandon Jennings (42 min) 11 rebounds

50 rebounds from 4 of the starting 5. They out-rebounded the entire Warriors team by 8 rebounds.

10
The number of second chance points the Bucks had in the 4th quarter. If the Warriors somehow prevent just a few of those from happening, it may be a completely different outcome. Another reason the Wilson Chandler's tooth hurts this team. The Warriors had tired legs and not enough big men to grab rebounds when it really counted.

11
The number of free throws the Bucks out-shot the Warriors by. The Bucks shot 21 free throws and made 17 versus the Warriors paltry 10 free throws taken and only 6 made. The Warriors have been significantly out-free throwed many times this year. Not a good trend especially in a game like this where field goals are hard to come by. If they could figure out how to get to the line, they can take shots without a Bucks defender's hand in their face.

Monday night the Warriors come home to face the Pistons. A 2-3 road trip is what I expected but they were so close to actually being 4-1. Incredible really and to me, it's a positive sign. I'm still crossing my fingers that this team has enough to keep the fans interested past January.

On Monday, there will still be no David Lee, but hopefully they don't need him against that woeful team.

Honorable mention goes to Jeff Adrien for his great work down low. He's got some real beef and he threw his weight around tonight. His 19 minutes were crucial to the Warriors' comeback. He played tough D down low on Gooden who tried to muscle him around but just couldn't do it. Adrien managed to grab 8 boards, block 2 shots and put in a nice little hook shot to bring the Warriors within 3 with 1:31 to go.

But the Warrior Wonder goes to Monta Ellis. Without him tonight, the Warriors don't score more than 60 and this game is a blowout. His scoring kept the Warriors around just enough to make that late run. He was the only guy who could make a shot. Adrien doesn't get a chance to make an impact in the 4th if Monta doesn't have the game he does. So, Monta gets the Warrior Wonder for his 24 points on 9-16 shooting, 5 boards and 8 assists. The 7 turnovers hurt a lot, but in a game where nobody else on the team can score, I'll let him try to force things a bit more than usual. 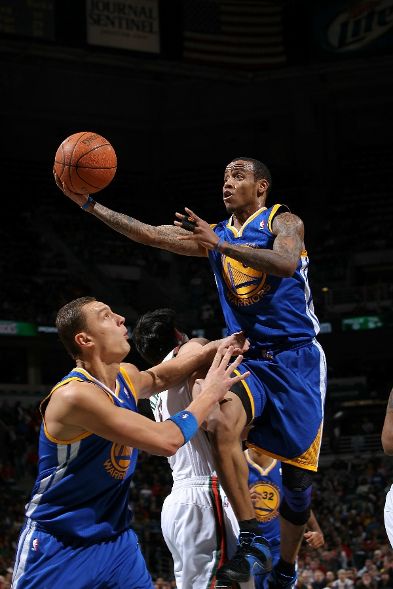