Monta Ellis keeps inching ever so closer to becoming a bonafide all-star. Superstar? Well, Coach Keith Smart said,"He's our superstar" after the game. More on this after the jump.

Perhaps the most telling stat of this game: last week when the Warriors beat the Knicks at Madison Square Garden, David Lee, who was still out with the infected elbow albeit in street clothes on the bench, tallied 28 points, 10 rebounds. Last night, the Warrior power forwards combined for a paltry, unacceptable 8 points, 5 rebounds.

But before we hit the jump, I think my fellow GSoM staff won't mind me sort of breaking convention and posting more than one leading pic or video prior to the jump. Monta deserves it. Here's the throw-down on Ronny Turiaf that vaulted it past Paul Pierce's "meh" dunk to the Number 1 play of the night on NBA.com. It's near the beginning at the 0:15 mark of the recap video, after the requisite advertisement...

Last night in the first half, Ellis kept the game from becoming a blowout, scoring 24 points on 11-for-16 from the field as the Warriors trailed by 13 midway through. Then the Warriors clawed their way back from down as many as 17, only to have the door slammed shut at the end by Raymond Felton's career night (35 points, 11 assists) and Danilo Gallinari's clutch treys.

Q1: Even Steven, Monta shows off a running hook!

The first frame was pretty even. Dorell Wright came out with the engines revving, with easy buckets swooping to the rim or via a fastbreak or two. But Amare Stoudemire was being Amare and hitting jumpers. Felton started to showing signs of the big night he would have. Even Andris Biedrins got into the action with a couple hooks. Perhaps foreshadowing what would come not too long from now, Stephen Curry missed a technical free throw shot from a defensive three-second violation by the Knicks, then had a putshot in the lane that fell short, somewhat uncomfortably short. In any case, it was 31-31 at the end of one.

By this time it was clear that Monta had come to play. Well, he's basically been doing that all season long, so that was really not a surprise. Using a high screen at the straight-away top, he faked going right on Felton, who then got caught in the screen, and crossed over to find the key vacated.

At about two or three feet beyond the hashmark, Monta took flight. Turiaf was stuck underneath and was the only defender within miles of Monta, but it was too late. Way, way too late. Monta flew in from the sky with a throwdown that set Twitter ablaze.

The replay showed that Turiaf had actually got back into the play as his hand met Monta's wrist, but the downward motion was nearly complete by then. The other former Warriors (Kelenna Azubuike and Anthony Randolph, who did not play) will have plenty to talk about on the flight home with Ronny.

However, just as soon as that play was supposed to shift momentum to the Warriors with the crowd abuzz, Reggie Williams killed it. He fouled Toney Douglas shooting a three-pointer, and Douglas went to the line and buried two of the three free throws. But by this time, there had been about a minute-and-a-half of dead ball since Monta's dunk.

The Warriors started settling for jumpers and a sequence of three offensive rebounds ending with a Wilson Chandler and-one putback open a gash in the Warriors deficit of 9 points. A few careless turnovers and then an Amare block on Vladimir Radmanovic's putback on a miss from Curry ended up with the ball settling at the top of the shotclock platform above the backboard. Incidentally, it was a VladRad's 30th birthday last night, so I'm sure that must have had something to do with it.

A dunk by Amare, a couple of eye-popping strong moves and shots made by Felton, and the Warriors found themselves down at the half by 13. By the way, Stanford product Landry Fields had a solid 9 points and 8 rebounds at the break. I asked Matt Steinmetz via Twitter if there was any crowd reception to Fields and Steinmetz said no. Rusty Simmons tweeted that with Monta 11-for-16 at the half, the rest of the Warriors were shooting a combined 15-for-34. Felton had 17 points, 4 assists. 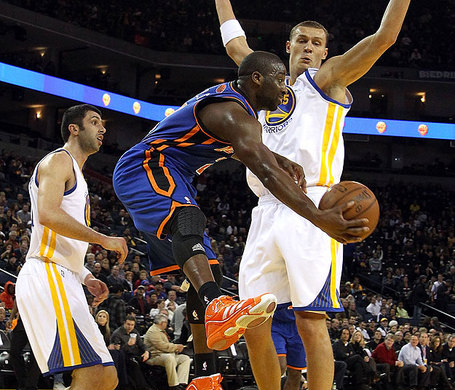 While Monta kept pouring it in with a variety of stepback J's, the Knicks' Felton proved that his first half was no fluke. The Knicks were moving the ball around nicely on offense and rebounding the ball solidly, outboarding the Warriors 34-20.

The Knicks were also shooting and making way more free throws at this point: 22 to 7. All of this despite the Warriors shooting 51.6% from the floor.

Monta would only score 4 points in the 4th quarter, but this is when the other Warriors finally decided to make a run. Curry started to make things happen and draw contact on fakes that resulted in free throws. A missed bunny by Turiaf after a nice pass from Fields led to a Reggie Williams trey. Yet another Williams trey shortly thereafter trimmed the Knicks lead to 104-100 with under 7 minutes remaining.

At this point, with Jeff Adrien somewhat ineffective, Smart had Wright guarding Amare. Wright actually did an okay job.

Williams would make another trey amidst aggressive drives to the hoop. Approaching two minutes, Williams took it strong left-handed and at first it appeared he would go for the slam over the defender, as he had done previously in the quarter that resulted in two free throws, but he laid it in high off the backboard to cut the Knicks lead to two. Chandler would then travel on the ensuing sequence as Williams did a good job closing out on him. Williams would end the game with 13 points in the 4th quarter alone.

Smart called a timeout. Perhaps Monta was a little winded, but out of the timeout Monta took a shot that rimmed off over the backboard. No one was underneath rebounding anyways. Gallinari answered with a trey. Then Felton got into the paint again and made another tough banker.

Down 6 with 42.7 left, Williams stopped his dribble at the elbow free throw line extended. Monta cut to the hole, but Williams's pass went behind him, and a two-possession game became a three-possession game. The Warriors could do nothing else but foul and send the Knicks to the line. Felton drilled the last two free throws and a meaningless trey by Williams left the final score at 125-119, Knicks.

While it was clear that the Warriors missed David Lee, their comeback proved that there's heart somewhere in this squad. Are they able to pull it out earlier to match Monta's intensity before digging too big of a hole? Smart said post-game that he was looking for another player to step up. I think he was talking about Curry. Steph needs to assert himself earlier, not when the Warriors are desperate for him to spark a comeback. The younger players need to put four quarters together.

Felton lives up to his uni number

Last week I tweeted that it was sacrilege for Felton to wear the Knicks #2 jersey (bow down to Grandmama, aka Larry Johnson). But after this performance, I'll have to take that back. Felton played like a seasoned veteran last night. He took Curry to school, and even Monta at times.

There's one thing about the Warriors guards that may be a chronic issue. They just don't like to get physical. And Felton took advantage of that last night, bullying his way into the lane, almost at will. Just because you're not as meaty, like Curry or Monta, doesn't mean squat. It's an attitude you have to have. Just ask Reggie Miller or Gary Payton, who are no heavier than Curry or Monta. On defense, the Warrior backcourt needs take it a little bit more personal.

Clearly, last night's Warrior Wonder went to Monta. He showed off some pretty superstar-ish moves. Not just the "superman" dunk on Turiaf, but also the one-dribble-in-then-stepback-J on Gallinari or other bigger defenders, who were just trying to contain Monta.

Most of all, his heart, determination, and hustle. He was doing it all both ends of the floor. Sure, he wasn't contributing a tremendous amount when the Warriors made their comeback, but by then I think he was fatigued.

If he has a big game on Sunday against Kobe Bryant, you can rest assured that the serious all-star considerations will be in full swing for Monta.

Lately there's been a lot of talk on Twitter as to whether or not the Warriors would trade Monta for a "superstar", such as Carmelo Anthony. Marcus Thompson ended his tweet night arguing that it would be a lot easier to replace someone at the 2-guard position, while at the same time, superstars at the 3, 4, or 5, such as Melo, are hard to find.

There's talk that Monta's stock is high right now, so why not sell high?

While I think Monta has definitely stepped it up a notch offensively, what may make him more of a keeper is his new-found devotion to defense. It's quite clear that he's one of the fastest players in the NBA and that he's darting across your television screen getting steals left and right, but one of the most revealing traits is his ability to jump the high pick and roll, as if he had eyes behind his back. Still, the one-on-one play inside the three-point line could be more physical.

Monta's game on both ends of the floor is on the up-and-up, so I think it may be hard for owner Joe Lacob to part with him anytime soon, for fear of alienating the fans and the fact that Lacob may still be "assessing" Monta's trajectory with the Warriors. Also, Lacob speaks highly of rebounding, and Lou Amundson and Ekpe Udoh have yet to take the floor. The Warriors have a new roster, so it may very well take a good chunk of the season to assess.

Not to mention, Monta is second in the league in scoring right now, just a tad below Kevin Durant and a tad atop Kobe. Even though it's early, that's still pretty incredible.

Nevertheless, the discussion on whether or not Melo is worth a trade for Monta is still up for debate and probably worth a blogpost in and of itself.