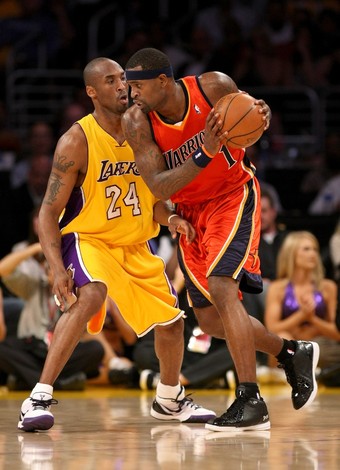 I wonder if Kobe misses the original young fella.

Not only is it football Sunday in the Yay Area (see Niners Nation and Silver and Black Pride), but on the hardwood it's the Bay vs LA. It doesn't get any better than this! (Check back with me around 930pm to see if I'm still saying that.)

Over at our brother site LA Lakers blog Silver Screen and Roll these words were said in their preview for tonight's festivity:

Though they're undoubtedly improved over last year's disaster, the Warriors aren't as good as their record and aren't a team that's going to give the Lakers trouble at Staples, provided the champs don't completely mail it in.

It pains me to say it, but they're probably right.

JUMP for the matchups and predictions!

Stephen Curry vs Derek Fisher. We're not even going there.

Player A = Kobe Bryant, Player B = Monta Ellis. And no I'm not crazy. Kobe is better than Monta especially defesively when he want to, but we're talking about tonight. Tonight I think Monta will give more.

I love what Dorell Wright is giving the Warriors thus far this season. 15-5-3 with over 40% shooting from downtown plus a pick and a swat nightly are fantastic contributions from GM Larry Riley's offseason find. I love Ron Artest (good ol' Ron-Ron), but there's nothing too impressive about his stats this season. I haven't watched enough Laker games this season to tell if his contributions of the defensive side of the ball are making up for that, so I could be wrong here. Still I feel confident saying...

This matchup is a lot closer if it's David Lee vs Lamar Odom. Sadly it's not that matchup with Lee's infected elbow. Even sadder is that the matchup is former Laker Vladimir Radmanovic vs Odom. Maybe it's funny for the Lakers?

Sadly this isn't even close. I remember the days when then Memphis Grizzlie Pau Gasol was on the trading block and some delusional fans weren't willing to part with Andris Biedrins in a trade for him.

Wouldn't Steve Blake, Matt Barnes, and Shannon Brown look good in Dubs jerseys? They'd make an excellent bench for the Dubs. Arguably the Warriors biggest weakness right now is their bench. It sill puzzles me why the team picked up Brandan Wright's 4th year option a year ago right after it was announced he would be out of the season.

Who would you rather have on your hoops squad?