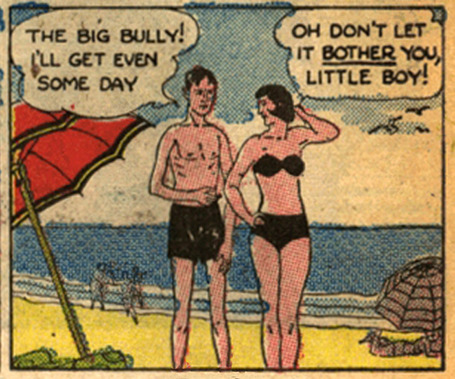 Not much you can say about this one, beyond "[snivel snivel] the big bully, I'll get even some day!" When you leave Staples Center with Jeremy Lin and Jeff Adrien having notched your two most impressive performances, you know generous amounts of sand have been kicked in your faces. I don't think anyone in Warriors Nation expected to win this one, but it's still no fun to be toyed with like the skinniest dude on the beach. Even without David Lee, one would like to think that the Warriors, as an aspiring low playoff seed, would be capable of making the NBA champs work for a victory. Tonight, I'm not even sure anyone on the Lakers broke a sweat. I'd call it a scrimmage for them, but players work during scrimmages, right? This was a walk on the beach. Heck, not even a walk. This was a siesta on the beach. This was the Corona ad, where the Lakers were the dude lounging in the beach chair staring at his own feet and the Warriors were ... what? The beer? The lime? I mean, beer is fizzy and lime is tart, neither of which remotely describes the Warriors' performance tonight. Nay, the Warriors tonight were more like the gentle, balmy sea breeze.

Some more thoughts on the Bullies and Little Boys after the jump.

Man, much as it pains me as a Warriors and Celtics fan to heap praise on these guys, I have to give props: the champs right now are a well-oiled Lamborghini rolling down the 405. I thought Father Time might catch up with them a bit this year — and he still could — but for now the bloom is still very much on the rose. Tonight it was all working: they shared the ball beautifully, scored efficiently, crashed the boards, and played suffocating D, both on the perimeter and at the rim. After Monta tied the game at 8-8 with 8:15 left in the first quarter, it took them about 3 minutes of lightly revving the engine — a few defensive stops, a couple of Gasol bunnies, a couple of lovely Gasol feeds to Kobe and Artest, a Fisher layup and a Kobe dunk —to open up a 20-10 lead. At that point it was all over but for the sniveling.

All the cogs in the machine were clicking tonight. Kobe made up for a meh shooting night by crashing the glass (6 boards in 27 minutes), setting up his teammates (5 dimes), and not forcing the action (0 turnovers). Artest led the defensive suffocation, repeatedly getting in Monta's and Dorell's grills and kitchens and making it nearly impossible for them to cook. Odom was the ultimate Swiss army knife, on both ends: 15 efficient points, 10 boards, 3 dimes, 2 blocks. Fisher didn't do much, as always, but he stuck a couple of jumpers, spread the D, and made very few mistakes. Blake and Barnes, the new linchpins of a revamped bench, are looking like the best pair of reserves they've had in ages — an especially irritating development given that two of the Warriors' biggest needs right now (beyond clearing out the DL) are cool, steady backup veteran PG and a do-it-all wing who can stick the open 3. As the drunken flappers at Gatsby's party sang, "the rich get richer, and the poor get ... children."

Special praise, of course, needs to be heaped upon the shaggy head of Pau Gasol, who right now may be the most magical Barcelonan since Joan Miró and Antoni Gaudí were doing their thing 100 years ago. It's easy enough to get hyperbolic about him on a night where he drops 28 points on 10-10 fg, 8-8 ft, with 9 boards, 5 lovely dimes, 4 swats, 1 turnover, and 0 fouls. But this isn't purely reactionary: Pau Gasol may well be the best player in the NBA now, or at worst in a group with LeBron, Howard and Paul and no one else. And where the other dudes in that group have a wart and there (Paul's lack of length, Howard's lack of post moves, LeBron's lack of character) there are simply no flaws in Gasol game. He shoots like a guard, has a more lovely array of post moves than Kevin McHale, is the best passing big in the league, and oh-by-the-way is his team's defensive anchor. He's clearly the best player on the two-time defending champs; and — with all due respect to the Kobester — he's been that from the day he arrived in LA.

It's all so good right now for the champs you kinda forget they're playing without Andrew Bynum, who's probably a Top 5 NBA center when healthy. Oy.

Lots of blame to spread around tonight. Curry was tentative and cold to start the game, as has been his annoying wont of late, and tonight Monta's A game wasn't there to fill the void. Indeed, before Monta fell on his hip at the start of the 3rd quarter and left the game for good, he had showed a couple of flashes of last year's "bad Monta": putting his head down and forcing the action, failing to get his teammates involved (though he did make one nice dish to Biedrins), turning the ball over. 1R2L Wright made one poor decision after another. Biedrins was a non-factor, doing little to slow the Gasol Express. Reggie "Potatohead" Williams followed up his first really impressive shooting of the night of the season with a 1-for-10. And of course ... Bad Vlad Radmanovic was as exquisitely terrible as ever. Every minute he plays I think I get another grey hair.

Coach Smart also deserves his share of heat, both for the lack of energy with which the players started the game, and the lack of a game plan that stood even a remote chance of defeating Goliath. With the Warriors depleted frontcourt, the Lakers' approach should have been obvious: force the ball inside on offense, crowd Ellis and Curry on defense. If there was a ever a game for the breakneck pace of Nellieball, this was it. Instead they started slow-as-Molasses Radmanovic, mostly walked the ball upcourt, moved the ball glacially, and at one point found themselves down 22-2 in the fast-break point column. Spry Young-Legged Warriors 2, Creaky Old Lakers 22. Ugh. Though I'm still basically thrilled to have Nellie and his shenanigans out of my life, tonight was a night where I have to think the ol' silver fox would have come up with a gameplan with a bit more flair and panache and élan than the tattered white flag of a scheme we dragged out last night.

As mentioned above, the only real positive on the floor was the "Electric Light Orchestra" bench combo of Jeff / Lin. I think Lin still lacks the handles and court vision of a true PG, and his outside shot remains (speaking kindly) a work in progress, but he showed more energy and spunk than anyone else on the team tonight. He took it to the rim, was a pest on D, and crashed the boards. Adrien, meanwhile, did his usual thing: set up camp under the rim, pushed people around, grabbed 10 boards in 26 minutes. The return of Lee and Amundson will likely banish him to the end of the bench, but till that fine day arrives, he should really be seeing more burn than he does. And Radmanovic, needless to say, should be seeing less.

One other positive, looking at the bigger picture: even at full strength, we're unlikely to beat the Lakers at Staples. Better to lose a game like this than a game against a cruddy team that we should normally win with the presence of Lee. Both of our away games against the Big Purple & Gold Machine are now crossed off the schedule. The Ws need to shake it off quickly, come out with vim and vigor tonight against Denver (last night's extended garbage time should help in that respect), and — channeling their inner Charles Atlas — get even some day. January 12th, 2011 at the Oracle, the sand gets kicked back. Book it.