Share All sharing options for: Recap #14: Denver Nuggets 106, Golden State Warriors 89 - Too Many 3's and Too Much Carmelo 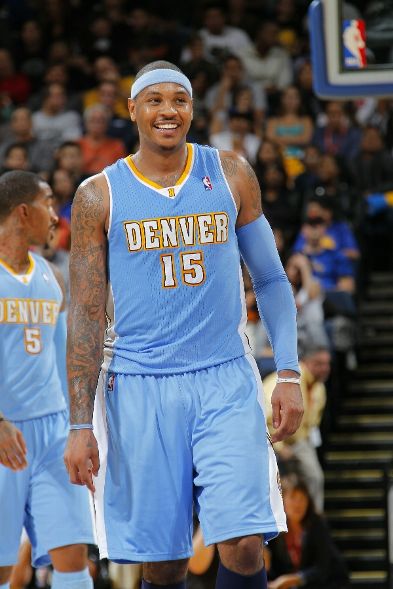 Lots of free throws, lots of points, lots of smiling

The Warriors offense sucked. They had no life tonight with the 3rd game in 4 nights. Maybe if they had hit some more shots early they get energized and don't fall apart at the end. Tired legs usually settle for jumpers. Tonight the Warriors took a lot of 3's. Their offense became drive and one pass to the man standing at the 3 point line or swing the ball around and shoot the open 3. Somebody go for a higher percentage shot. Get to the line. Do something other than launch 3's. They shot 26 of them and made 6, good for 23%. Compare that to the Nuggets 12-21 from 3 (8 of 9 at one point), good for 57%.

This game was actually close for most of the game. Both teams shot under 40% for the first half. The Warriors kept shooting poorly while the Nuggets found their stroke. Even with the poor shooting and Nuggets shooting better, with 5:47 to go, the Warriors were down just 5 with the ball. Then Monta misses a 3 and then the Nuggets go on a 9-1 run to go up 92-79 and put the game away.

Overall, the Warriors shot just 40% from the field. You're not going to win many games like that. The Nuggets finished with 47% from the field, an 11 made free throw advantage, and a huge advantage from 3. 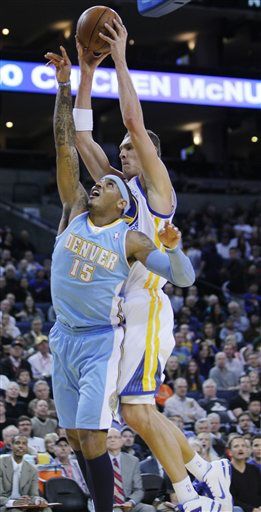 3 fouls in the first quarter and done for the first half, leaving the team without it's best big man. Does Andris understand that he is the Warriors most important big man and needs to stay in the game? Andris was having a very good quarter hustling for rebounds, fighting for and getting good position on offense and defense, and giving the team some second chance opportunities. When he came out in the 2nd half, he seemed to play more tentative as if afraid to pick up a foul. Well, he's got to learn how to play aggressive and contribute while also giving the Warriors hustle plays.

Luckily, Dan Gadzuric had his best game of the year and gave the team 32 quality minutes. With Biedrins sitting on the bench, Gadzuric gave the team lots energy on defense and the boards by just working his butt off down there. He finished with 11 boards and a couple blocks.

Guess who each player is. I know, it's hard and the answer might shock you.

Player A is Carmelo Anthony. Player B is Dorell Wright. Crazy how similar their numbers were tonight.

This was a test for DWright to see how he could match up with Carmelo. They brought him in to be a solid defender and we've come to count on his scoring. Tonight he was neither the solid defender, nor the scorer. He had a bad game. He played tentative like he didn't want to shoot, dribble, or guard Carmelo. 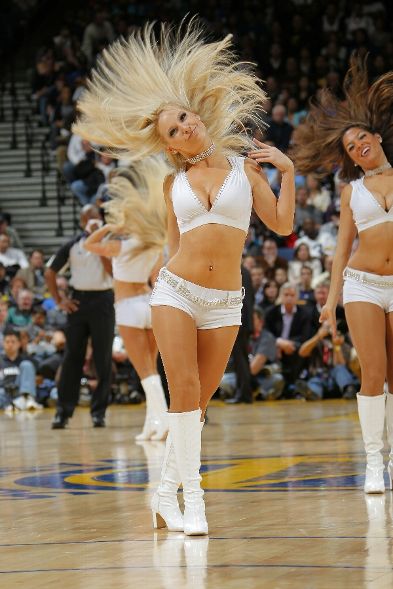 Does this help cheer you up?

David Lee, I Miss You
They've now lost 5 of 6. It's frustrating that David Lee who missed 3 games in 3 years has now missed 6 games because Wilson Chandler doesn't brush his damn teeth. The more he's gone the more it's apparent how valuable he is. He helps Biedrins down low on the boards, is another offensive threat the Warriors desperately need, and . I miss you David, please come back soon.

Transition Defense
I'll make this last point quick. Someone needs to yell at these guys to get back on defense every time down the floor. Someone needs to rotate to the top of the key on offense after a shot. The opposing team should not ever get uncontested fast break layups. Yesterday, I remember the Lakers had two wide open fast break dunks with no Warriors within 40 feet. Tonight, the Nuggets got a bunch of easy buckets off fast breaks with little, if any, resistance from the Warriors defenders.

Because he had his best game of the year and I loved watching him fight down low against Nene and Chris Anderson for rebounds. He's not the most talented guy, but his motor doesn't stop. Tonight, he kept the Warriors in the game with Biedrins on the bench. The other option is Rodney Carney coming off the bench to score 20 on 7-9 shooting.