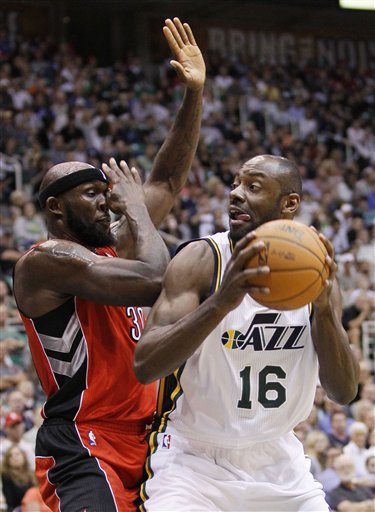 JUMP like the Jazz from New Orleans to Utah for matchups and predictions!

It looks like Stephen Curry is out for the game, so it's going to be a combo of Rodney Carney/ Reggie Williams/ Charlie Bell with a little Monta Ellis sprinkled in running the point. Um, I think I'll take that All-Star the Utah Jazz have at the 1- Mr. Deron Williams who is currently averaging 17-10-5.

At the off guard spot the Jazz have none other than Raja Bell. The Warriors of course waived goodbye to Bell last season (literally). The Warriors have some Montazing stuff at the 2-guard position right now. Monta is putting up 30 ppg, 6.0 apg, 4.3 rpg, and 2 steals. Bell isn't quite doing that.

Over in Utah Andris Biedrins' twin Andrei Kirilenko really seems to be struggling. The man who was once the swiss army knife of hoops is currently averaging more turnovers than assists (4.0 vs 3.8) and as many fouls as rebounds (3). Those are some Mike Dunleavy on the Dubs-esque numbers there. Here in Dubs land the best Wright the Warriors have, Dorell (that's 1 R, 2 L's and 1 Warrior Wonder) has been on FIRE. DWright is hitting over 55% of his tries from downtown to go along with his 20.5 ppg, 5.5 rpb, 1.3 blocks, and 1.3 steals. Let me be a little homerish for a second- I wouldn't trade DWright for Kirilenko straight up right now.

Ooooh, now we're getting down to business. Paul Millsap has been spectacular so far this season. Seriously do yourself a favor and look at his numbers so far this season. 21.3 ppg (64.3% FG), 10.8 rpg, 3.5 apg. Aside from the Laker loss, David Lee has been just the Warriors needed the past 4 years. Take away that Laker loss and Lee has scored 14.25 ppg, grabbed 14.3 rpg, and dished out 3.67 apg. I feel like Lee is just getting into a groove with his new squad, so...

This year is no different than the past 6 for Warrior fans and local media. Yes, the ongoing excuses for Andris Biedrins don't stop and likely won't stop. The Warriors former franchise building block is averaging 6.0 ppg, 7.0 rpg, and 4.3 fouls per game, yet some people swear he's having a fantastic season. I think I'll go with the guy dropping 19.0 ppg and 8.0 ppg, Mr. Al Jefferson. Jefferson has also hit better than 16% of his free throws the past two seasons, I'll add.

Neither bench really does much for me. The Jazz used to have a strong one, but Carlos Boozer departed for big bucks, which brought Millsap/ Kirilenko off the 2nd unit.

Tonight will be a good test for the Warriors. I'm pleasantly surprised by their big wins against the Houston Rockets, LA Clippers, and Memphis Grizzlies. I'm not that surprised by the the beat down they suffered to the LA Lakers because the Warriors simply aren't in the World Champs' league. The Jazz are a real test for the Dubs. Can they hang with a likely mid-low Western Conference Playoff seed?

We shall seen soon enough!