Well, that's that folks. Any hope/confidence that you had in this season can officially be thrown out the window. We lost to the PISTONS. THE FRIGGIN' PISTONS!

When you hear a coach say

About his turmoil with a player, he's either

B - Telling the truth about his relationship with said player, and said player is about to come back and tear it up.

Unfortunately for us, it was option B.

Look, I'm all for giving credit when credit is due, but a loss to THIS Pistons team should not happen. Forget both team's records - it's pretty clear that we have the advantage in every position except maybe the bench.

I can excuse the early sloppy play, but I can't excuse silly substitutions. Why in the world is this guy 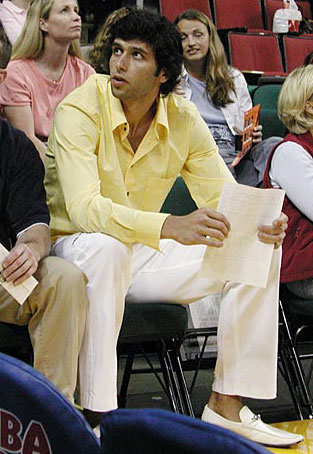 via blogs.seattleweekly.com
Playing at all? And why do I feel like we're going to be asking ourselves that the rest of the season.
This game is a classic case of a decent team (that might be the last time I use that this season) playing down to its competition and not to where it should be. For the Warriors to even establish themselves in the top 10 in the West, they're going to have to win games that they should win! THIS WAS A GAME THEY SHOULD HAVE WON!
It's easy in a loss to find a scapegoat (as we have done every year for the last...too many), but let's not do that today. Let's just say
The fun continues tonight against the Raptors - another 1-5 team that SHOULD be handled. Time to stay positive and do what's supposed to be done.

This is an easy one - David Lee. Not necessarily for his performance (5-11 shooting, 11 points, 7 boards) but for his attitude.

I always enjoy reading his post game quotes - they demonstrate why we brought him in.

“We need to start to establish that identity on the road,” said forward David Lee, who had 11 points and seven rebounds. “We need to find a way and we just had too many careless mistakes. It seems like each guy out on the floor tonight made one careless mistake or so that led to an easy bucket by them or led to a missed opportunity for us.

“We need to forget this one and go into Toronto and get a victory.”