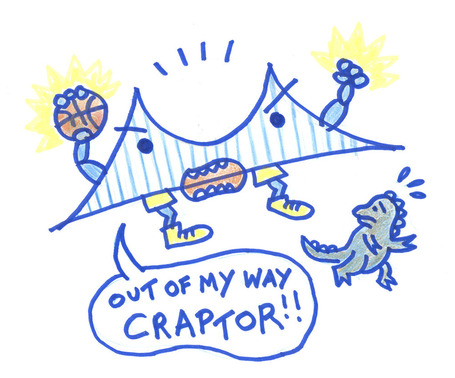 Thanks for the updated pic Sleepy Freud!

The Warriors thoroughly outplayed the Raptors for the first 2.5 quarters. Then the Warriors did what makes it hard for them to win on the road, they fell apart with turnovers and missed layups compounded by fast break dunks and layups going the other way. From then on out, the Raptors gained some confidence, got some life back in their legs, and didn't go away easily.

He threw the Warriors on his back and said, "I'll win the game for us."

And so he did.

Yea, Steph Curry was ridiculous in the 4th quarter. He scored 16 points in the 4th even after missing an easy layup. He killed Jarrett Jack who's supposed to be a good defender. He shot a set shot 3 over him, a stop and pop, and drove by him for layups. He finished with 34 points on 12-21 from the field (2-4 3's) and 8-8 from the line. Even though he had just 4 assists compared with 5 turnovers, he was fantastic in getting this team it's first win on the road.

Combine Steph with Monta's ridiculous line and you have quite a night from the backcourt. Monta ended with 28 points on 10-17 from the field and 7-9 from the line. His 6 turnovers were disappointing just as Steph's 5 were. They just have to take better care of the ball. Despite the turnovers, they combined for 62 points on 22-38 from the field. Wow.

As great as Steph Curry and Monta were and as satisfying as it is to get the first win on the road, everyone is worried about Monta. In a play late in the 4th quarter, he drove the baseline, went up for a shot, and the defenders hit his wrist/the ball/his hand, and he came down hard. He lay on the ground for about 10 minutes not moving. He eventually got up and walked gingerly off the court and headed straight to the locker room. It looked bad and after those kinds of plays, it's hard to not think he won't be out for at least two weeks.

Here's hoping that Monta recovers quickly and can come back. First Steph goes down for a couple games and now Monta. When that backcourt is together, it's one of the best in the league. 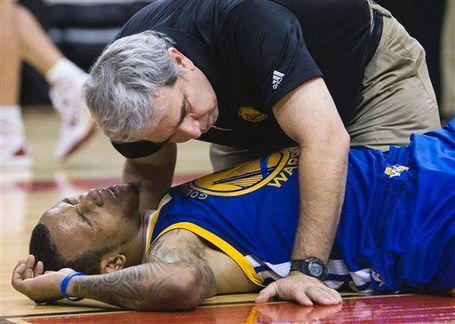 The Warriors won on the road. The backcourt was helped by the 2 big men, David Lee and Andris Biedrins. They hit the boards and did a great job helping the Warriors get the rebounding edge for the night. The Warriors were also helped by a lack of talent on Toronto. Man, what happened to Jose Calderon and Leandro Barbosa? They fell off quick.

I wasn't sure how long it would take with this team to win on the road, but they accomplished it in the third road game. Even though it was against one of the worst teams in the league, they did it. Hopefully this is something they can build on. They can learn that the home team will turn it up a notch as the end of the game gets closer and closer. They can learn how to deal with adversity on the road. It's a step. A small step and we'll see if they can beat an inferior Knicks team on Wednesday at the Garden. Ronny Turiaf, Kelenna Azubuike, and Anthony Randolph welcome their old team to the Big Apple while David Lee returns to the place he once called home. Lee faces the team that slapped him across the face this offseason - I expect a big game from him.

If it wasn't obvious already, Stephen Curry gets the Warrior Wonder. 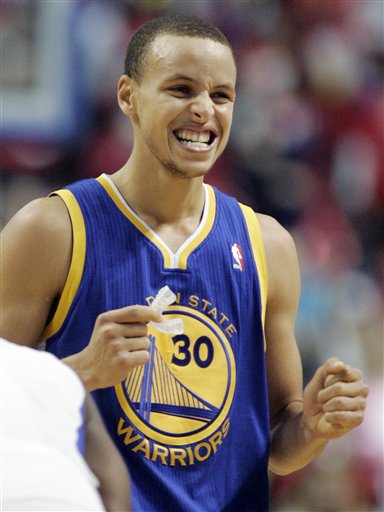 And this is just a funny looking picture. Not funny that Lin got smacked across the face though. 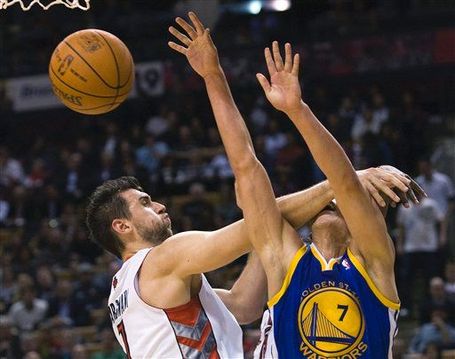