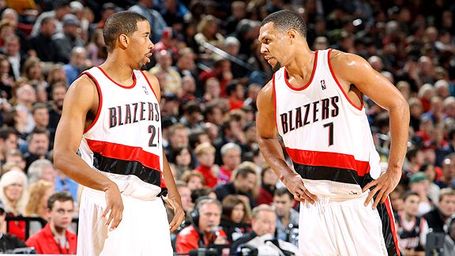 I think my man Dave summed up the Warriors and GSoM best in his fantastic preview over at the mighty Blazers Edge:

Feel the barely-controlled chaos at the always-interesting GoldenStateofMind.

That would be us.

JUMP for a look at the matchups for tonight's game!

Make no mistake. The Warriors are a bad basketball team. Sure they've been injured and they'd played a pretty tough schedule, but ... Now how much of that is Coach Keith Smart's fault? I'm honestly not really sure. I'm not the biggest fan of his rotations or game plans, but it's easy to say that when you're not walking the sidelines with a flawed roster full (the Robert Rowell and Chris Mullin disaster is the gift that keeps giving) of injuries.

All I know is that the Warriors had a legendary coach who could evaluate talent like no other. Players played hard for Coach Don Nelson and he had their back (see his last game coached against the Blazers last season- RECAP #82: Golden State Warriors 122, Portland Trailblazers 116- Golden State of Heart) Sure he was a drama queen, but it was silly to force him into retirement without a solid plan in place. It reeks of the Steve Mariucci mess the Yorks created with the Niners in the early 00's. By the way I'm a lifelong 49ers fan, but I would be utterly embarrassed if they made the playoffs this year with a 7-9 record. It would pain me deeply to see another year of Jed York, Mike Singeltary, and Alex Smith (I swear he's like a cat with 9 lives or something- WHY is he even on the 49ers at this point?). Anyhow check out Niners Nation for more coherent San Francisco 49er insights.

On the other side Coach Nate McMillan aka Mr. Sonic is tops. If the Blazers oddly fired him, there would be a ton of teams lining up for his services.

Stephen Curry is supposed to be out tonight. In his place some combo of Reggie Williams, Acie Law, and Monta Ellis will man the point. Andre Miller's steadiness (and slowness as Brandon Roy would point out so subtlety) should win out.

Brandon Roy is struggling this season and is having some knee issues. On the other hand Monta Ellis is doing all that the Warriors can really ask from him. You are now witnessing Ellis' ceiling and that's not a bad thing.

I'll take Dorell (that's 1 R and 2 L's) Wright over Nicholas Batum any day. That means of course that Batum will be tonight's Warrior Killer.

David Lee is due for a turning point. I wouldn't be surprised if it happened tonight against a very overrated Vin Baker 2.0- LaMarcus Aldridge.

Andris Biedrins is out, but so what? He is proving Chris Mullin and Robert Rowell foolish everyday for thinking he was some sort of franchise cornerstone. The Marcus Camby and Joel Przybilla (not easy to spell) duo wins out tonight.