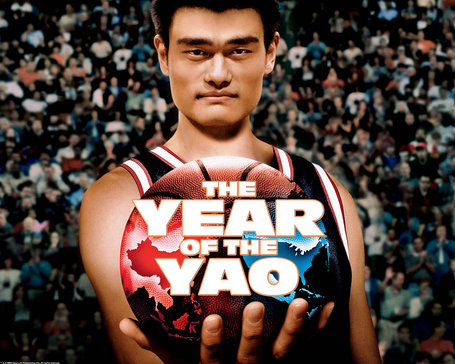 Sadly this is not Yao's year. (pic via www.fwallpapers.net)

Jump because it can only get better than Saturday night's sloppy, boring, and bad loss to the Trail Blazers in Portland!

Yaozers- The global and local influence of Yao Ming

It pains me that the hoops gods have not been kind to Yao Ming. Yao has been great for the NBA. Sure he hasn't always been the most entertaining player to watch with his slow pace and sometimes mechanical offensive moves, but more than being a great center, he has served as a great ambassador for the association. It is next to impossible for a non-soccer or cricket sport to cultivate any fandom in the Indo-China region where 3/5 of the world lives (okay I'm exaggerating the number there, but it's huge- overpopulation will do that), but thanks to Yao Ming basketball and the NBA are popular in China. Even here in the United States Yao has done a ton for Asian America. I remember in the Spike Lee joint Sucker Free City the main Chinese protagonist said to his kid brother something along the lines of "You can play hoops. You can do it. Yao Ming dunked on Shaq. Remember that."

I hope it's not the end Yao, but if it is thanks for the classiness- and I will remember the funk on Shaq.

Here's my bold statement of the day: Rick Adelman is the most underrated coach in NBA history.

Until Stephen Curry comes back this is a point of weakness for the Dubs. The more time Monta spends at the point, the more the Warriors are playing to his weaknesses. Acie Law and Reggie Williams are not the answer as starters at the point either. For the Rockets the Aaron Brooks (a bonafide Warrior Killer last season) and Kyle Lowry (solid defense) duo isn't spectacular on most nights, but they're steady and they're good enough to get the job done.

Here's one debate that I'd like to resurface from the Warriors and Kings Northern California mini-rivalry (and when I say mini I really do mean mini because of its inconsequence in the larger NBA landscape): Monta Ellis vs Kevin Martin. They're both big time scorers (Monta 24.5ppg, Martin 23.2ppg) who have played on a lot of losing teams. Even though Monta is what you'd call a striker and Martin is what you'd call a shooter, Martin actually gets to the line much more often (8.5 FT attempts to Monta's 5.9). I've always found it a bit uncanny how Martin draws so many shooting fouls on jumpers. Watch him get to the line at least 10 times tonight and explode for 30 points. Monta should get 30 as well, but his will come from a less efficient variety. Truth be told, I'd trade Monta for Kevin Martin straight up, but that could simply be a grass is greener thing and more than that it probably wouldn't change much record-wise for the Dubs.

It's Shane Battier versus Dorell Wright. I'll take D Wright Stuff this evening. He's more of a threat to score and he's already had 4 double-doubles this season.

Luis Scola is another certified Warrior Killer. I'd estimate that David Lee is about 65% right now. 'nuff said.

Chuck Hayes is yet another Warrior Killer featured on this roster (actually now I'm starting to get scared). This 6'6 big man can randomly morph into Charles Barkley when he faces the Warriors. I have no idea why. I'd love to see Louis Amundson show us what's he got, but he seems to be coming back to form from injury fairly slowly. I was expecting Amundson to make Andris Biedrins expendable by this time of the year, but he hasn't.

Once again, I just won't go there.

Will Yao Ming ever play in the NBA again?