GameThread #31: Golden State Warriors at Atlanta Hawks — "Atlanta Is Ours, and Fairly Won."

Share All sharing options for: GameThread #31: Golden State Warriors at Atlanta Hawks — "Atlanta Is Ours, and Fairly Won." 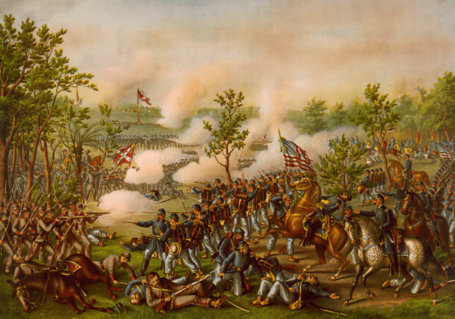 146 years ago this summer — roughly, as far from Don Nelson's date of birth as we are today — Major General William Tecumseh Sherman commanded the Union forces to decisive victory in the battle of Atlanta. The loss dealt a major blow to the Confederate Army; they suffered an estimated 8,500 casualties, to the Union's 3,641. Still, the Confederacy managed to hold the city till a bit later in the fall, when, following an extended period of shelling, the Mayor finally surrendered the City to Union forces. General Sherman sent a telegram to Washington that said, "Atlanta is ours, and fairly won." He took over the city for a couple months, then evacuated and effectively burned it to the ground, destroying an estimated 3,000-5,000 buildings, leaving only 400 standing. (Read more).

Tonight's battle of Atlanta at Philips Arena is less significant by several orders of magnitude, but still fairly pivotal for our Northern (California) forces if they want to start seriously entertaining thoughts of a low playoff seed. Make the jump for a few thoughts on the Hawks and some possible keys to victory.

This year's Hawks look remarkably similar to those of last year and the year before that — centrally located between the elite Eastern powerhouses and the bubble teams. Their weapons are the same as always: the solid interior scoring, rebounding, and D of Al Horford; the dynamic all-around play of JSmooth; the relentless perimeter gunning of Joe Johnson, Mike Bibby, Jamal Crawford, and Marvin Williams. Structurally, think Orlando Magic lite. Their ultimate fate will almost certainly be what it's been last couple of years: destruction at the hands of Boston, Orlando, or Miami, or even Chicago or NY. In the meantime, they can enjoy being a "solid" 45-50 win team, savoring the odd victory over a powerhouse (viz. last Monday's 91-81 over the Magic), and mostly beating up on the Golden State Warriors of the world.

Defeating these guys is a tall but not insurmountable order. The Dubs will need to summon a Sherman-like fire and resolve. They'll need to rotate and close out like madmen on D. They'll need to move the ball on offense as crisply as they did in the second half Monday against the 76ers. Maybe most importantly: with Biedrins out (per MTII) they'll need to work much harder on the boards than they did in their wins v. Portland and Philly. You can slide by with getting outrebounded 54-44 and 53-32 when you're playing weak/mediocre teams and sinking 45-65% of your three-pointers. Against a good team, on the road, that kind of shortfall is almost certainly a recipe for disaster. Crash. The. Glass. This applies not just to Thor Amundson and Friday Udoh — who have been rebounding so dispassionately they make Brandan Wright look like Rodman — but to the medium-sized and small Warriors as well. Dorell, Steph, and Monta are all rebounding below their career averages; if they want to win this game, they'll collectively need to channel some of Biedrins' Windex-ian soul.

A win in this first game of this Dixie campaign gets the Warriors to 13-18 — only 2.5 games out of the 8th playoff seed (now jointly held by Houston and Portland). A loss puts them at 12-19, with even more daunting battles versus Orlando and Miami down the road. Sherman's March starts here...