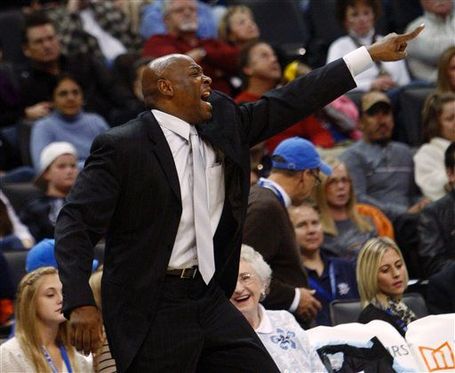 I think he's got more passion than his players

For awhile there this was a pretty disgusting game. The Thunder came out like they were taking out their anger from the previous loss to the Raptors on the Warriors. The game started out 18-2, and then 28-9, and then the 1st quarter ended 32-17. I was laughing during that first quarter watching the easy layups, alley oops, and extreme ease with which the Thunder made the Warriors look like Angola facing the Dream Team. Occasionally, the Thunder would have a mental lapse and let the Warriors score too.

Then the Warriors found their legs or skill or whatever it was. They won the 2nd quarter 25-22 capped off by an Andris Biedrins offensive rebound who then passed to Reggie Williams for a free throw line jumper as the clock expired. But they were still down by 12.

The 3rd quarter rolled around and the Thunder made some adjustments. They put the Warriors back in their place by winning the 3rd quarter 36-28. It was a quarter marred by lots of fouls and free throws, thus the high scoring quarter.

And then I fell asleep. I was lying on the couch with a nice warm blanket and the Warriors losing by 20. I figured my 16 point loss prediction was going to be close. Oops, because the Warriors came back, a furious comeback really. 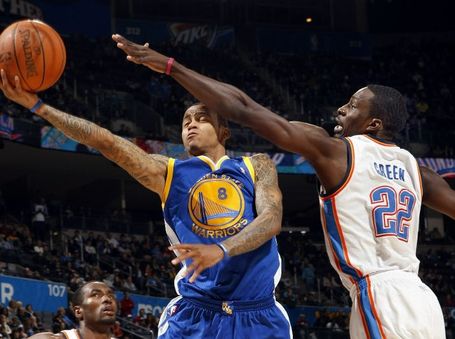 I woke up with a about 2 minutes to go feeling quite rested, looked at the score and couldn't believe it. Warriors 98, Thunder 105. It was close! Then Nenad Kristic got an offensive rebound, put up the shot, it went in and he got fouled. Warriors were back down 10 and the game was basically over. They needed to make stops every time down and they just couldn't secure that rebound.

They did have another chance down 6 with the ball and under a minute to play, but Reggie Williams missed a 3 and the Thunder got the rebound.

It was a great almost comeback. They even got as close as 3 with under 25 seconds left. They outscored the Thunder 39-24 in the 4th. They outscored the Thunder by 10 from the start of the 2nd quarter to the end of the game. Had they not dug such a massive hole in the 1st quarter, maybe, just maybe they pull this one out for a big upset. But the game is 4 quarters long and the Warriors need to play that way.

How did this happen?

The 4th quarter wasn't one huge run where the Warriors had some big 12-0 comeback because the Thunder still scored 24 points in the quarter. It was more of the Warriors slowly chipping away at the lead and just running out of time. Steph scored 10 including 8 in a row in the span of 1 minute. Reggie scored 8 and Monta scored 12.

The Warriors needed a perfect quarter and were just a few stops away from making that happen.

The 4th quarter is something the optimistic side of me hopes the Warriors can build on going into Dallas and San Antonio. The pessimistic/snarky side of me, the one that wrote the game thread and the poll, wants to brush it off as just a Thunder collapse. Maybe it's a little bit of both. But a loss is still a loss and the Warriors keep collecting them like they're going out of style. Stop it.

Free Throws
As we all expected, there was a ridiculous disparity in free throws. The Thunder shot 40 free throws to the Warriors 21. What also didn't help was the Thunder making 37 of them, good for 92.5%. The really almost shot as many free throws (40) as Warriors field goals made (42). The Warriors are going to have this problem all year so in order to win, they'll just have to outshoot the other team from the field. 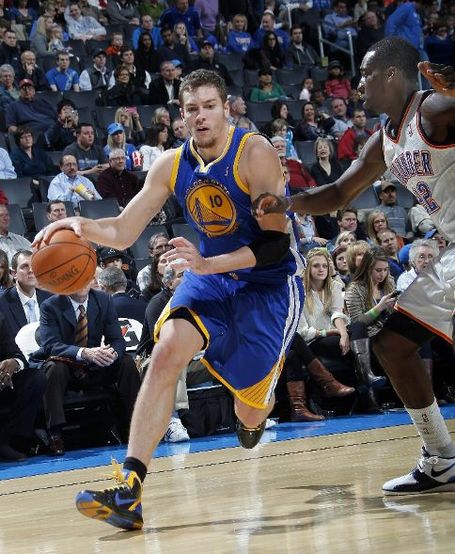 Has to be Stephen Curry. He was lights out tonight on offense. His defense was his usual kinda soft, too slow, not strong enough, etc. But he was on fire with his shooting. 39 points (14-20 FG's, 4-7 from 3, 7-7 FT's), 6 assists, 5 turnovers (he still makes too many careless turnovers and one handed passes), and 2 steals. 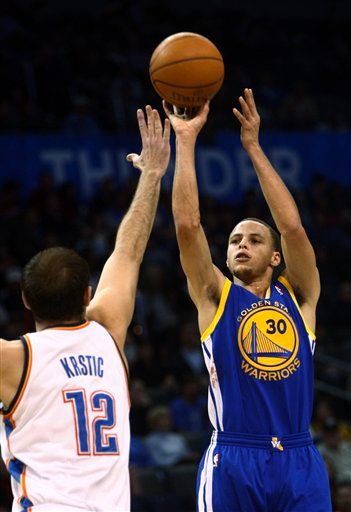