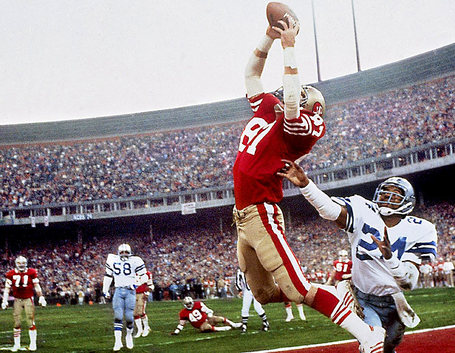 So ... did you hear the one about the downtrodden team from the Bay Area whose fortunes magically changed one day against a mean ol' team from Dallas?

Tonight's Warriors/Mavs showdown may not be quite as momentous and franchise-changing as the 1981 NFC Championship game, or the first round of the 2007 NBA playoffs, or, you know, the 2010 World Series, but hey, you never know when the bleeding will stop, the worm will turn, the shoe will be on the other foot, etc.

Somehow, looking at the schedule to start of this season, this game didn't seemed like as tall an order it as does now. This was supposed to be the year the Mavs — coming off ten straight 50+ win seasons — started their inevitable decline. But as with the Lakers, winning habits tend to die irritatingly hard. Dirk Nowitzki is averaging 24.9 ppg on a ridiculous .625 true shooting percentage. Jason Terry is still Jason Terry. Caron Butler has improved. Tyson Chandler has been a big upgrade over Erick Dampier. Jason Kidd may be showing some actual signs of decline — his scoring efficiency is way down — but he's still guiding the ship with a steady hand, dishing nearly 10 assists per 36 minutes, to only 2.5 turnovers. While most of my late ‘80s-early ‘90s Cal contemporaries count our grey hairs and wax nostalgic about Kurt Cobain, Public Enemy, and young Winona Ryder, the 37 year-old WunderKidd continues to thrive against the highest level of competition.

In sum: a 16-4 team, tied for second best record in the league, coming off nine consecutive wins.

Yup, another year, another annoyingly solid Mavericks team. Waiting for their decline is starting to feel like a fool's errand. As Michael Corleone says of Hyman Roth in Godfather II: "[he's] been dying from the same heart attack for the last twenty years!"

And in this corner... your shaky, slip-sliding 8-11 Golden State Warriors.

But hey, Corleone ended up nudging Roth not so gently into that good night. And ... the Giants won the freaking World Series. Chins up, Warriors Nation — tonight the tide turns. Or not...

If the Grim Reaper came to your door and forced you at sicklepoint to give one of these back to Texas, which would you choose?