Recap #22: Golden State Warriors 94, San Antonio Spurs 111 - Silly Pee-Wee, There is No Basement at the Alamo

Share All sharing options for: Recap #22: Golden State Warriors 94, San Antonio Spurs 111 - Silly Pee-Wee, There is No Basement at the Alamo

Well, I've got plenty of bad things to say about tonight's game, but it kinda seems silly seeing as I don't think anyone expected a great performance tonight. Was the coaching still bad? Sure. Was the bench still weak? Yup. Do all of Sleepy's list of 'almosts' from last night's recap still stand? Yes. We didn't really learn anything new about this team tonight. So what should we talk about?

Yes, there are thousands and thousands of uses for corn. All of witch I﻿ will tell you about right now!

We may not have learned anything new about the team, but that doesn't mean there weren't any surprises...

The Spurs delivered a beatdown, and despite the Warriors hanging around for most of the game, it never really felt like the outcome was in question.

With 31 points on 11-16 shooting, including 8-10 from beyond the arc, I think it's safe to say that Reggie was in full effect tonight. Good job Mr. Potato Head. Not that it mattered...

So what did matter? 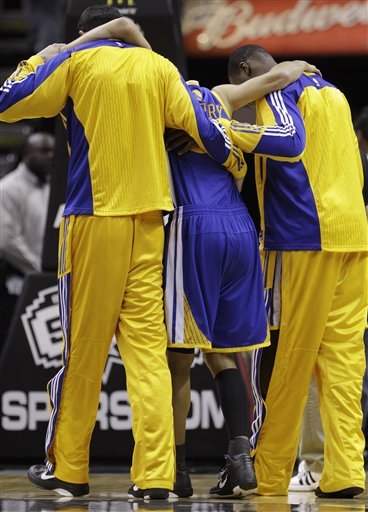