Share All sharing options for: RECAP: Warriors 104, Thunder 112 - Durantula Is a MONSTER 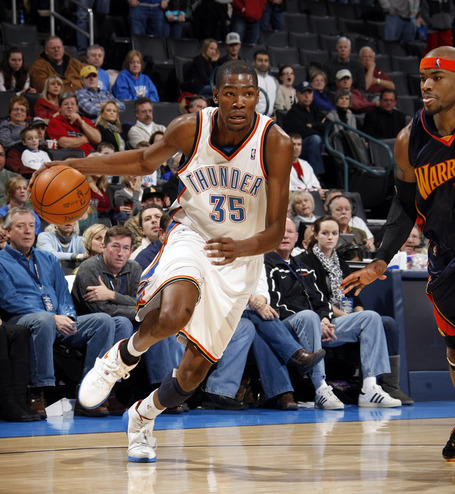 Did anyone think we could ACTUALLY win this game? I mean really, our starting 5 vs. their starting 5? Not only did they have YOUTH (something we claim to have, but it's all injured) but they have EXTREME talent (something we, sorta have?)

Instead of having my normal whine and moan sessions with an extra hint of emo, I decided to focus on the best part of last game.

No, it wasn't Stephen Curry's 14 points with 4-10 shooting and 5 turnovers (that's not a good ratio for a backcourt)

It was this man. 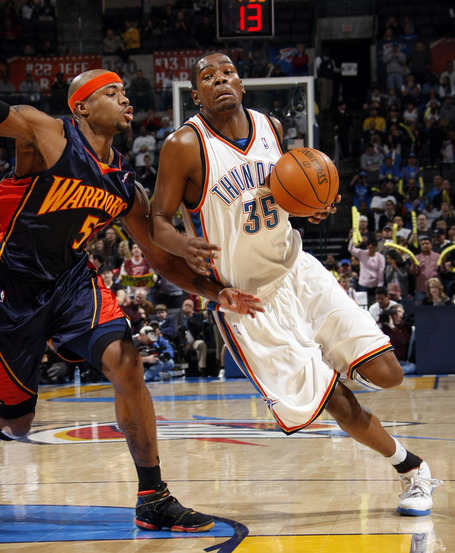 I have now decided (since it's allon me) that Kevin Durant is one of the best players to watch in the NBA. You think Monta's got moves? Look at this guy...straight up, he's going to be a top 5 NBA Talent in the next few years. He's got moves, he's got shots, he's got rebounding abilities, he's got...

I briefly mentioned this in the Open Thread, but the Blazers have got to be kicking themselves in the "you know what's" for drafting Greg Oden over Durant. I remember at the time it was a toss-up - either was looking as a good pick and both were slated to be "great" draft choices.

A few years later, we find out Greg Oden was actually 45 and has terrible knee and leg problems while Kevin Durant was actually 19 and has yet to hit his prime. In every game, he's busted crazy energy, extremely good shooting average, and great rebounding ability. I don't know where his game is lacking (I'm sure it's somewhere), but this kid straight has game.

Speaking of 45...anybody notice that he scored 45 points against us last night? Sure, credit it to the Warriors "poor" defense, but that's also some amazing skill by this man. ESPECIALLY because it came off 16-21 shooting, 2-3 three-pointers, and a smooth 11-11 from the charity stripe. Oh ya, want to toss in 11 rebounds with that game?

Look, I'm not trying to say this guy is the best in the game - that's obviously a debate with Kobe and LeBron. But I think sooner, rather than later, we're going to have to toss his name into that mix.

Hey, Larry Riley - want to make a move? Find a way to get Durantula on the team so we can sell some more tickets and actually be fun to watch.

I'm gonna go ahead assume I can't give this to Kevin Durant since he's not on the Warriors...

So how bout I give it to Coby Karl? Not only is he our latest edition, but he's going to provide us with great fotos (Mike Duleavy-eque) while he's around!

Big thanks to Coach Karl of the Nuggets for reasons a funny son! 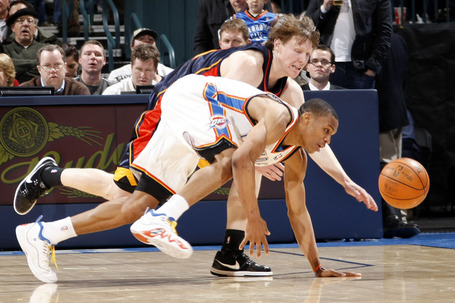