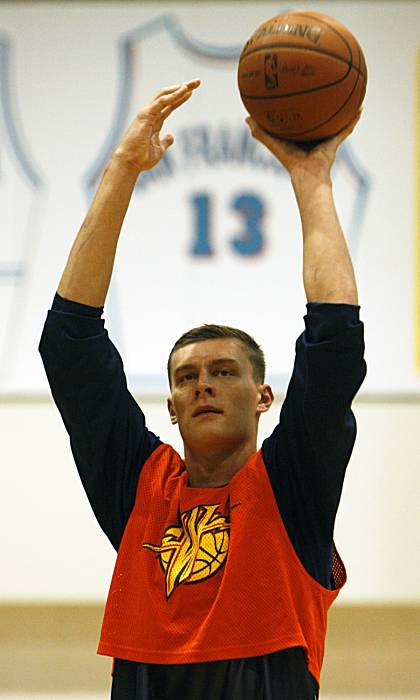 Biedrins at the free throw line?

Jump for the info!

Now don't get me wrong. It's perfectly reasonable and understandable that the Warriors would want to trade Andris Biedrins. He's an elite rebounder and by all accounts a good veteran teammate, which counts for a lot on a franchise that gets beat on the glass nightly and recently had to part ways with the fraudulent Captain Jack. But the reality is he's probably leveled off and has been fairly injury prone the past 2 seasons. He is far from being the untradeable big man you build around with his incredibly soft defense (though he has had two welcome HUGE nights protecting the paint this season), ridiculous foul rate, weak screens which he rolls from way too early, lack of any low post moves, and zero commitment to developing a jump shot or free throw shot on par with your average 7th grade 12th man (yes, it's that horrendous- he's shooting 13% on the season).

BUT dumping Biedrins' contract just for the sake of lowering the payroll is not a win by any means for this team on the hardwood in the short or long term. Any expiring contracts the Warriors collect are not going to be used to net the likes of Pau Gasol or Kevin Garnett via trade. Chris Cohans' Warriors just let those go to waste to retain D-Leaguers. Any cap space the Warriors open up for the 2010 offseason and beyond is just going to be used to bid up the package a star player gets from another team (a la Gilbert Arenas and Elton Brand in the summer of 2008) or to overpay someone a la Corey Maggette.

Trading Biedrins is a fine strategy. He is by no means untouchable or a legit franchise cornerstone despite what Chris Mullin and Robert Rowell may have led you to believe 2 summers ago.

Trading Biedrins to simply dump his contract however is a loser move... meaning look for the Warriors to dump Biedrins' contract any day now.