UPDATE (11:54am): My man Seth has a great related piece Making Sense Of All The Amare Stoudemire Trade Rumors and Extension Talks over at Bright Side of the Sun. 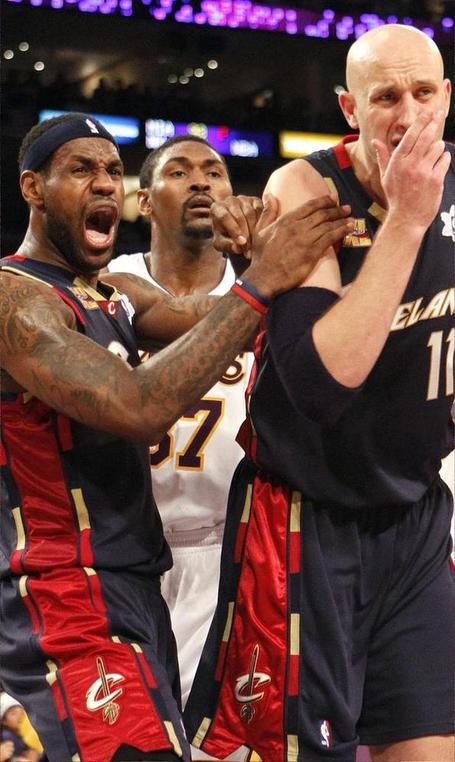 LeBron and Big Z don't like the smell of things, but I'm not sure why.

BUT something else could go down for the Warriors. JUMP to find out!

Commercial interruption: I'd hate to see Big Z depart from the Cleveland LeBron's

"They're going to need some hand sanitizer after that!"

The Cavaliers would send Zydrunas Ilgauskas and J.J. Hickson to Phoenix in exchange for Stoudemire, one of the league's most dominant big men.

While Cleveland remains in talks with several other teams, the club, from management down to the players, has settled on Stoudemire as its first choice.

Cleveland is also talking with Washington about acquiring Antawn Jamison, as well as Indiana about Troy Murphy. Meanwhile, Golden State is trying to entice the Cavs into taking Corey Maggette for Ilgauskas.

I'm sick of seeing endless salary dumbs dumps by this team, but this one makes a lot of sense. Unlike trading Andris Biedrins right now (see RUMOR: NBA teams talking Anthony Morrow + Warriors asking price for Andris Biedrins too high) there isn't a more opportune moment of Corey Maggette's 5 year $50 million deal. He's netting nearly 21ppg in less than 13 attempts from the field and has only missed 4 of the Warriors 51 games this season. That's as good as it gets. There is virtually no upside to Maggette at this point and it's not like the Warriors are winning a ton of games with his maxed out production on a pretty lucrative long term deal.

If there's a time to sell high on Maggette, the time is now. Next season when he's 31 with a remaining 2 years on his deal at $21 million with additional wear and tear and most likely more missed games it's going to be even harder to move him. It might even be impossible and necessitate a contract buy-out which would have minimal benefits for the Warriors salary cap structure going forward.

A Maggette for Ilguaskas swap does not work straight up, so here's two possibilities:

* Remember the team that trades for Big Z will most likely buy him out. Big Z will then have to practice funky handshakes for 30 days by himself and then most likely re-sign with the Cavs.

On the Suns- If they pull off an Amare for Ilguaskas and Hickson trade that will cement Steve Kerr's status as one of the worst GMs of all time. Why would you ever make a trade like that? The Suns really aren't that far from collecting the 4th seed in the 2010 Western Conference Playoff bracket. Why blow up ship and rebuild now right after Nash was re-upped this past summer? Why take a salary dump trade like this when something along the likes of Andris Biedrins + Brandan Wright and more were on the table just a few months ago? Why not at least take Corey Maggette and try to do some damage this year? Simply put, what is Steve Kerr doing in Phoenix?

More from around the association on this deal and more: