2010 NBA All-Star Sunday: Nothing says "I love you" and "Gong Hay Fat Choy" like tight dunks and alleyoops!

Share All sharing options for: 2010 NBA All-Star Sunday: Nothing says "I love you" and "Gong Hay Fat Choy" like tight dunks and alleyoops! 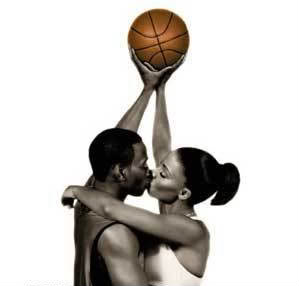 If you're wondering how you should be celebrating your Chinese/Lunar New Year AND/or Valentine's Day, you should be showing your lady or guy-friend the arts and poetics of hang-time.  Save money by skipping cirque-soleil tickets and, instead, see the airborne feats of Kobe Bryant and Brandon Roy!

Don't get me wrong, these are all fine players having stellar seasons in their own right.  But if the all-star game is about ‘star-power' and, more importantly, entertainment (hello NBA Dunk Contest organizers...), the NBA needs to find some new marketing tactics for this weekend's festivities.

What can we do to spice up this NBA holiday?  Click to see my recommendations...

1. "Themes" for the Dunk Contest 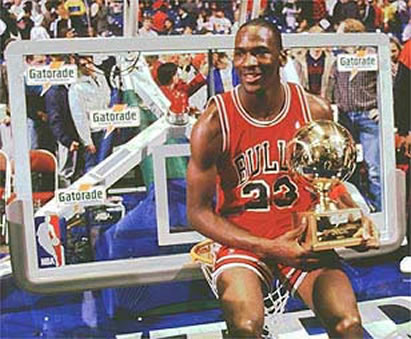 (Michael Jordan's encore dunk: dunk then land by sitting on the hoop with your trophy!)

My suggestion to a friend a few days ago was that the dunk contest this year should be who can do the best "in-game dunk."  What do I mean by that?  More specifically, I want to see which dunk participant can have the most jaw dropping, "Oh MY GOODNESS" dunk on THE best shot blocker in the league for that season.  I'm talking SLAM-insert posterization dunks!

Why does this even make sense?  I'll tell you why!

SO, what do us fans love to see in games? Great dunks in people's grills!  Think about it, players and fans relish in the tallest player or a hated NBA player getting POSTERIZED.  Tracy McGrady's post-season baseline dunk where he practically rides Shawn Bradley like a mechanical bull might be one for the ages.  OR Vince Carter's dunk on Frederic Weis in the Olympics back in 2000.  Gerald Wallace and Shannon Brown are two great in-game dunkers, so why not play to their strengths??? 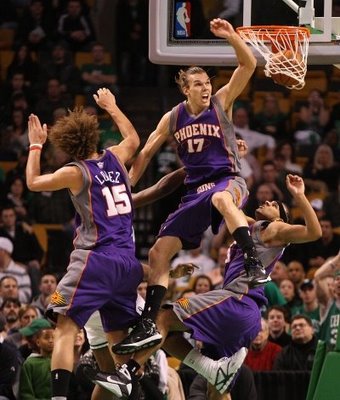 (imagine a dunk challenge where you had to dunk on 3 defenders...)

I hate to be an a**hole, but do we really need to validate the improved footwork of NBA big men like Chris Kaman?  OR remember the obligatory nod to Jamaal Magloire just because they needed a center (and possibly a Canadian).

Since the NBA is trying to push the d-league as a pipeline for more job opportunities for athletes pursuing a job in professional sports and as a farm-system to develop players, why not showcase them on one of the biggest stages during the NBA season?

I personally just want to see the best of the NBA; we don't need filler big-men or elder-statesmen like Jason Kidd.  AND given how the d-league has some of the most exciting dunkers out there, this seems like an obvious marriage of NBA institutions.

People have been lauding Kevin Love's outlet passes as if they were up there with legendary moves like the sky-hook or the slam-dunk.  After watching him one game a few days ago, his outlets are pretty damn impressive.  Two handed outlets baseline to baseline (practically) with such speed and more importantly precision is incredible.   Or who could forget or remember Adonal Foyle's highly-stylized one-hand passes?  Lets show off how athletic but, more importantly, SKILLED the game of basketball really is, especially in the era of "freakish athleticism."

Post-entry passes?  This, too, is an underrated skill.  Hitting your big man in the right position before help defense comes is tough.  How often do you see a big man fighting for position and the dude on perimeter not realizing, only to have your big man frustrated and jawing back at his teammate later?  OFTEN!  This is a skill that should be highlighted in the NBA!

Anyway, this all-star game should be filled with excitement from Lebron James, who I think is more David Copperfield than Magic Johnson, given the type of craziness he can do with the rock.  There are a lot of first time all-stars like Rajon Rondo and Kevin Durant, who should be able to provide some fresh-blood to a somewhat staid format.

Which player do you most want to see in today's mid-season classic?  And who do you think will provide the most highlight worthy moves?  Which player will walk away with the Most Valuable Player award?

Drop your predictions below...