I can only imagine what the poll results are going to look like for this one. 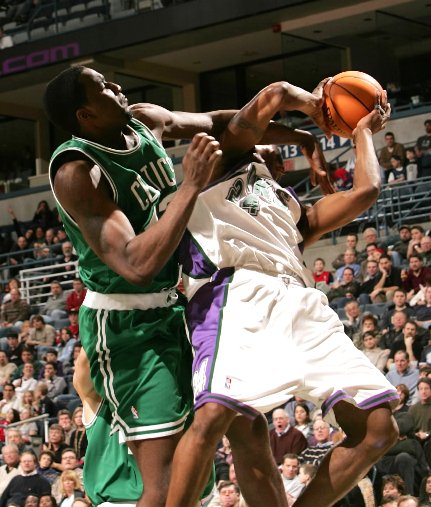 His game isn't exactly pretty, but Kendrick Perkins would be the Warriors toughest and most physical defender since... well, since Erick Dampier was trying his best to sucker Mark Cuban into that ridiculous long-term deal.

From web's world of hoops Hoopsworld:

The rumor out of Dallas was that Boston has discussed a deal with Golden State that would send Ray Allen, Kendrick Perkins, and J.R. Giddens to the Warriors for Monta Ellis and Andris Biedrins.

The trade is cap friendly and it was just one of the rumors floating around this past weekend. It was reported that Boston has also reached out to Sacramento and Philadelphia as they continue to shop Allen for younger talent.

Parting with Perkins would be tough since he's capable of defending the big men in the East, something Biedrins could struggle with. But in order to pry young talent away from teams, it's going to take more than just Allen's expiring contract.

Giddens looks to be a throw-in to make the numbers work, so let's quickly examine the other players involved here.

Beantown and Ainge are looking to go all in this trading deadline. I can respect that. This might very well be the last chance they get to contend for quite some time. Take a look at these numbers:

If you can believe it. those are the numbers Kevin Garnett and Ray Allen respectively have been putting up this season. There's nothing superstar about them. Not even close. They're on the decline. (Yes, call me Captain Obvious- I deserve it for that one.)

The Celtics obviously need to do something if they're remotely interested in competing against the Cleveland Cavaliers, Orlando Magic, or Atlanta Hawks this spring. We won't even get into the LA Lakers. But are Monta Ellis and Andris Biedrins the solution?

I can't say I'm really feeling the Ellis-Rajon Rondo pairing. With the kind of numbers Rondo is putting up this year, I'd be very hesitant to pair him up with a ball dominating, smallish 2-guard. Anything that would take the rock out of Rondo's hands and put it in the hands of the league's turnover leader doesn't seem so bright.

Biedrins is in the midst of his worst season since his second year in the league. Instead of throwing the uber-physical Perkins at the other Eastern Conference bigs in the playoffs, the Celtics would be throwing an undersized and soft center out to the wolves. That just doesn't seem like a good idea, especially when there's no coach like Don Nelson to take advantage of Biedrins' above average agility for a 5 or put up with his soft defense.

In short, despite what the Warriors homers would like to make you believe, Monta Ellis and Andris Biedrins are not the answer for a championship contender, especially the Celtics. The Celts should be thinking A-M-A-R-E, but that's another story for another time.

For more on the Boston Celtics check out our brother site the world famous Celtics Blog.

You can make some great arguments why Kendrick Perkins is an upgrade over Andris Biedrins. Perkins is a tough, rugged defender (arguably dirty) who can protect the paint and play man D and frustrate pretty much any big man out there. Biedrins simply cannot do and never has. Perkins can set some vicious screens to open up great looks for shooters. Biedrins sets soft screens which he leaves too early that never open up space for his teammate handling the ball to either drive to the lane or pull up for a good look; his screens are about rolling to the bucket (which he does extremely well). Given the contracts (1 year remaining at $4.4 million for Perkins vs 4 more years at $9 million for Biedrins) and the slight age difference I'd actually rather have Perkins.

So that's fine. Andris Biedrins for Kendrick Perkins. Perfectly reasonable for the Warriors.

But Ray Allen for Monta Ellis? Here's what I said before:

While Monta Ellis is having a superb season considering his Moped Gate comeback, heavy minutes, and lack of help (due to both lack of talent and perpetually injured teammates), it's hard to call him untouchable. He will never be a legit point guard in this league given his seemingly unsolvable high dribble and addiction to the dangerously sweet things in life... like apple TURNOVERS. His defense is vastly improved, but he's not exactly a shutdown defender. Monta's hoops IQ leaves a lot to be desired, especially at the end of quarters and games. His history of tantrums is indeed a huge red flag.

It's also true that the Monta Ellis- Stephen Curry backcourt probably won't go all that far. Baron Davis - Jason Richardson aka BoomRich they are not.

BUT trading him for an expiring contract at this point is just foolish. Absolutely foolish. Ray Allen is on the decline and will not re-sign with the Warriors this offseason. That cap space is worthless for a team owned by Chris Cohan.

Don't get me wrong. I do love Ray Allen. I mean who doesn't love some Jesus Shuttleworth? But this isn't about the Warriors brining in Ray Allen, it's about dumping more money from the books.

By the way where are all those bandwagon Warriors fans and media who were hyping up Monta Ellis and Andris Biedrins as the FUTURE? Where are all those folks who were so oddly ecstatic to destroy WE BELIEVE to build around these two flawed players?

I can hear the crickets chirping on this fine Bay Area February evening, but not you.

Also thanks to loyal GSoMer sam23 for the heads up in the FanShots.