UPDATE (10:28pm): MT tweets some corroboration for this report and says it could happen closer to Thursday if Cleveland can't pull off the other trades.

Don't you just love this time of the year? We've got a little something for everyone: 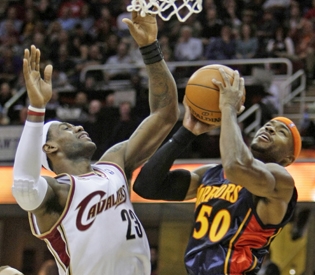 They sure do look happy together!

Not satisfied? Maybe this one will do the trick... JUMP!

Maggette for Big Z? It seemed like something only the Warriors would want (read: salary dump to help owner Chris Cohan), but it looks like the Cavs might be using it as Plan 2A. Words from Chris Broussard of ESPN The Magazine:

The Cleveland Cavaliers' pursuit of Amare Stoudemire continues, but in case they can't land the Phoenix Suns' All-Star forward, they have begun talks with the Golden State Warriors about Corey Maggette.

In addition to speaking to the Washington Wizards regarding Antawn Jamison and the Indiana Pacers regarding Troy Murphy, Cleveland is in discussions with the Warriors about Maggette, according to four sources with knowledge of the talks.

It is not clear whether the Cavaliers' second-choice is Jamison or Maggette. The discussions with Golden State have centered around Cleveland sending Ilgauskas and his $11.5 million expiring contract to the Warriors for Maggette. Other players, perhaps Cleveland's Danny Green and Golden State's Devean George, would have to be added to make the deal work financially.

LeBron James is aware of Cleveland's interest in Maggette, and sources close to him say he believes he could help the Cavaliers.

For obvious reasons that counts for a LOT.

Again it's time for the Dubs to SELL HIGH on Maggette:

I'm sick of seeing endless salary dumbs dumps by this team, but this one makes a lot of sense. Unlike trading Andris Biedrins right now (see RUMOR: NBA teams talking Anthony Morrow + Warriors asking price for Andris Biedrins too high) there isn't a more opportune moment of Corey Maggette's 5 year $50 million deal. He's netting nearly 21ppg in less than 13 attempts from the field and has only missed 4 of the Warriors 51 games this season. That's as good as it gets. There is virtually no upside to Maggette at this point and it's not like the Warriors are winning a ton of games with his maxed out production on a pretty lucrative long term deal.

If there's a time to sell high on Maggette, the time is now. Next season when he's 31 with a remaining 2 years on his deal at $21 million with additional wear and tear and most likely more missed games it's going to be even harder to move him. It might even be impossible and necessitate a contract buy-out which would have minimal benefits for the Warriors salary cap structure going forward.

I will also add that it would be nice to see Maggette playing on a winner and contending for the 2010 NBA Championship. Amidst the constant unprofessionalism from this team's ownership and many Warriors players the past 2 seasons, Maggette has been a leader and a solid character. If he ends up on a winner come Thursday, good for him.
For everything you could ever want to know and more about the Cleveland LeBron's check out Fear the Sword.