Share All sharing options for: Game Thread #52: Warriors at Lakers -- Starless in Tinseltown 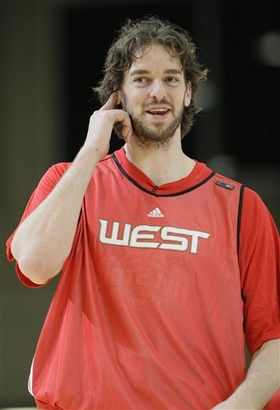 This one could get ugly.

Remember that warm and tingly feeling you got watching Stephen Curry put up that triple-double against Boom Fizzle? Still smiling from watching Curry stand up against the big boys in the three-point contest? Well, wipe it off your face, and forget about it. Slap on some cold water, and steel yourself, Warriors fans. Real Warriors basketball is about to re-commence, against the World Champion Lakers in Staples Center.

And if its real Warriors basketball, that means the Dubs are going without some key players. Monta Ellis is out, and possibly Corey Maggette as well. Monta is somewhere in Alabama getting his knee checked by the guy who did his ACL surgery in high school. ("Uh oh" time or simply trade deadline shenanigans?) Maggette's finger fell off again in practice yesterday. He'll probably stick it back on with tape and suit up, but you never know. If those trade rumors can be believed, the franchise's continued hold on him is even weaker than his hold on that finger. He might be held out as a precaution.

I'm having a little trouble feeling optimistic about this game. Curry ran the team beautifully against the Clipper zombies in the last game, picking up 13 assists. Who is he going to find open in this game? Morrow being guarded by Kobe? Tolliver being guarded by Odom? There was a lot of noise about Monta being expendable after the last game. I expect that noise to subside considerably after this one. The lack of a superstar to draw the triple team should make it excruciatingly difficult for the Warriors to find an open shot against the Lakers' all-world defense.

On the other side of the ball, Monta's absence means Kobe Bryant will be guarded by ... who? If the answer's Anthony Morrow, Staples Center will catch fire before the game ends. I think Curry or Watson are more likely candidates, with Morrow trying to stay in front of Fisher or Artest. Anyway you look at it, it will be a miracle if the Warriors find a way to stay competitive in this game.