Share All sharing options for: RECAP: Lakers 104 Warriors 94 -- Battle of the Bigs 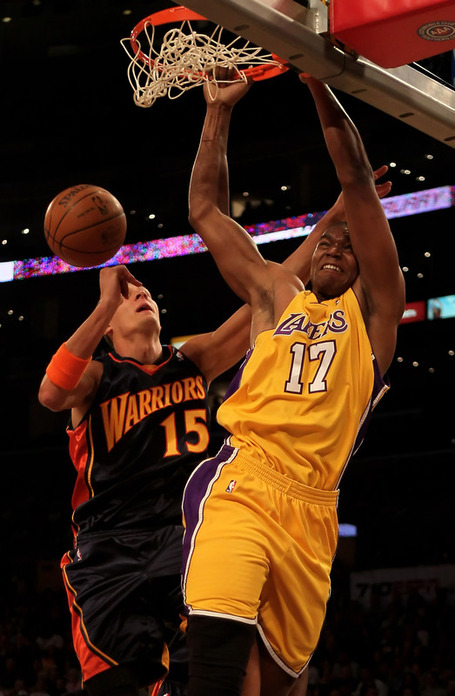 The Warriors were served up a big heaping plate of win in this game. Unfortunately, Stephen Curry simply could not pick up his fork and eat. One game after lighting up the Clippers for a triple-double, and fresh off a triumphant all-star weekend in which he got second in the three point shooting contest, the Warriors rookie simply couldn't buy an outside shot. Curry shot 5-21 from the field, and 1-10 from three point land, on a night when a better effort might have gotten the Warriors a surprise win in Staples Center. 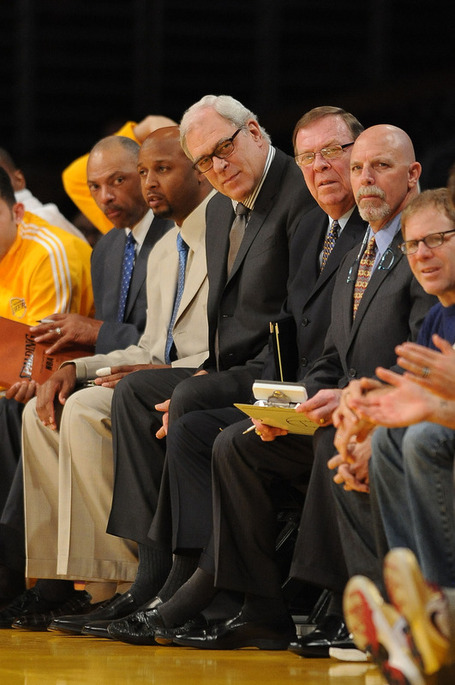 Battle of the suits? No contest.

Despite Curry's shooting struggles, the Warriors were in this game right to the end. This was due largely to the play of their big men. With no Monta Ellis and no Kobe Bryant, the game turned into a clash of the titans in the paint. The Lakers' game plan was clear: dump it into their colossal front line of Bynum, Gasol, Artest and Odom and let them pound it in the paint against their diminutive Warriors counterparts. And with no Monta Ellis to speed the tempo up, Don Nelson decided to fight the Lakers on their own terms: big on big. To their credit, the Warriors big men, lead by the tremendous efforts of Andris Biedrins and Rony Turiaf, took up the challenge and held the Lakers monstrous front line off. The Warriors were badly outrebounded 53-36, but their terrific, physical defense on the Lakers bigs paid dividends. Bynum got his, but Gasol and Odom were held to a combined 8-26 shooting.

In my eyes, the Warriors have nothing to be ashamed of with this effort, not even

Stephen Curry: Curry looked exhausted in this game, virtually from the opening tip. He has struggled mightily with the rookie wall in the last few weeks, with the Clipper game being the exception. Having to pick up the play-making load with Monta Ellis out, and his recent committments at the all-star game, certainly didn't help.

So why did he keep shooting? I feel certain it's because Don Nelson wanted him to. It was instructive to me that Nellie ran a play coming out of a timeout in the fourth quarter that was designed to get Curry a three. Shooters keep shooting, and sometimes they get hot late, even when they've been off all game. It just didn't happen for Curry in this game.

Despite his horrendous shooting night, I think Curry showed tremendous leadership in this game. He didn't let his poor shooting -- or the foul trouble that the ridiculous Flopping Fish goaded the officials into putting on him -- affect the rest of his game. He ran the team well, picking up 8 assists. And he proved his triple-double was no fluke, getting another 10 rebound game. His nose for the ball is incredible.

Corey Maggette: Maggette also struggled in this game, which is perhaps not surprising going against Ron Artest and three athletic 7 footers, with a finger held on by tape. His 6 turnovers and poor shooting certainly cost the Warriors, but I feel nothing but admiration for Maggette for taking the court and battling for this short-handed team that has nothing on the line.

Anthony Morrow: Morrow had a fine night offensively, the Warriors with 23 points on 8-15, including 4-8 from three. Nellie let him work a little one-on-one isolation against Vujucic, and Morrow showed a nice array of moves that singed the Serbian nicely around the edges. Unfortunately, you can't call Morrow's game a success, because his counterpart Shannon Brown picked up a career high 27 points on 11-19, along with 10 rebounds.

I continue to think that Morrow is better served playing closer to the basket on defense, against small forwards.

The Centers: It didn't show up in the box score, but Beans and Turiaf really showed up on defense. Without their tremendous effort and energy the Warriors don't compete in this game.

Anthony Tolliver: I got kind of warm all over when Tolliver buried his first four shots. Unfortunately, he missed his next five. But if you want to know why he didn't get more than 22 minutes, look no further than his 1 rebound. As Nellie likes to say, if his bigs don't rebound, he might as well go small.

CJ Watson: CJ's hot shooting helped keep the Warriors in this game. And he DIDN'T get his layup blocked, despite that idiot Feltbot's prediction. It happened at 4:39 of the fourth quarter, when Watson drove the lane, drew Bynum into the foul, and nailed the fall away shot. Only the foul wasn't called, of course, because it was against the Lakers in Staples with the score now tied 89-89. Don Nelson remonstrated politely.

CJ's gotten a little lost in the turmoil of this crazy season, but he has quietly improved his finishing ability in the paint.

Chocolate Rain was nice, but I'm giving this one to the European Union, Beans and Turiaf. For the dirty work.