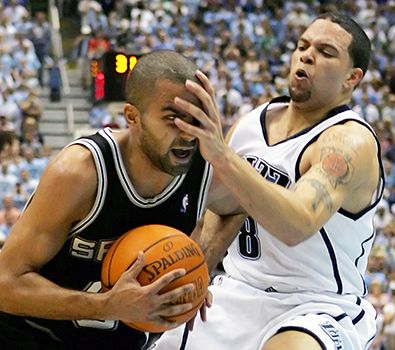 Monta Ellis is still a few days away from playing after sustaining a knee sprain, but I find these games a little more meaningful with him on the bench. By meaningful, I feel like these games with him sitting out function like a crystal ball that foresees ‘the future' of the Warriors if they were to part ways with their "franchise player" of the year (or half season). That is, these games allow us to see what life can be like when Stephen Curry and Anthony Morrow (and others) get the touches and shots that Monta otherwise would have. In the 5 games that Monta has missed, the Warriors team is a decent 2-3, with a marginal loss to the Sacramento Kings at home on January 26th. Granted, those two wins were against subpar talent and with Monta, we may have possibly been 3-2 or possibly 4-1. But the games sans Monta, which the ball tends to circulate a bit more, provides a little more intrigue in a season for the Warriors which has pretty much been decided in the first week of December.

With Morrow and Curry pretty much given free range to shoot and score, what do folks think is possible against a surging Utah Jazz team, with beefy guards and forwards? Will Curry and Morrow offer a glimpse into the future? Or just the sobering reality that the Warriors just aren't that talented?

The Jazz have always been a tough team for the Warriors. And judging their personnel, it's pretty clear why. Carlos Boozer, whose commitment issues to teams make him seem like a candidate for the show "Cheaters," has been putting up his usual numbers lately and his backup, Paul Milsap, looks like he's primed to step right in and be a star, ala Steve Young to Joe Montana, if and when Boozer finally skips town. Together, these relatively smaller undersized power forwards make up for it with all the muscles they have between them. Deron Williams has become my favorite point guard to watch, second to my dreams of what Stephen Curry can possibly become, just because he's got swagger on hundred, thousand, trillion.

But the Jazz are just a disciplined team, which has highly skilled players (Memhet Okur, Boozer, Williams, and Kyle Korver) that stretch the floor. This means the Warriors better rotate and fight through screens best they can. Defensively for this Warriors, this is a tough matchup as the rebounding disparities is almost -8 for the Warriors and the Jazz are a team that narrowly outrebounds their opponents.

There's little room for error with these Warriors and I hope they bring their defensive rebounding effort again tonight. LUCKILY, Okur is not with the team today, tending to his wife who just gave birth to their newborn child. And Deron Williams is apparently shocked, disappointed, and, possibly, frustrated by the direction of the team with the loss of Ronnie Brewer, who he called his ‘little brother.' With other Jazz players also pissed by the trade, will they protest these moves by mailing it in and hitting up Suite 181 early? Could these factors aid the Warriors in another surprise win?

But the two lopsided victories of late against the crappiest of the crap of the league have shown us a more pass-friendly attack where there has been quick ball rotation and cutting leading to higher percentage field goals. With Monta out of the line-up, the Warriors are averaging 24 assists a game and 33 assists per game in the two wins. What I am insinuating from these rough and non-comprehensive stat comparisons is 1) the Warriors are a much better team (to watch) when they pass more (obviously) and 2) the Warriors are possibly much more effective when Monta ISN'T dominating the ball. This is obviously inconclusive evidence. BUT, I will argue that with the ball out of Monta's hands (in these two twins), the Warriors seem to run what seem like play, such as Curry feeding Turiaf in the high post lead to a few nice Tolliver baseline-cutting jams and easy bucks OR the extra passes by Curry to open men on the perimeter for the three. Let us hope the Warriors can do more of this tonight!