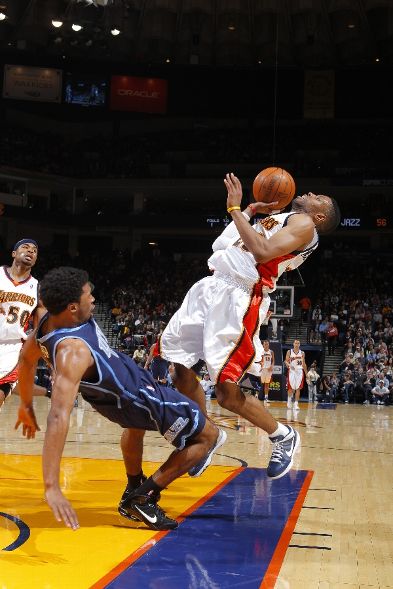 From jump, the ball never seemed to bounce the right way.  Or maybe the Warriors were never in the right position (probably).  The ball always seem to find its way into a Jazz player's hands either off a missed (Warrior or Jazz) shot, a ricocheted/deflected pass, or off Warriors lay-up attempts.  On offense, they looked like the Warriors the other night when they played the Kings; there were tons of easy buckets in transition, constantly clear passing lanes for open jumpers, and an abundance of high percentage shots in the paint.  On defense, the Jazz took away everything that the Warriors rely on which forced a not very good jump shooting team (Warriors) into shooting jump shots all night.  The Jazz did their research.

But it's pretty simple, the Jazz outhustled, outmuscled, and outplayed the Warriors in every which way possible.  From Ronnie Price swooping in over Chris Hunter for an OFFENSIVE rebound to Ronnie Price blocking CJ Watson on a breakaway layup... this is Ronnie f*$$%$#%& Price people!

The game followed the usual script of when the Warriors play a Good Team.  The Warrior stayed competitive for one quarter.  Then the Good Team, in this case the Jazz, begins playing for reals.

And that's precisely what happened.  It wasn't that they just played for reals, they were just a better-coached and better team tonight (and possibly every night).  A 31-10 scoring differential between the Jazz and Warriors in the second quarter pretty much says it all for how awful it got and fast.  In a three minute span to start the quarter, the Jazz outscored the Warriors 13-0 and an 8-3 Warriors run by the end of the quarter cut the lead to 17. 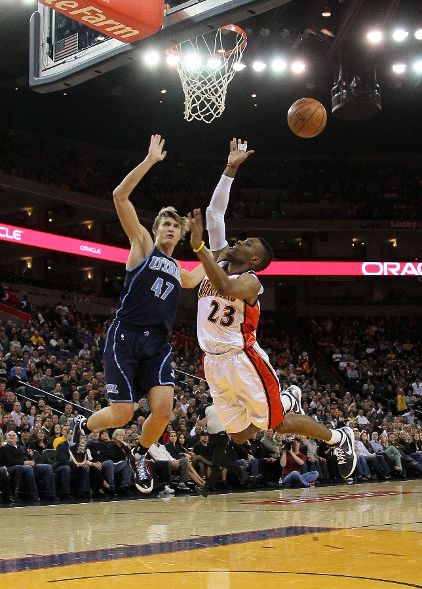 (Kirilenko and Watson perform what looks to be a synchornized dance routine...are we at the ice capades?)

The Jazz closed off driving lanes and Jim Carey in Dumb and Dumber clone, Andre Kirilenko, played the goalie sending back multiple layups from almost everyone that tried to get in there (3 blocks).  Everyone got into passing lanes, deflecting passes to their own teammates to jump start fast breaks or playing free-safety getting into the passing lanes as what I supposed from my angle of the game sitting on my couch, were telegraphed passes from Warriors.

The Warriors rarely got out into the open court, but when they did, there was at least 4 Jazz players already waiting in the paint to draw a charge (2 on Maggette and 1 on Monta) or to block a shot (Milsap, 4 blocks, the Jazz, 10 total blocks).  They suffocated the Warriors in every possible way on defense, leaving little room to maneuver for Monta and Curry, thus disrupting their passing quite easily, and forcing them into rushed shots. Maggette led the way with several 1 on 4 drives that resulted in charges or blocked layups.  The turnovers generated by the Jazz defense and Warriors general negligence with the ball further compounded these problems.  I'm generally okay with Curry's turnovers since I will blame that purely on "rookie mistakes."  But 10 turnovers in one game is atrocious, getting his first five in the first quarter alone!  The turnover situation was so bad for the whole team that the only Warrior to NOT commit a turnover was Anthony Tolliver!

On the offensive end, the Jazz just seemed to confuse the Warriors.  The offensive system that the Jazz ran where players are continuously screening away or their continous highpost double screens followed by one of the screeners cutting straight to the hoop confused the Warriors all-night long.  As a result, the Jazz frequently found an open man in the soft spots where the Warriors weren't watching.  Deron Williams and Carlos Boozer ran the pick and roll like you were watching John Stockton and Malone (except with longer shorts) and Boozer converted most his shots within 5-10 feet of the bucket.  Boozer is tremendous player, but I really got to give it up to the coaching.  Aside from a few of 20 foot turnaround fadeaway jumpers, I believe the system he's playing within continuously got him in the right position in open space to make plays and baskets.  Same goes with Kirilenko, who managed to have what looked to be at least 4 wide open dunks, several from backcutting.  Though, part of the reason was that the Warriors lacked a big man strong enough to hold off Boozer alone (not many NBA players can I suppose), often requiring a double team which of course leaves someone wide open.

The 4th quarter ‘comeback' was a too little, too late.  The nice barrage of threes by Tolliver and Devean George didn't quite make up for Tolliver's god awful shooting earlier in the game, bricking 3 wide open shots within a span of 2 minutes.  He seems like a guy that hustles, but he might be the worst designed "shooter" the Warriors have had since Mike Dunleavy Jr. 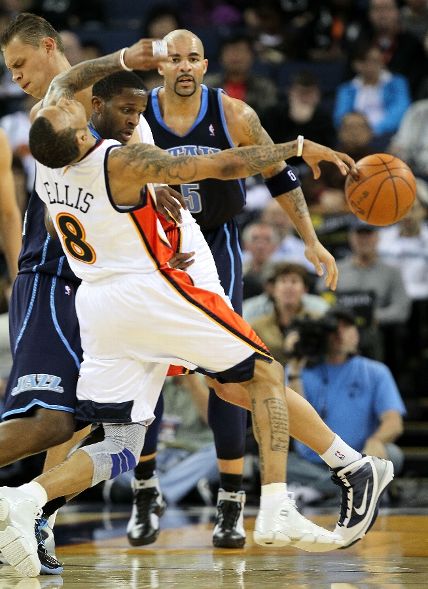 (Judging by Monta and Andris Biedrins' faces, the Jazz guards, like Wesley Matthews, are TOUGH like Boozer)

Simply put, the Jazz were just a superior team.  Not just talent-wise, but as far as the type of offensive and defensive schemes that they're operating.  Or maybe it's just a match-ups issue given the height, muscle, and skill.  But for some reason, it always seemed that CJ Miles was wide open for an uncontested three.  For that, I believe the Warriors have quite a ways to go before contending with some of the West's best.

CJ Watson deserves it once again.  Whether he's coming off the bench or starting the game, Watson can be a very effective scorer (though not much else).  Watson scored 22 points.  He's got a knack for steals, which seems to be a Warriors guard thing, as he had 3 steals tonight to go with his scoring.  Plus, he deserves for the upcoming Mohawk day at the Roaracle!