Share All sharing options for: GameThread #55: Warriors vs. Hawks - Welcome Back JC! 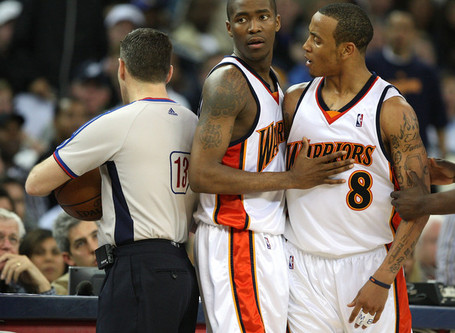 Yo JC - let me holla at you bout this 6-8 backcourt. It ain't gonna work man.

Sooooo we got demolished by the Jazz on Friday. Who didn't see that coming? But let's look at the bright side, we're getting closer and closer to winning the John Wall sweepstakes and trading off Monta Ellis to a needy team for big Center and talented SG....oh wait, we didn't pull the trigger on that.

Sigh..who needs some Curry and Mayo in the backcourt? Not us!

But whatever, let's move on to happier things.

Tonight marks the return of the fan-favorite Jamal Crawford. In his few months here as a Warrior (obtained from New York in the Al Harrington trade), he showed his ability to be a volume scorer while exemplifying the epitome of class.

Want some proof? Check the jump for my favorite snapshot of JC. 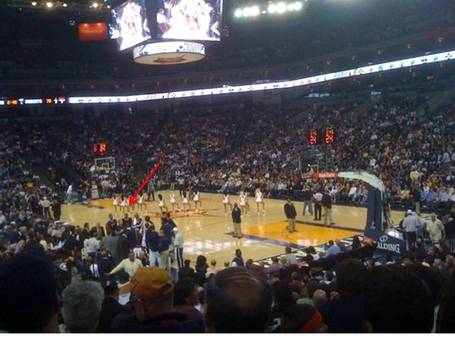 Photo courtesy of R Dizzle, 2009
Now, to the average fan, this picture would make no sense. It would just be a normal picture from a normal fan. A quick snapshot of the Warriors bench. But, to the more trained eye, the viewer can see that the red arrow points to Jamal Crawford in a suit. Why was he not dressed for the game? Was he injured? No. He was currently enrolled in Don Nelson's Rest-a-Vet program of late last season. Best part about it - he did it without complaints.
Anyway, let's take a quick jump to our SB Nation Blog Buddy's (Peachtree Hoops) Preview.

Hawks Injury Report: Zaza Pachulia and Mike Bibby both could be described as "half dead" at this point.

Warriors Injury Report: Possibly everyone but the starting guards will not be playing tonight. Luckily for the Warriors they can and enjoy shooting.

Blogging With the Enemy: Golden State of Mind

Predicted bane of the Hawks existence: Monta Ellis's 18 shots that go in (not to be confused with the 25 that do not).

A confession to begin. I love Stephen Curry with the fire of a thousand Zaza Pachulias. Not exaggerating. I went to Davidson and will root for number 30 for a long time. I hope he has a triple double tonight. And of course I can hope for this because Curry could put up such unbelievable stats and Golden State could still lose by 30.

They have countless players (when healthy) that can fill up an offensive box score like the opposing defense wants them to do it. The problem is that any notion of team is rarely seen so the multitude of threats is normally only seen through one guy a game. Oh, and they hate defense.

That being said, ORACLE will never be an easy place to play, and offensive threats don't always need to play as a team to work. Sometimes another player will score in bunches despite Monta Ellis' best efforts.

But that that being said, if Josh Smith is going to pull of a 5x5, it is going to be against the Warriors. He has two chances. Might as well do it on national tv.

In the end, the Hawks may go down 20 in this game. It shouldn't matter. Not giving up is all that matters. Making the extra pass should lead to easy buckets every time down the court and trying hard will more than likely allow for a second easy attempt if the first one misses.

Holy cow if we lose this game, the fire of a thousand Stephen Curry's might come out (and so yes, if you are keeping track that would be the fire of 10,000 Zaza's.)

The reality of hawksdawgs preview makes me want to cry.

What was a better backcourt?