Well here's another one to track for the history books. 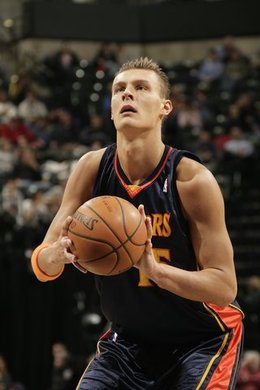 From start to finish everything about this shot is just WRONG.

Over at SFGate Scott Ostler notes:

Biedrins is 3-for-23 from the line this season. The NBA record low percentage, one season, for a player shooting at least 20 free throws, is held by Garfield Smith, Boston Celtics, 1971-72, shooting 6-for-31 from the line, 19.4 percent. Biedrins is barely better than 13 percent.

Nellie has theorized that the free throw woes are having serious consequences for Biedrins' offensive game (if that's what you want to call it) [SFGate]:

Since his 18-rebound, three-block effort Feb. 6, Warriors center Andris Biedrins has averaged 4.8 points, 6.3 rebounds and 0.5 blocks a game. "He doesn't seem to want to go to the free-throw line, so he is staying away from the moves and places that give him a chance to get fouled," said coach Don Nelson, who pointed to Biedrins' 3-for-23 free-throw shooting.

We've discussed and written this countless times in the past, but it's completely inexcusable how poor of a jump shooter Biedrins is in his 6th season in the league. It simply shows his lack of commitment to the game of basketball. The jumpshot is one of the most fundamental aspects of this game and there is nothing fundamentally right about Biedrins' form. If you've never seen Biedrins shoot a free throw, then don't. Everything with it is mechanically wrong as Nellie has noted in the past (flip to the 2:24 mark).

"He shot one jump shot since I've had him, and I made him shoot that," Nelson said. "I set up a play. For whatever reason, I said, 'Now, you're going to shoot the jump shot.' He did. He missed it. It's the only jump shot I remember him shooting."

It is indeed frustrating to have the second highest paid player on this team, a guy whom Mullin, Rowell, a ton of the local/ national media and fans alike couldn't wait to build around have ZERO commitment or dedication to getting the simplest jump shot on par with the ball-hoggers on middle school playgrounds. Seriously, does this guy ever even pick up a basketball and shoot around?