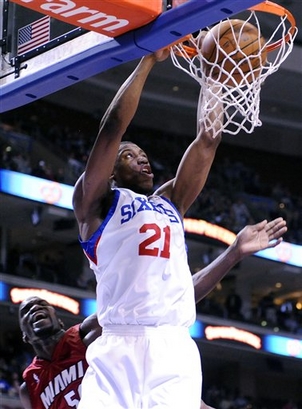 The last time these two teams met the Warriors were on their fifth game of a brutal East coast road-trip in mid-December. And they got blown out 117-101 -- playing, in the immortal words of then-coach Keith Smart, "like a horse trying to get back to the barn." I expect this game to be a lot more competitive. The Warriors will be out for sweet revenge.

In the last game, the Sixers went small, with Thaddeus Young at power forward. And the Warriors had no answer for the quick-leaping Young, who went off for 26 and 14. Fortunately for the Warriors, 76ers coach Eddie Jordan has seen the light, and returned Elton Brand to the starting lineup. (The light of the trading deadline? The light of management's rifle scope?) I think Brand, at this point in his career, is a much better matchup for Anthony Tolliver than Young. 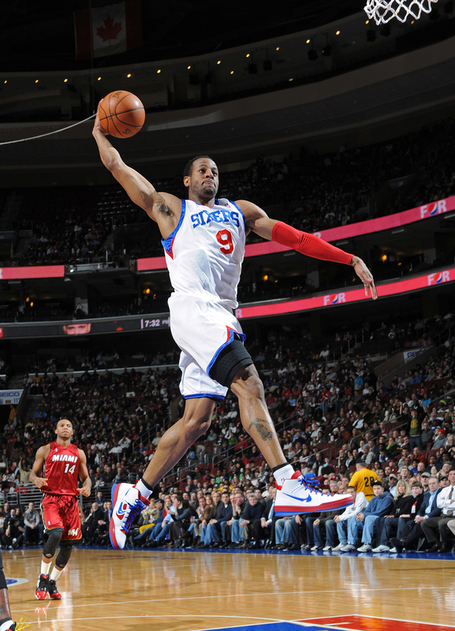 Monta can take him... Right?

Monta Ellis, I'm guessing, will be asked once again to guard Andre Iguodala. It sounds bad, but in the last game, Monta strapped a 4-20 on Iggy's back. Iggy ain't shooting great this year, at 43% and 31%, so Monta's job will be to disrupt the dribble, discourage penetration, and keep him gunning.

The rest of the matchups, so far as I can tell, favor the Warriors. Willie Green has been out with an injury, and Allan Iverson is home on personal leave (and if the rumors are true, may have played his last game with the Sixers). So the Sixers are likely to be just as small in the backcourt as the Warriors, with Lou Williams joining Jrue Holiday.

Andris Biedrins will be matched with Samuel Dalembert, and Chris Hunter should get some play as well. Nellie is quoted in yesterday's Chron as saying that Hunter will get 12-15 minutes for the rest of the season, so the Warriors can evaluate him. Will Hunter and Biedrins play together in the fourth quarter, as they did in the Warriors stirring comeback win against the Hawks? I doubt it, particularly if the Sixers go small with T-Young the Warrior killer.

The Sixers are favored by one in this game. They've been playing somewhat better as of late, winning five straight before losing three out of four. But so have the Warriors, who have won three of their last five. That line is flat-out disrespect. Maybe the bookies expect the Sixers to get a "Whoopee, Iverson's gone!" bounce, like Memphis did earlier this season.