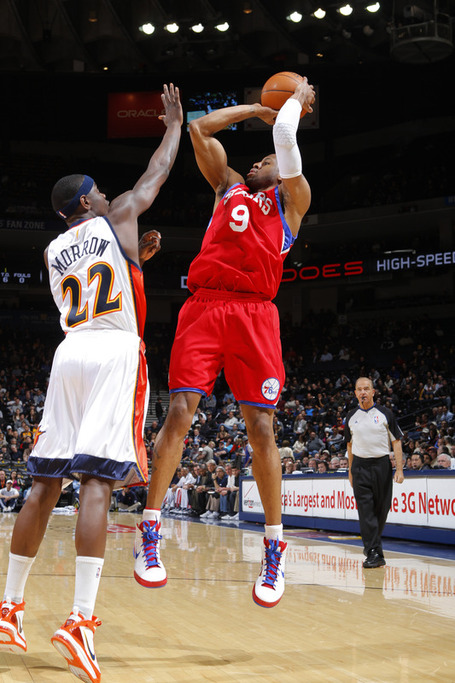 Nor did the Warriors lose this game because of poor defensive effort. The Warriors half-court defense -- clearly employing a pack-the-paint gameplan -- was quite good, as evidenced by the stat lines of the Sixers' big men, who were expected to dominate inside. Samuel Dalembert was 1-5, Elton Brand 6-14, Marreese Speights 3-8, and Thaddeus Young, who killed the Warriors in the last game, was held to 3-8.

Jump for the bad stuff:

This game was about shooting. Don Nelson wanted to force the Sixers -- one of the poorest shooting teams in the league -- to shoot from outside, and shoot they did. Unfortunately, they couldn't miss. The Sixers shot 54% in the first half, and 48% in the game, including an incredible 9-20 from three. Lou Williams, a career 31% shooter from three, was the deadliest of all, hitting 5-8 from behind the arc, including the dagger with 15 seconds left that put the Sixers up 6.

The Warriors, on the other hand, one of the best shooting teams in the league, couldn't buy a shot for the first three quarters of this game. They shot 37% in the first half, and 38% for the game, despite an incredible run in the fourth quarter. Stephen Curry, shooting 42% from three in his rookie season, made one in the fourth quarter to finish 1-8 from behind the arc. While the Sixers were shooting daggers, the Warriors were putting up goose eggs.

The shooting disparity wasn't the total story, though. There was one other huge reason the Warriors lost this game: 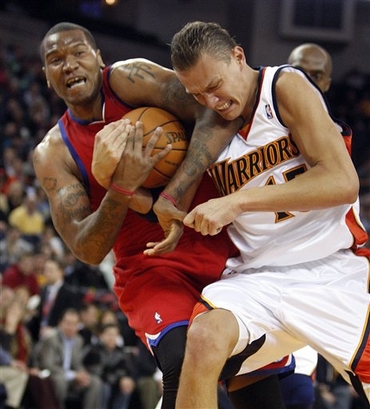 About to take a seat

The Centers: If you want a reason why the Warriors shot an incredible 33 three pointers in a game in which they couldn't hit a shot for three quarters, you don't have to look any further than at the play at Andris Biedrins (nicknamed "Goose") and Rony Turiaf. Goose and Turiaf both laid eggs in this game, shooting 0-2 and 0-3, respectively. Their inability to complete a simple pick and roll absolutely kills the Warriors half-court offense. This failure is particularly glaring because of the fact that they are playing with two guards who for different reasons are among the best partners for pick and roll in the league. Monta because both defenders always go to him, Curry because of his extraordinary passing ability, and both because they can bury the midrange jumper. The Warriors should be running pick and roll almost every possession to initiate their half-court offense. Goose and Turiaf are not letting them.

Biedrins is the worst offender of the two, because he simply refuses to run it. His fear of getting fouled and sent to the free throw line is now so extreme that he won't even look at the basket when he gets an offensive rebound. He either holds the ball, looking for a pass, or throws up an ugly brick from outside his range to avoid contact. Last season, Biedrins averaged 8.6 FGA, this season 4.2. Last season, he shot 3.5 free throws a game. This season, he's shooting a pathetic 0.8.

Biedrins is absolutely killing the Warriors on offense. I'll say it straight out: he's playing like a coward. I'd like to see whether he was benched in this game as a result of his hard fall battling Speights, or because Don Nelson finally couldn't take it anymore. The Warriors are absolutely desperate for a big man who can play pick and roll with Curry and Ellis. Desperate. Biedrins and a lottery pick for Stoudemire? I'd do it in a heartbeat. Biedrins and John Wall for Stoudemire? Yes, yes, yes. Its time for Andris Biedrins to face his demons, step up, and play like a man. Or else he's gone. Guaranteed.

Turiaf is a little better than Biedrins, because he is at least trying. Nevertheless, he blew two pick and rolls outright in this game, by failing to catch the ball. And pulled up and missed a mid-range jumper on the one he did catch.

The man fresh out of the D-League, Chris Hunter, is the Warriors best option in the pick and roll at the moment, which is a sad statement. Hunter has great hands, and takes the ball to the rim like a man. He got his And One at 2:04 of the first quarter. At this point, I make Hunter a solid favorite over Biedrins to remain in a Warriors uniform next year.

Stephen Curry: Curry had an interesting game. It's pretty clear to me that he is struggling mightily against the rookie wall. He looked like he was running through mud in this game. For three quarters, he couldn't hit a shot. His play to start the game was extremely tentative, and I believe led to his benching.

Don Nelson sent Curry a clear message in this game. Nellie wants his point guards to be aggressive. And he has another rule: if you miss three straight jumpers, you have to drive the ball the next time you get it. Curry didn't get this in the first half. But he was a different player in the second half, and in particular in the fourth quarter. In a stretch of the fourth quarter beginning at 8:36, Curry took the ball to the basket three straight possessions. In the first, he got his shot blocked. In the second, the defender knocked the ball out of bounds. In the third, Curry got to the basket for a fantastic left-handed finish to cut the lead to 10.

After the timeout, Curry buried his first three of the game. Then he drove -- and finished -- twice more.

Monta Ellis: I think it's pretty clear that Monta came back a little early from his sprained knee. He's not all the way there, and it shows in his inability to hit his jumper, and in his defense. Nellie gave him a break on D in this game, not putting him on Iguodala until the fourth quarter.

His diminished quickness may also have contributed to his foul trouble. Although that fourth foul in the first half was simply a stupid mental error.

If you're wondering why Nellie left him in when he picked up that foul, and then later left him in when he picked up his fifth foul, it is simply this: when you are losing a game big, the percentage play is to leave your best player on the floor and trust him. Its not dissimilar to the situation where you have the worst team in the Super Bowl, and the percentage play is to go for it on fourth and goal, and onside kick to start the third quarter. 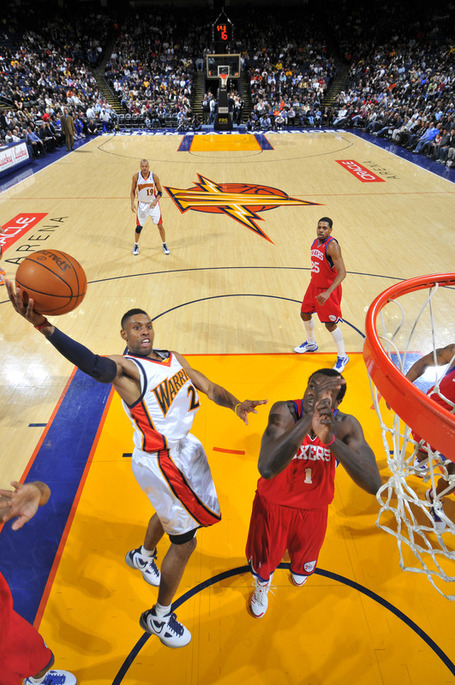 Quick Hits on the Supporting Cast:

This one goes to the Silent Assassin, CJ Watson. Not just for this game, but for his explosive improvement as a player in the last six games.