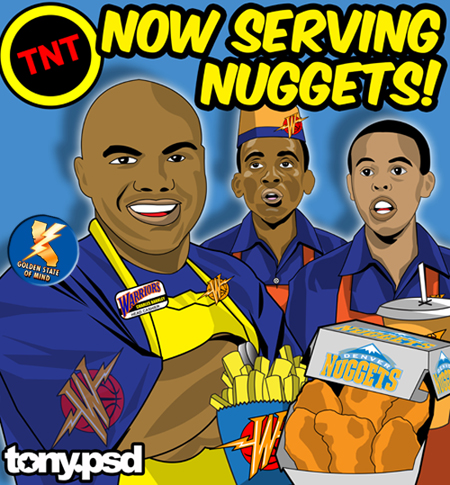 JUMP for some preview madness.

Over at Denver Stiffs Andrew Feinstein breaks down the Warrior stiffs:

-Anthony Randolph: Proof that the great Bill Simmons doesn't always know what he's talking about is Randolph's piss-poor performance in 2009-10. Whether it's the result of injury, being in Nellie's doghouse, being a head case or all of the above, Simmons anointed Shawn Kemp 2.0 has been out with a sprained ankle since January 11th and wasn't playing well before that. I can't help but think of all the guys who drafted Randolph early on their fantasy teams because of Simmons' advocacy for him.

-Vladimir Radmanovic: I have a sneaky suspicion that Vlad Rad will be exercising his $6.8 million player option for next season. How the Warriors got duped into taking this guy's salary - and his 38.5% field goal shooting - on boggles the mind.

-Devean George: I remember when George was getting a lot of press for playing great on the 2003-04 Lakers alongside Shaquille O'Neal, Kobe Bryant, Gary Payton and Karl Malone. At the time, TNT's Charles Barkley aptly said: "They could put George of the Jungle on that team and he'd play well." So true.

I will add to the stiff-ness by calling out the Warriors front office and delusional fans (many of the bandwagaon jumpers).

I've said it million times in the past and I'll say it again. Is there any other franchise out there dumb enough to build around a turnover prone, undersized shooting guard who isn't much of defender (though vastly improved this season) and an undersized, soft center with ZERO low post moves or even the slightest semblance of a jump shot? Was it really worth breaking up WE BELIEVE for this?

The current Big D (Big Drama) in Dubs Land is Warriors head coach Don Nelson calling out Andris Biedrins. There is very little I disagree with that Nellie said. He was on incredibly point especially with his insights on the hoops technicalities. 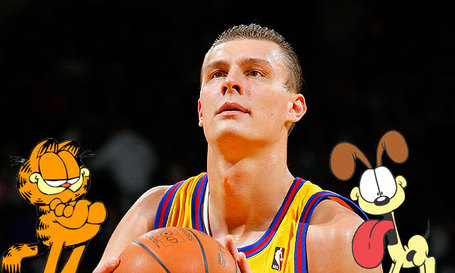 The thing is I'm not conviced that publicly calling Biedrins out was the best idea. Now I know Nellie is frustrated especially when he revealed that he's tried a multitude of strategies with him to no avail [SFGate]:

"I've worked with him. I've had everybody work with him. He's locked in to . . . he doesn't want to go underhanded, and his over-handed shot is basically broken. He's never going to be a very good free-throw shooter because of his technique. It's unfixable. You can't fix the problems that he has. To me, I would go underhand. We brought (ex-Warrior center) George Johnson in here (to teach the under-handed shot), and (Biedrins) decided not to do that. I tried the one-handed free throw with him, but that doesn't work because his technique is, he doesn't keep his hand on a platter (with his open palm parallel to the ground before shots), which all great shooters do. He tilts it, so if I have him shoot one-handed, the ball's going to slip off, so there are major problems with his technique, and he's not willing to change."

Now I know Biedrins has basically gotten the kiddie gloves his entire time here from the front office (ZERO tough negotiations vs the other players, particularly the WE BELIEVE cast) and the fans (infinite annoying and absurd excuses for his lack of development or commitment to the game of basketball- you know the finer things in life like shooting a 4 foot jumper with decent form). But is calling him out publicly the right way to reach him? I don't think so. It just doesn't seem like the right way to reach him. Hopefully I'm wrong. I can definitely understand this approach though as Nellie and the coaching staff seem to have tried everything else.

But enough depressing stories about this depressing Warriors franchise. Let's get down to the positives for the Warriors coming into tonight's nationally televised affair:

More on the Denver Nuggets:

Can you shoot free throws better than Andris Biedrins?